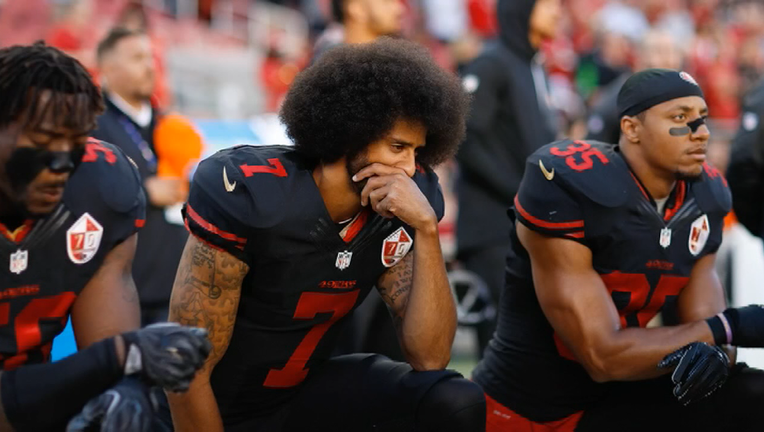 A police officer at Colin Kaepernick's alma mater in Nevada dressed up as the former 49ers for Halloween, mocking his stance on the national anthem and wearing a hooked nose that has prompted an apology from the school and calls of racism.

The University of Nevada, Reno police chief sent a statement apologizing for the behavior of Officer Antonio Gutierrez. The officer is seen in a photo circulating on social media in a red shirt with Kaepernick's former number of 7 and wearing a sign that says "will stand for food."

Kaepernick has not been hired to play for any team ever since he began taking a knee during the national anthem last summer to bring attention to the unfair treatment of people of color in this country, especially by police.

"For those who have seen the Halloween costume of one of our officers apparently mocking a citizen who has chosen to take advantage of his constitutional right to protest, I offer my sincere apologies," UNR Police Chief Adam Garcia said in a statement sent to media outlets, including Buzzfeed News. "Members of our profession are held to a higher standard and denigrating another -- on or off duty -- is insensitive for its lack of respect and lack understanding on how others may negatively view their actions and may be impacted."

Garcia added: "Behavior such as this magnifies unsafe feelings and lack of trust in police, especially when that individual is responsible for the safety of all members of the University, regardless of color, ethnicity, sexual orientation or religion," Garcia said in his statement. "At a time when officers should be heightened in their attentiveness to the perception by our community, this act seems extremely out of touch with those sentiments and reflects poorly on all of us."

BuzzFeed News noted that the officer will not face disciplinary action.

On social media, some took Kapernick's side, and others said he deserved it.