Comedians and movie buffs across the country are in mourning as they found out about Gilbert Gottfried’s death Tuesday.

LOS ANGELES - Comedians and movie buffs across the country are in mourning as they found out about Gilbert Gottfried’s death Tuesday.

"We all knew he was not well, but not that sick," said comedian Paul Rodriguez.

Outside the Laugh Factory, the iconic comedy club’s marquee reads "Gilbert Gottfried RIP" shortly after the comedy icon’s death at 67. Gottfried’s publicist revealed he suffered from a rare genetic disorder that sometimes results in cardiac arrest. 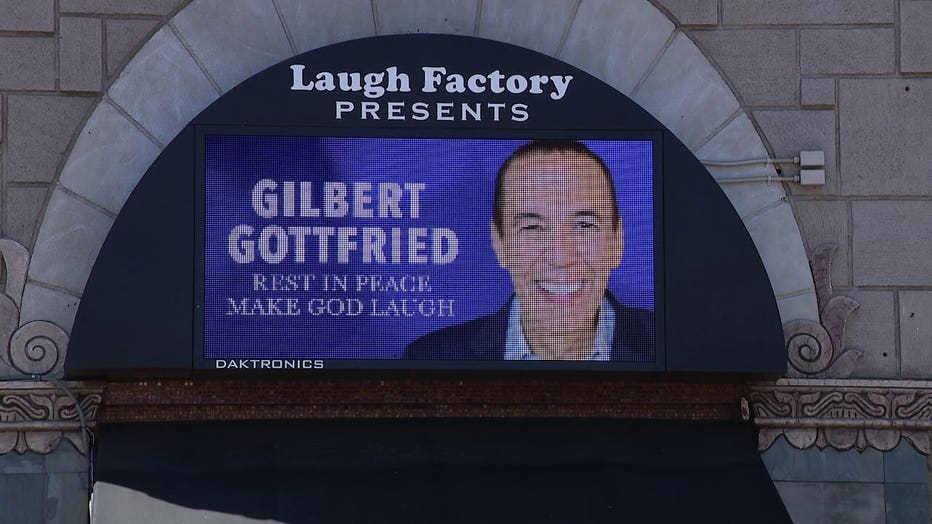 The marquee at the Laugh Factory pays tribute to the late Gilbert Gottfried. (FOX 11)

"He had canceled some dates," Rodriguez said.

Rodriguez remembers how eerie it felt when he saw a recent tweet by Gottfried, which showed a selfie with the late Louie Anderson and the late Bob Saget.

Fans outside the club reminisced about the man whose voice on Aladdin’s parrot, Lago, launched a career that included memorable movies, TV shows, commercials (I mean, who can forget the Aflac Duck?) and the comedy circuit.

But those who knew him personally remembered how friendly and helpful he was to everyone he knew.

"Even when he was controversial," said one fan. "You had to love him."

Gottfried is survived by his wife, the couple’s two teenaged children and legion of adoring fans.