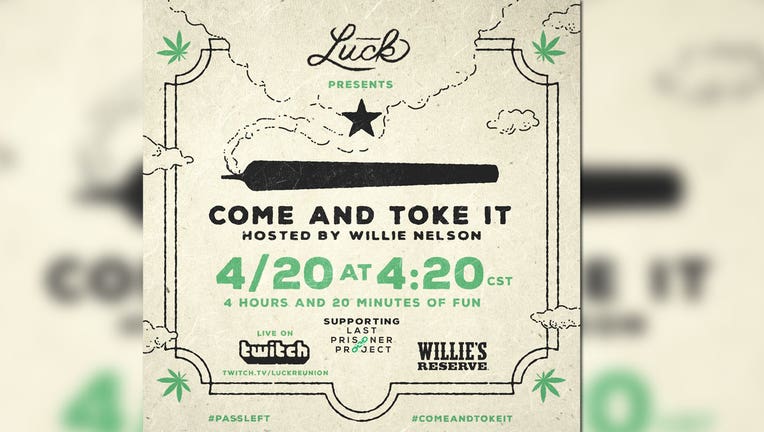 NOWHERE, Texas - Luck Productions is presenting a new variety show as part of its ongoing live programming and it'll be in honor of Willie Nelson's favorite "holiday".

"Come And Toke It" will be held on April 20 (4/20) beginning at 4:20 p.m. CT and be hosted by the country singer himself. Nelson will be joined by other artists, chefs, comedians, and cannabis experts during the live-streamed program, which is expected to run for four hours and 20 minutes.

Get breaking news alerts in the FOX 7 Austin News app. It is FREE!

Luck is also joining forces with Willie's Reserve to launch the #comeandtokeit #passleft challenge which is giving people the opportunity to knock something off many people's bucket lists. Whether you partake or not, Luck is asking fans to post a video of themselves passing (whatever material of their choice) to the left with the hashtags #ComeandTokeIt and #PassLeft.

The event is also being held in support of The Last Prisoner Project which is aimed at helping bring restorative justice to the cannabis industry. You can get more information about the organization here

One lucky participant will be randomly selected to talk to Nelson, live on air, and get to wish the musician an early happy birthday during the broadcast.

The event will stream live on www.luckreunion.com/comeandtokeit and on www.twitch.tv/luckreunion.

Details about talent and performances will be released via Luck Reunion's social channels.