After 24 years of searching for their kidnapped son, a Chinese family was reunited with their abducted son. (Credit: Criminal Investigation Bureau of the Ministry of Public Security via Storyful)

BANGKOK (AP) - After 24 years of heartache and searching, a Chinese couple were reunited with their son who was abducted as a toddler outside their front gate.

Guo Gangtang and his wife, Zhang Wenge, hugged their 26-year-old son with tears in their eyes Sunday at a reunion organized by police in their hometown of Liaocheng in the eastern province of Shandong, according to a video recording released by police.

The story of their reunion after Guo crisscrossed China by motorcycle searching for his son and became an activist who helped police return other missing children to their parents prompted an outpouring of public sympathy and condemnation of abductions.

Guo Xinzhen, then age 2 1/2, was grabbed by a woman and her boyfriend who took him northwest to Hebei province, which surrounds Beijing, the Chinese capital, according to police. From there, he was sold to a couple in central China.

Abductions of children for sale are reported regularly in China, though how often it happens is unclear.

The problem is aggravated by restrictions that until 2015 allowed most urban couples only one child. Boys are sold to couples who want a son to look after them in old age. Girls go to parents who want a servant or a bride for an only son.

Police experts found Guo Xinzhen in June by searching databases for images of people who looked like he might as an adult, according to a police ministry statement. His identity was confirmed by a DNA test. 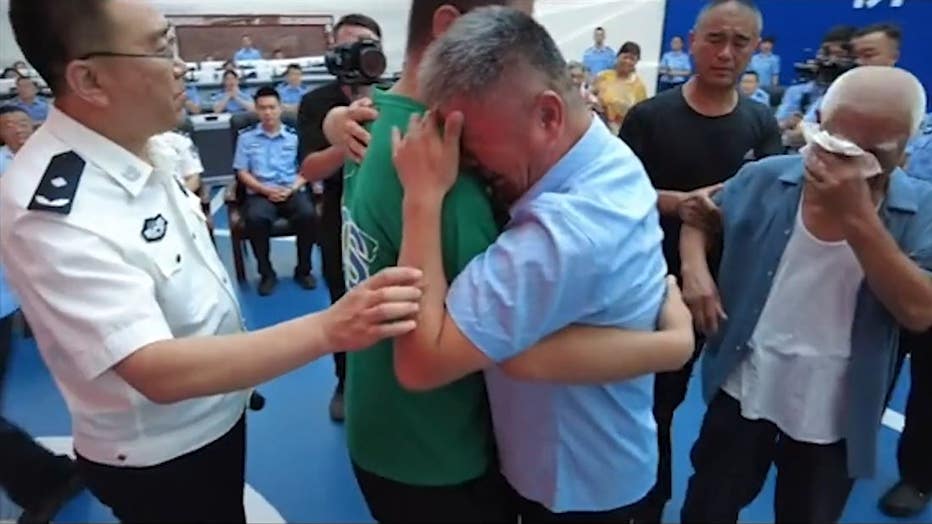 After 24 years of searching for their kidnapped son, a Chinese family was reunited with their abducted son. (Credit: Criminal Investigation Bureau of the Ministry of Public Security via Storyful)

The woman and her boyfriend, identified only by the surnames Tang and Hu, were caught and confessed to trafficking three boys, according to the ministry. They have yet to stand trial, but potential penalties range up to death.

Blood samples from Guo Xinzhen's parents were added to an "anti-abduction DNA system," but no matches were found with boys who were believed to have been abducted, the police ministry said.

Kidnappers target children who are too young to know their names or hometowns and sometimes even that they were abducted.

"So happy for Mr. Guo," said a post signed Ding Dalong on the Zhihu social media platform. "He found his long-lost son and can move on with his own life."

Others called for buyers of trafficked children to be punished. There was no word on whether the couple who bought Guo Xinzhen would face penalties.

Guo Xinzhen grew up in Henan province, according to police, but no other details of his life have been reported. It isn't clear whether he knew he was abducted.

His mother, Zhang, described her despair in a 2015 television interview.

Guo Gangtang, now 51, started his search carrying a flag with his son’s photo and details, including "a scar on his left little toe."

Guo wrote on his social media account that he wore out 10 motorcycles riding through 30 of China’s 34 provinces and regions.

According to news reports, he operates a shop in Beijing that sells artwork. He received financial help from his father, who kept working into his 70s, and other relatives.

Guo started a website in 2012 and a charity in 2014 to help other parents of abducted children, according to news reports.

"Thank you for participating in anti-trafficking activities for 24 years and helping more than 100 children return home," the police ministry said on its social media account.

"Only when I am on the road do I feel like a father," the character based on Guo was quoted as saying in the movie’s advertising.

The couple had two more sons, but reporters said Guo wanted them to think Xinzhen was an only child. That would add to the emotional impact of his search.

In a video on his social media account, Guo said he was worn out from public attention and wanted to give no more interviews.

In the 2015 TV interview, Guo said he nearly fell over a cliff when he was blown off his motorcycle in a rainstorm.

Guo Xinzhen said he will stay in Henan but plans to visit his biological parents regularly, according to news reports.

"He is a great father," Guo Xinzhen was quoted as saying to reporters. "I am proud of him."