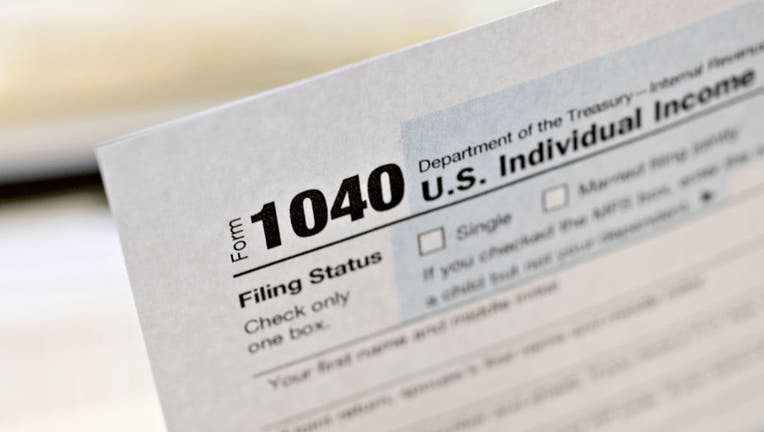 FILE - A U.S. Department of the Treasury Internal Revenue Service (IRS) 1040 Individual Income Tax form for the 2019 tax year is arranged for a photograph in Tiskilwa, Illinois, on March 20, 2020. Photographer: Daniel Acker/Bloomberg via Getty Images

Although the IRS paid out the last monthly installment of the expanded child tax credit in December, millions of parents should be on the lookout for a letter from the agency that will help them collect the remaining half of the money when they file their 2021 tax returns.

Families that received monthly installments of the boosted child tax credit last year will receive a letter – called Letter 6419 – from the IRS informing them of the total amount of the advanced payment they received and the number of qualifying children used to calculate the payments.

Because at least half of the enhanced credit will be paid out as a lump sum when parents receive their 2021 tax return, recipients should keep the letter and use it to accurately reconcile the credit they already received when filing their taxes this year. The information is pertinent to determining how much more money families receive from the credit when they fill out Schedule 8812 and Form 1040.

The IRS said earlier this month that it began issuing letters on child tax payments and will continue through the first part of the new year. An estimated 36 million Americans received the payment last month.

People who received the monthly payments can also check the amount of their payments by using the CTC Update Portal.

If families opted out of the monthly payments, they can claim the full amount of the child tax credit on their 2021 federal tax return. This also applies to families who don't normally need to file a tax return.

The IRS is warning taxpayers of a potentially challenging tax season and has urged individuals to file their tax returns electronically in order to receive the refund within 21 days.

Democrats temporarily expanded the child tax credit in early 2021 as part of a sweeping coronavirus relief package, but it expired at the end of the year. Under the expansion, low- and middle-income parents could receive up to $3,000 for every child ages 6 to 17 and $3,600 for every child under age 6. The payments were income-based and began to phase out for individuals earning more than $75,000 and married couples earning more than $150,000.

The first half was delivered in monthly payments from July to December with $300 for children under the age of 6 and $250 for those ages 6 to 17, but the last check was mailed out last month. The second half will be delivered as a lump sum when families file their 2021 tax returns in the spring. The IRS said that 36 million families received the payments each month, or about 60 million children.

Without the enhanced tax credit, an estimated 10 million children are at risk of falling below the poverty line, according to an analysis from the progressive think tank Center on Budget and Policy Priorities.

Although President Biden and most congressional Democrats hoped to extend the boosted program for at least another year with the passage of the $1.7 trillion Build Back Better plan, momentum for the massive social spending and climate bill crumbled after moderate Sen. Joe Manchin, D-W.Va., abruptly withdrew his support last month, citing concerns over inflation and the growing federal debt.

"I cannot vote to continue with this piece of legislation. I just can't. I tried everything humanly possible. I can't get there," Manchin said during an interview on "Fox News Sunday" in December. "This is a 'no' on this legislation."