Chief Justice John Roberts and all 100 senators were sworn-in Thursday as the impeachment trial for President Donald Trump begins.

Roberts, who made the short trip across the street from the Supreme Court to the Senate chamber, administered the oath to all 100 senators who will serve as jurors and swear to deliver “impartial justice.”

“Do you solemnly swear that in all things appertaining to the trial of the impeachment of Donald John Trump, president of the United States, now pending, you will do impartial justice according to the Constitution and laws, so help you God?” Roberts asked.

The senators responded from their desks and were then called up to sign the oath book.

Earlier Thursday, the seven-member prosecution team, led by the chairmen of the House impeachment proceedings, Reps. Adam Schiff of the Intelligence Committee and Jerrold Nadler of the Judiciary Committee, walked across the Capitol for a second day. 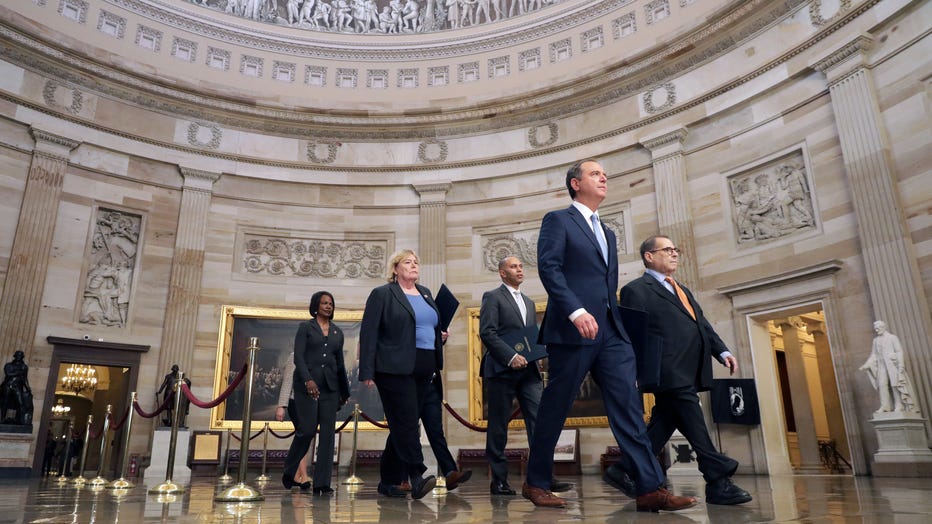 The seven impeachment managers walk through the Rotunda of the U.S. Capitol on their way to the U.S. Senate on Jan. 16, 2020 in Washington, D.C. (Photo by Chip Somodevilla/Getty Images)

“With the permission of the Senate, I will now read the articles of impeachment,” Schiff said to senators before reading all nine pages.

After Roberts and the senators were sworn-in, Trump spoke to members of the press from the Oval Office, with some reporters asking him what he thought of the whole process.

He continued to call it a “hoax.”

On Wednesday, the House approved the prosecution team named by Speaker Nancy Pelosi and voted 228-193, almost entirely along party lines, to send the articles to the Republican-majority Senate for trial. 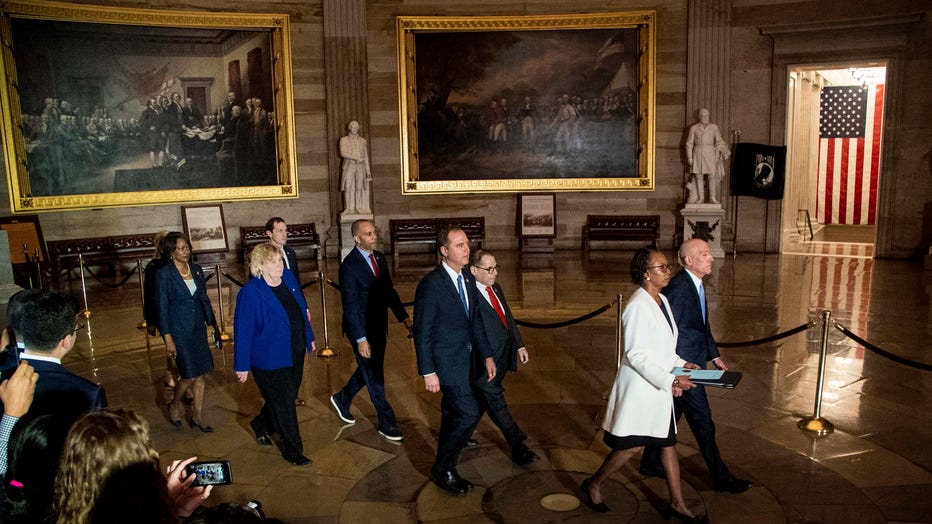 The seven House impeachment deliver the signed articles of impeachment to the Senate in preparation for the upcoming trial of President Trump on Capitol Hill in Washington, D.C. on Jan. 15, 2020. (Photo by Melina Mara/The Washington Post via Getty Im

Trump was impeached by the Democratic-led House on Dec. 18 on charges of abuse of power over his pressure on Ukraine to investigate Democratic rival Joe Biden as Trump withheld aid from the country. Trump was also charged with obstructing Congress’ probe.

“This is what an impeachment is about,″ Pelosi said before the vote. “The president violated his oath of office, undermined our national security, jeopardized the integrity of our elections.”

He is the third president to be impeached in U.S. history. The other two were Bill Clinton and Andrew Johnson.

The seven lawmakers prosecuting the charges are a diverse group with legal, law enforcement and military experience. It also includes Hakeem Jeffries of New York, Sylvia Garcia of Texas, Val Demings of Florida, Jason Crow of Colorado and Zoe Lofgren of California.

McConnell pledged to have the Senate “rise above the petty factionalism” and “factional fervor and serve the long-term, best interests of our nation.'' He called it “a difficult time for our country.”

As McConnell set the rules for the trial, Trump gave mixed messages about whether he prefers a lengthy or swift proceeding, and senators are under pressure with the emerging new evidence to call more witnesses for testimony.