SACRAMENTO, Calif. - California has regained more than half of the 2.7 million jobs it lost at the start of the coronavirus pandemic, officials said Friday, a trend driven by restaurants and hotels hiring more people as the nation’s most populous state reopens its economy.

Employers added 104,500 new jobs in May as California’s unemployment rate dipped slightly to 7.9% from 8% in April. It’s still one of the highest unemployment rates in the nation, but it is the fourth month in a row that the state has added at least 100,000 new jobs.

California has now regained 1.4 million jobs from the depths of April 2020, when a stay-at-home order had forced many businesses to close.

A third of those gains have come from the leisure and hospitality industry. Since May 2020, restaurants and hotels have added 420,400 jobs, the most of any sector. But the industry is still about 450,000 jobs below its pre-pandemic high. 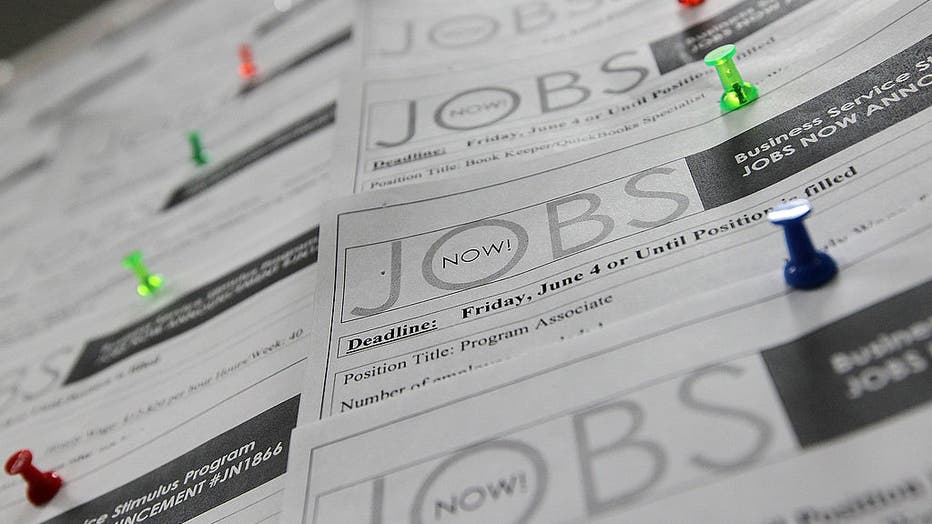 SAN FRANCISCO - MAY 07: Job listings are posted on a bulletin board at the Career Link Center One Stop job center May 7, 2010 in San Francisco, California. A report by the U.S. Labor Deprartment showed a surge in new jobs for the month of April addin

Despite the gains, businesses have reported difficulty finding enough people to work. About 2 million people are still getting unemployment benefits in California, which include an extra $300-per-week because of the pandemic. That extra benefit doesn’t expire until September.

"If it weren’t for the labor shortage that we are experiencing, the employment gain in California would have been much higher," said Sung Won Sohn, a professor of finance and economics at Loyola Marymount University.

Nationwide, California has accounted for 23% of all job growth since February, according to Dee Dee Myers, director of the Governor’s Office of Business and Economic Development. Democratic Gov. Gavin Newsom, who will likely face a recall election this fall, has proposed billions of dollars in additional aid for businesses and tax rebates for residents as part of the state’s new operating budget set to take effect in July.

"We’ve regained more than half the jobs we lost over the past year. But there’s still a long way to go," Newsom said.

The monthly employment numbers are somewhat jarring given the state’s history of job growth. Before the pandemic, it would have been exceptional to add 20,000 new jobs in one month. Now, California is routinely adding more than 100,000 jobs as coronavirus restrictions end.

"It’s unprecedented. We haven’t had these types of swings over the past 50 years," said Michael Bernick, a former director of the California Employment Development Department and an attorney with the Duane Morris law firm.

Those gains are possible because of the state’s unprecedented job losses during the pandemic. While the bulk of those losses happened over two months, it could take another year or two before the state eclipses its pre-pandemic employment levels.

California’s labor force — the number of people who have jobs or are looking for them — increased by about 12,400 people in May, to 18.9 million. That’s still below the pre-pandemic high of 19.5 million people.

On Thursday, state officials announced they would no longer give unemployment benefits to people who are not actively looking for work, starting on July 11. California had suspended that requirement during the pandemic.

The May jobs report is based on a survey from the week of May 12. Back then, California still was imposing capacity limits on businesses depending on how widespread the virus was in their area. Newsom ended those rules Tuesday, allowing businesses to open at maximum capacity.

It could take a few months before the impact of that decision shows up in the state’s jobs report.