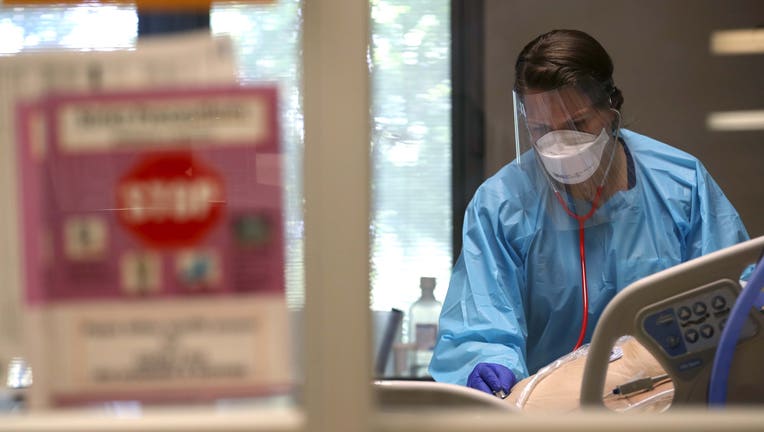 A nurse evaluates a coronavirus COVID-19 patient in the intensive care unit at Regional Medical Center on May 21, 2020 in San Jose, California. (Photo by Justin Sullivan/Getty Images)

OAKLAND, Calif. - California set a new record for most confirmed cases of coronavirus in a single day by recording 11,142 cases on Tuesday, according to state data.

That brings the state's total to 347,634 positive cases. In the Bay Area, Alameda and Santa Clara have witnessed the highest number of cases with 8,838 and 6,686, respectively.

An apparent record of 11,694 confirmed cases reported July 7 is considered inflated because of delays stemming from the July 4 holiday, Gov. Newsom has said.

There were also 140 deaths Tuesday, increasing the count to 7,227 lives lost since the outbreak began. Among Bay Area counties, Santa Clara has had 170 deaths while Alameda reported 152, the most in the region.

The number of patients in hospitals and in intensive care units are climbing too. The state data says there were 6,786 positive patients and 1,907 in an ICU on Tuesday.

Across the state, 31 counties on the state monitoring list have been ordered to shut down additional indoor operations, such as gyms and salons, beyond the statewide closure of indoor dining and bars.