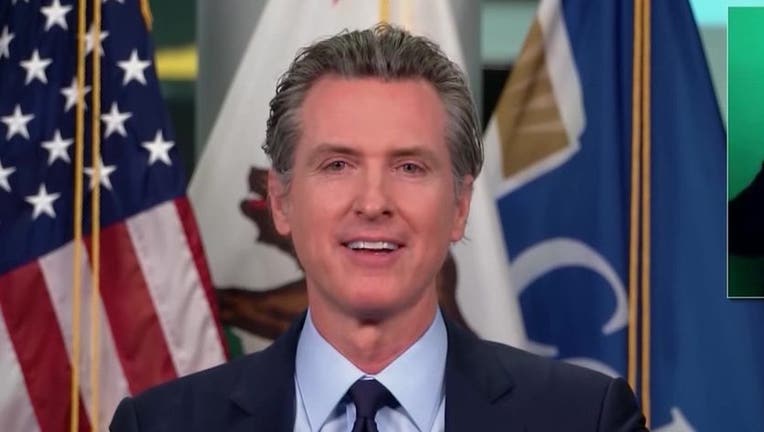 SACRAMENTO, Calif. - California Gov. Gavin Newsom is set to give perhaps the most important speech of his political life Tuesday, and he’s spent weeks laying the groundwork for an upbeat address aimed at nearly 40 million people exhausted by a year of coronavirus restrictions.

Newsom’s popularity has fallen significantly after reaching record highs at the start of the pandemic and he’s likely to face a recall election later this year driven by critics of his stewardship during the crisis. That makes Tuesday’s State of the State a critical step for keeping voters on his side.

Dr. Mindy Romero, founder and director of the Center for Inclusive Democracy at the University of Southern California, said the speech is an opportunity and a test. Newsom needs to assert his focus on vaccination equity, reassure the general population that California is on the right track and back up his claims that his pandemic restrictions were the right choice.

And the often wonky-sounding governor must speak plainly, Romero said.

"He has to really make the case that he has positively changed the tide in California, that he really has protected Californians," she said.

The speech traditionally is delivered in the Capitol to a joint session of the Legislature. This time, Newsom will speak from Dodger Stadium, which has served as a mass testing and vaccination center.

It comes a year after Newsom enacted the nation’s first statewide stay-at-home order. California fared relatively well for many months but by the end of the year was in the throes of the worst surge and virus deaths skyrocketed to more than 54,000, the most in the country.

The anti-Newsom effort is driven by Republicans hoping to regain a political foothold in California by tapping into widespread frustration over business restrictions and school closures. Organizers say they have more than the 1.5 million signatures needed to force an election, likely late in the year.

The State of the State usually is delivered on a February morning and attracts a limited public audience. Waiting until March gives Newsom the benefit of much improved virus conditions and by delivering it in the evening from the largest media market in the state he will draw far more public attention.

He also will benefit from the state’s weekly update of its reopening map that will come hours before the speech. Health officials are expected to announce another dozen counties — most of them less populated — will have restrictions eased.

Vaccinations also are increasing. California has administered more than 10 million doses, and for nearly a month Newsom has been on a tour of sites around the state to highlight that California has established an enormous capacity that will allow far more inoculations as federal shipments increase.

On Monday he was in the Central Valley for the fifth time in recent weeks, showing off progress and pledging attention to an area hard hit by the virus and one of the few that’s still represented in Washington by Republicans, including GOP House leader Kevin McCarthy.

Newsom is coming off a strong week that saw him outline a speedier reopening plan tied to vaccinating 2 million of California’s most vulnerable residents, sign a law aimed at getting the youngest kids back in classrooms by April 1 and announce that outdoor sports stadiums, theme parks and concert venues can reopen with limited attendance next month.

"Sports is a rallying cry that is bipartisan," said Jaime Regalado, an emeritus professor of political science at California State University, Los Angeles.

"For an incumbent under the gun from seemingly so many different directions and so many forces, this is an opportune time to talk about what you’re doing right and how things are going in California," he said.

Newsom’s approval rating fell from 65% last spring to 54% last month, according to the Public Policy Institute of California. He took a major hit when it was revealed he went to the high-end French Laundry restaurant for a lobbyist’s birthday party as he was urging Californians to stay home. Photos from the event showed Newsom not wearing a mask and sitting close to other guests.

"He comes into this State of the State address really, I think, needing to show Californians that he’s in charge and he has a plan," said Mark Baldassare, PPIC’s president and chief executive officer.

Two Republicans running for governor — former San Diego Mayor Kevin Faulconer and businessman John Cox, have painted Newsom as an out-of-touch elitist and pointed to the French Laundry dinner and Newsom’s failure to get public schoolchildren back into classrooms while his own children received in-person instruction at a private school.

While he’s faced criticism throughout the pandemic from some Democratic lawmakers and local officials who felt he wasn’t including them in decision making, in recent weeks Democrats have lined up behind Newsom and offered regular praise for his leadership.

"Right-wing Republicans in CA are trying to recall Gavin Newsom for the crime of telling people to wear masks and for listening to scientists during COVID," he tweeted. "We must all unite to oppose the recall in California."

Romero said while it’s unlikely Newsom will actually be recalled, even facing an election could harm his political future and be a distraction for Democrats nationally.

"Nothing in California happens in a bubble. It damages a politician to face a recall election, period," Romero said.