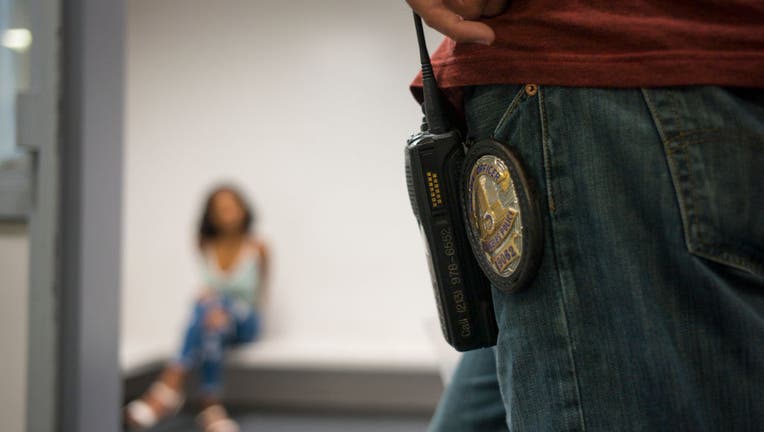 LOS ANGELES, CALIFORNIA - MAY 16: An officer of the Los Angeles Police Department's vice squad, right, monitors a 17-year old woman before she's transported to a state agency for minors following her arrest May 16, 2017 in the south east area of Los

LOS ANGELES - The California attorney general launched new anti-human trafficking teams to apprehend perpetrators and support survivors on Friday amid an alarming increase in labor and sexual exploitation statewide during the coronavirus pandemic.

The state’s lockdown exacerbated problems with human trafficking, officials said Friday, and made it much harder for victims to escape and find housing and other services.

Kay Buck, the chief executive officer for Los Angeles-based nonprofit Coalition to Abolish Slavery and Trafficking, called it "the most unforgettable and heart-wrenching year" as advocates saw a huge demand in services combined with a shortage of resources.

In LA alone, the nonprofit saw a spike of 185% in urgent human trafficking cases during the pandemic, Buck said. Advocates in LA County see victims — many who come from Mexico and the Philippines — who were duped into thinking they would have a job in the U.S. but are instead sold into "modern day slavery."

Bonta also urged Gov. Gavin Newsom to include in the final state budget another $30 million in new grants over the next three years for efforts to combat human trafficking. The funds would be in addition to $30 million in grants that are already in the budget spread over three years.

Newsom and legislative leaders are negotiating in private right now over what the final budget will look like. It must be passed by July 1.

Actors and activists Mira Sorvino and Alyssa Milano — as well as state Assemblyman Miguel Santiago and Angela Guanzon, who escaped her trafficker and aided law enforcement in their prosecution — joined Bonta on Friday to implore Newsom and lawmakers to approve the additional funds.