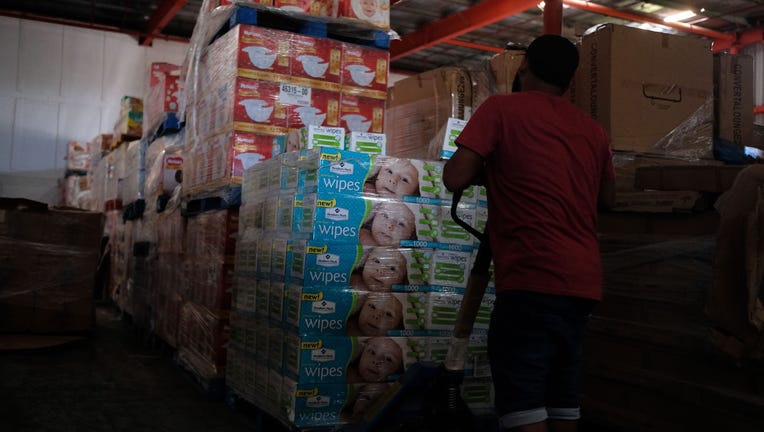 A man removes diapers and baby wipes from a warehouse filled with supplies, believed to have been from when Hurricane Maria struck the island in 2017, in Ponce, Puerto Rico on Jan. 18, 2020. (Photo by RICARDO ARDUENGO/AFP via Getty Images)

SACRAMENTO, Calif. - Wet wipes, those single-use wet tissues for babies and adults wanting something more than just toilet paper, are the scourge of sewer systems nationwide, according to several cities challenging claims that the products are safe to flush.

Legislation in California that advanced on Thursday would require products that cannot be flushed down the toilet to be clearly labeled as such. Cities including New York and the District of Columbia have also attempted to cut down on what manufactures call “flushable wipes,” saying they can actually clog pipes and require costly repairs.

Some environmentalists worry the wipes end up in waterways, and the bill is among a number of efforts in California to keep harmful products out of the waste stream. A bill to replace California's faltering recycling program by requiring beverage distributors to buy back their bottles and cans also moved forward in the California Senate on Thursday. Activists and celebrities lobbied in Sacramento on Wednesday for a proposal to cut statewide waste from single use plastics by 75% within the decade.

The California Assembly bill on wet wipes was watered down Thursday amid industry resistance, but only to bring opponents to the table, the bill’s author said.

Critics say the group's standards are not peer-reviewed, and producers of flushable wipes dispute that their items block sewers.

Amendments to the bill removed references to “toilet wipes” and an extensive list of criteria for determining whether a product can be advertised as flushable. The changes were made amid continuing talks with companies who oppose the measures, said the office of the bill’s author, Democratic Assemblyman Richard Bloom of Santa Monica.

“We removed most of the language to accommodate the opposition and bring them to the negotiating table,” Andrew Aldama, a legislative staffer for Bloom, wrote in an email. “The assemblymember is hopeful we will add amendments in the coming months that will turn the bill into something that will be effective.”