The Bootleg Fire in southern Oregon grew to almost 202,000 acres (about 315 square miles) by July 13, making it the largest in the US, officials reported. (Credit: NOAA via Storyful)

BLY, Ore. - Satellite video from space captured billowing smoke from the Bootleg Fire in southern Oregon, which is currently the largest wildfire burning in the United States.

The timelapse footage captured July 12 by the National Oceanic and Atmospheric Administration shows the distance smoke from the fast-moving wildfire has reached. The fire had burned more than 202,000 acres of land as of Tuesday morning, according to Inciweb, an interagency incident information management system.

Fueled by hot and dry conditions, the fire exploded from nearly 77,000 acres on Saturday to its current size. Some 1,189 personnel were involved in fighting the blaze, fire officials said. 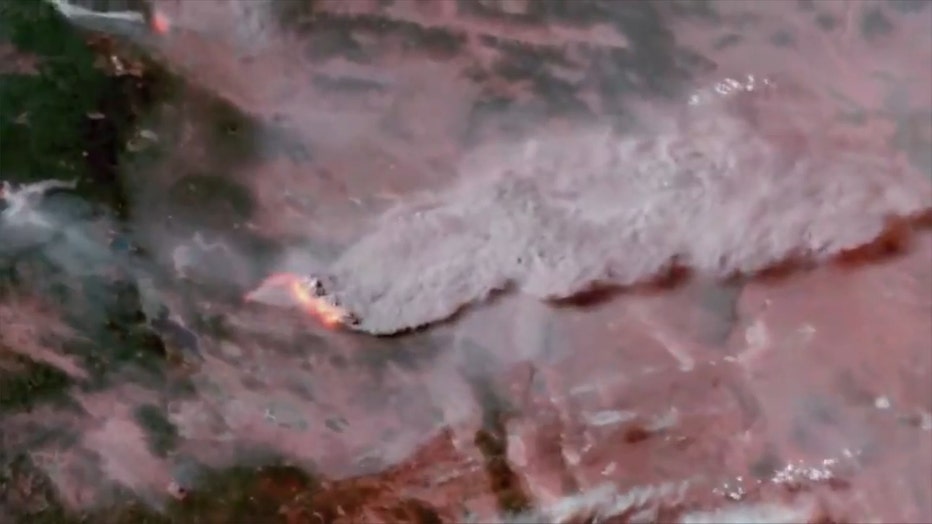 RELATED: Number of US wildfires so far in 2021 largest in a decade, fire center data says

Huge swaths of the Fremont-Winema National Forest in southern Oregon were incinerated as firefighters received a warning about conditions from incident commander Al Lawson.

"As you go out there today — adjust your reality," Lawson said. "We have not seen a fire move like this, in these conditions, this early in the year. Expect the fire to do things that you have not seen before."

The week-old Bootleg Fire threatened about 2,000 homes and destroyed more than 20 others, along with other minor structures. The fire’s movement prompted authorities to place additional areas under evacuation notice and expand the number of acres ordered closed on an emergency basis inside Fremont-Winema.

Scientists say climate change has made the West much warmer and drier, and they warn that weather will get wilder as the world warms. They say extreme conditions are often from a combination of unusually random, short-term and natural weather patterns heightened by long-term, human-caused climate change.

Firefighters have had some success with keeping the Bootleg Fire out of several small communities but so far the fire is 0% contained, according to the National Interagency Fire Center.

Meanwhile, the number of wildfires that have burned in 2021 so far has reached the highest number in a decade, according to NIFC.

Currently, 67 large fires have burned through 917,954 acres across the U.S. and only three have been contained, according to the NIFC.

The states that have the largest number of fires burning this week are Arizona and Idaho, with 13 fires each and Montana with 12.

A high-pressure system that created the intense weather was weakening, but temperatures were forecast to remain above normal as large blazes continue burning in the West and Alaska.

More than 14,000 firefighters and support personnel were attacking fires covering close to a million acres (1,562 square miles, 4,047 square kilometers) of land, according to the NIFC.