In a speech before the United Nations, President Joe Biden gave a forceful condemnation of Russia's "brutal" war in Ukraine.

NEW YORK - President Joe Biden declared at the United Nations Wednesday that Russia has "shamelessly violated the core tenets" of the U.N with its "brutal, needless war" in Ukraine. He said the war is an affront to the heart of what the international body stands for as he looked to rally allies to stand firm in backing the Ukrainian resistance.

Delivering a forceful condemnation of Russia's seven-month invasion, Biden said reports of Russian abuses against civilians in Ukraine "should make your blood run cold." And he said President Vladimir Putin’s new nuclear threats against Europe showed "reckless disregard" for Russia's responsibilities as a signer of the Treaty on the Non-Proliferation of Nuclear Weapons.

He criticized Russia for scheduling "sham referenda" this week in territory it has forcibly seized in Ukraine.

"A permanent member of the U..N Security Council invaded its neighbor, attempted to erase a sovereign state from the map. Russia has shamelessly violated the core tenets of the U.N. charter," he told his U.N. audience.

Biden called on all nations, whether democracies or autocracies, to speak out against Russia's invasion and to bolster's Ukraine effort to defend itself.

"We will stand in solidarity against Russia’s aggression, period," Biden said. 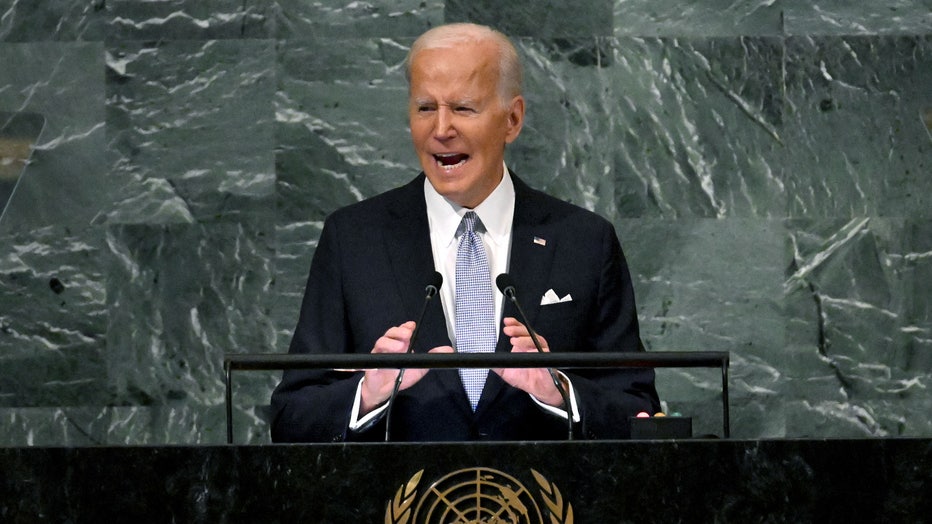 US President Joe Biden addresses the 77th session of the United Nations General Assembly at the UN headquarters in New York City on September 21, 2022. (Photo by TIMOTHY A. CLARY/AFP via Getty Images)

Biden also highlighted consequences of the invasion for the world's food supply, pledging $2.9 billion in global food security aid to address shortages caused by the war and the effects of climate change. He praised a U.N.-brokered effort to create a corridor for Ukrainian grain to be exported by sea, and called on the agreement to be continued despite the ongoing conflict.

Biden, during his time at the U.N. General Assembly, also planned to meet Wednesday with new British Prime Minister Liz Truss and press allies to meet an $18 billion target to replenish the Global Fund to Fight AIDS, tuberculosis and malaria.

But the heart of the president's visit to the U.N. this year was his full-throated censure of Russia as its war nears the seven-month mark.

The address came as Russian-controlled regions of eastern and southern Ukraine have announced plans to hold Kremllin-backed referendums in days ahead on becoming part of Russia and as Moscow is losing ground in the invasion. Russian President Putin on Wednesday announced a partial mobilization to call up 300,000 reservists and accused the West of engaging in "nuclear blackmail." 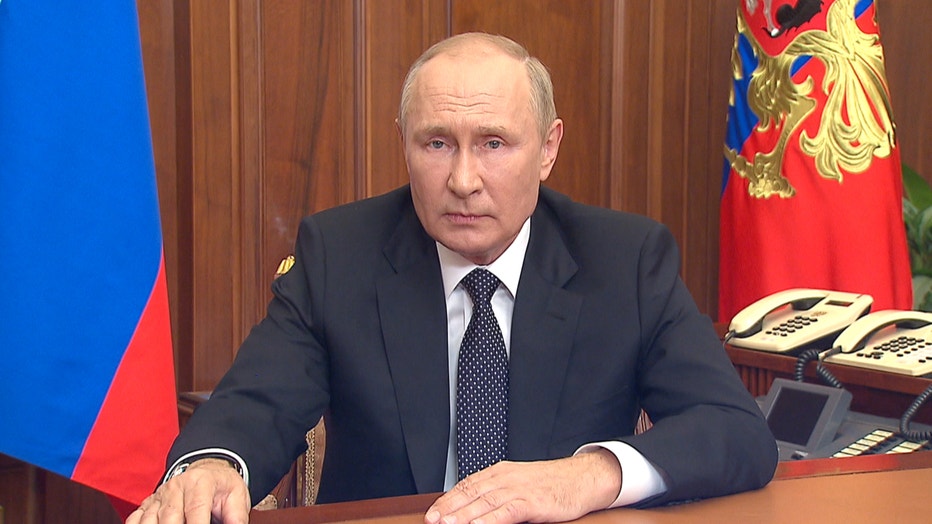 The White House said the global food security funding includes $2 billion in direct humanitarian assistance through the United States Agency for International Development. The balance of the money will go to global development projects meant to boost the efficiency and resilience of the global food supply.

"This new announcement of $2.9 billion will save lives through emergency interventions and invest in medium- to long-term food security assistance in order to protect the world’s most vulnerable populations from the escalating global food security crisis," the White House said.

Biden was confronting no shortage of difficult issues as leaders gather this year. 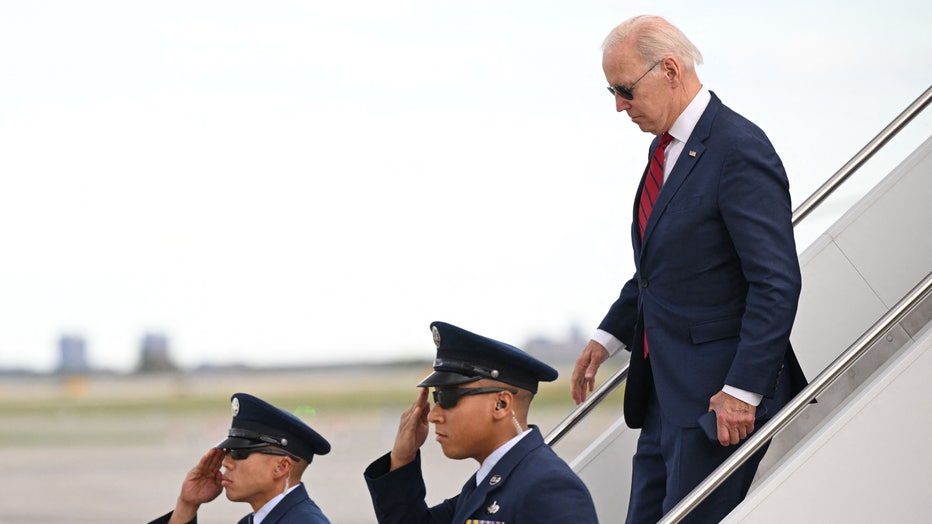 In addition to the Russian war in Ukraine, European fears that a recession could be just around the corner are heightened. Administration concerns grow by the day that time is running short to revive the Iran nuclear deal and over China's saber-rattling on Taiwan.

But one year later, global dynamics have dramatically changed.

Stewart Patrick, senior fellow and director of the Global Order and Institutions Program at the Washington think tank Carnegie Endowment for International Peace, wrote in an analysis that Biden’s task this year is "immense" compared to his first address to the U.N. as president.

Beyond diplomacy, the president is also doing some politicking. This year's gathering comes less than seven weeks before pivotal midterm elections in the United States. Shortly after arriving in Manhattan on Tuesday night, Biden spoke at a Democratic National Committee fundraiser for about 100 participants that raised nearly $2 million, and he's set to hold another fundraiser on Thursday before heading back to Washington.

His Wednesday address comes on the heels of Ukrainian forces retaking control of large stretches of territory near Kharkiv. But even as Ukrainian forces have racked up battlefield wins, much of Europe is feeling painful blowback from economic sanctions levied against Russia. A vast reduction in Russian oil and gas has led to a sharp jump in energy prices, skyrocketing inflation and growing risk of Europe slipping into a recession.

Biden's visit to the U.N. also comes as his administration's efforts to revive the 2015 Iran nuclear deal appears stalled.

The deal brokered by the Obama administration — and scrapped by Trump in 2018 — provided billions of dollars in sanctions relief in exchange for Iran’s agreement to dismantle much of its nuclear program and open its facilities to extensive international inspection.

Sullivan said no breakthrough with Iran is expected during the General Assembly but Biden would make clear in his speech that a deal can still be done "if Iran is prepared to be serious about its obligations." He added that administration officials would be consulting with fellow signatories of the 2015 deal on the sidelines of this week's meetings.

This year's U.N. gathering is back to being a full-scale, in-person event after two years of curtailed activity due to the pandemic. In 2020, the in-person gathering was canceled and leaders instead delivered prerecorded speeches; last year was a mix of in-person and prerecorded speeches. Biden and first lady Jill Biden were set to host a leaders' reception on Wednesday evening. 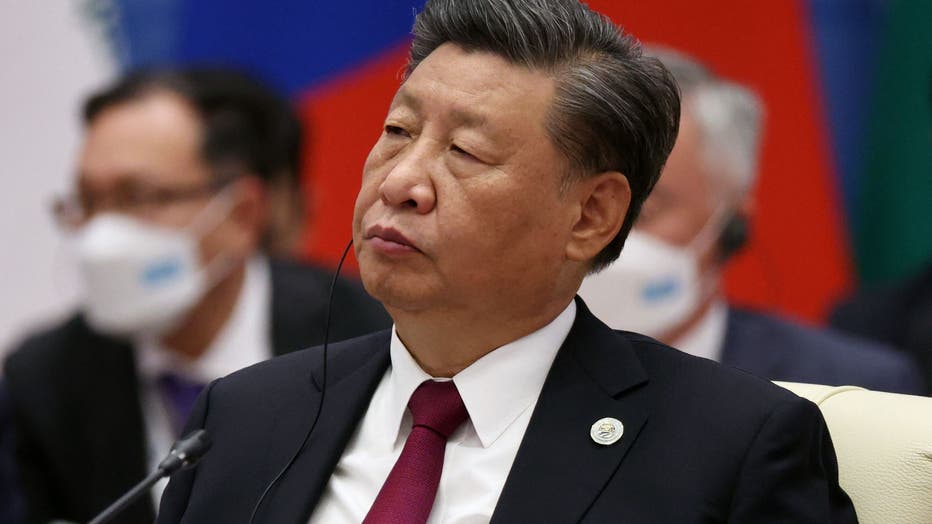 China's President Xi Jinping opted not to attend this year's U.N. gathering, but his country's conduct and intentions will loom large during the leaders' talks.

READ MORE: Biden receives criticism from China after saying US would defend Taiwan against invasion

Last month, the U.N. human rights office raised concerns about possible "crimes against humanity" in China's western region against Uyghurs and other largely Muslim ethnic groups. Beijing has vowed to suspend cooperation with the office and blasted what it described as a Western plot to undermine China’s rise.

Meanwhile, China’s government on Monday said Biden’s statement in a CBS "60 Minutes" interview that American forces would defend Taiwan if Beijing tried to invade the self-ruled island was a violation of U.S. commitments on the matter, but it gave no indication of possible retaliation.

The White House said after the interview that there has been no change in U.S. policy on Taiwan, which China claims as its own. That policy says Washington wants to see Taiwan’s status resolved peacefully but doesn’t say whether U.S. forces might be sent in response to a Chinese attack.