President Biden delivered his own address following Zelenskyy’s speech to Congress, in which he announced an additional $800 million in security assistance to Ukraine.

Biden, who has resisted Zelenskyy's requests to send warplanes to Ukraine fearing escalating the war with Russia, announced an additional $800 million in security assistance to Ukraine.

The additional $800 million brings the total announced in the last week alone to $1 billion, and a total of $2 billion since Biden took office more than a year ago.

Biden said Wednesday the aid includes the direct transfers of equipment from the Department of Defense to the Ukrainian military to help the continued fight against the Russian invasion.

"We’re going to give Ukraine the arms to fight and defend themselves through all the difficult days ahead," Biden said.

Congress has already approved $13.6 billion in military and humanitarian aid for Ukraine, and the newly announced security aid will come from that allotment, which is part of a broader bill that Biden signed into law Tuesday. 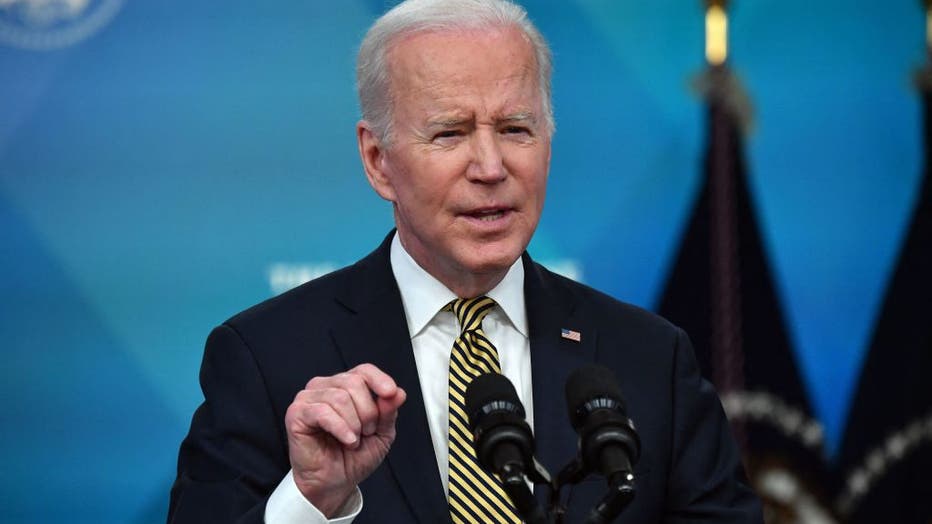 US President Joe Biden speaks about funds to aid Ukraine, in the South Court Auditorium of the Eisenhower Executive Office Building, next to the White House, in Washington, DC, on March 16, 2022. (Photo by Nicholas Kamm / AFP) (Photo by NICHOLAS KAMM

Biden also doubled down on the U.S.‘s sanctions on Russia, which include financial attacks. The sanctions are a substitute for direct military action against Russia by the U.S. and its allies. Biden has repeatedly said there will be no U.S. troops on the ground, even as weapons and materiel are provided to Ukraine.

"We’re crippling Putin’s economy with punishing sanctions that’s only going to grow more painful over time with the entire NATO and EU behind us, and many other countries," Biden said.

RELATED: Ukraine's Zelenskyy cites Pearl Harbor, 9/11 in appeal to US Congress for help against Russia

Nearing the three-week mark in an ever-escalating war, Zelenskyy has been imploring allied leaders to stop the Russian airstrikes.

Zelenskyy addressed the U.S. Congress earlier Wednesday, asking for sanctions against Russian lawmakers, imports to be blocked and a no-fly zone over his country.

Full address: Zelenskyy calls on US Congress for more help -- 'Close the sky'

Ukrainian President Volodymyr Zelenskyy spoke with the U.S. Congress from Kyiv where his country continues to wage war with Russian forces in what officials call an unprovoked attack by President Vladimir Putin. Zelenskyy implored members of Congress to help institute a no-fly zone and continue to enforce additional sanctions until the Russian military stops its assault. After playing a video showing some of the damage in Ukraine, Zelenskyy spoke in English to reiterate how important his request was.

"We need you right now," Zelenskyy said, adding, "I call on you to do more." In urging a steeper economic hit to the Russians, he said: "Peace is more important than income."

Lawmakers gave him a standing ovation, before and after his short remarks, which Zelenskyy began in Ukrainian through an interpreter but then switched to English in a heartfelt appeal to help end the bloodshed.

"The world is united in our support for Ukraine and our determination to make Putin pay a very heavy price," Biden said.