Afghan president addresses nation as Taliban marches across the country

Afghan President Ashraf Ghani said that remobilizing the Afghan National Defense and Security Forces was his "top priority" as Taliban forces continued their offensive across the country. (Credit: Office of the President of Afghanistan via Storyful)

WASHINGTON - The United States will be deploying 5,000 troops to Afghanistan to ensure an "orderly and safe" drawdown.

The U.S. began withdrawing troops earlier this year with plans to be out of the country by Sept 11. In recent weeks, Taliban forces have been marching across the country seizing major cities.

Just days ago, the U.S. committed 3,000 troops to the American Embassy in Kabul to help evacuate personnel like civilians and the Afghans who worked with the U.S. government. With commercial flights out of the country booked solid, the U.S. embassy notified Americans in Afghanistan of repatriation assistance for U.S. citizens looking to leave the country, FOX News reported.

The aid is available for U.S. citizens and their spouses and children, the parents of minors who are citizens and, pending availability, lawful permanent residents.

As Taliban forces seized more major cities Saturday on their path to Kabul, Biden bumped the American troop presence up to 5,000.

"First, based on the recommendations of our diplomatic, military, and intelligence teams, I have authorized the deployment of approximately 5,000 US troops to make sure we can have an orderly and safe drawdown of US personnel and other allied personnel and an orderly and safe evacuation of Afghans who helped our troops during our mission and those at special risk from the Taliban advance," Biden said in a statement.

The 82nd Airborne Division's alert brigade will send 1,000 paratroopers to Kabul next week to reach the White House's goal of 5,000 troops in the city to protect the evacuation of U.S. personnel, Fox News' Lucas Tomlinson reported.

Defense officials said there were already 1,000 troops on the ground. Another 3,000 Marines and soldiers will be there by the end of the week.

Biden blamed former President Donald Trump for the resurgence of the Taliban, claiming to have inherited a deal "that left the Taliban in the strongest position militarily since 2001." 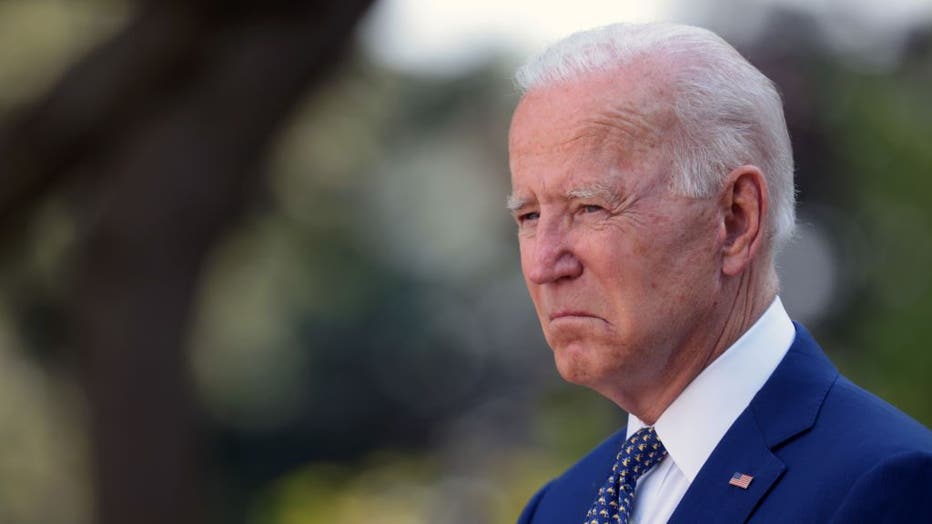 President Joe Biden attends a ceremony where he signed a bill honoring law enforcement, in the Rose Garden of the White House on Aug. 5, 2021, in Washington, DC. (Photo by Win McNamee/Getty Images)

The Trump administration had committed to withdrawing American forces from Afghanistan by May 1, a deadline Biden did not meet.

"I faced a choice—follow through on the deal, with a brief extension to get our forces and our allies’ forces out safely, or ramp up our presence and send more American troops to fight once again in another country’s civil conflict," he said.