A business owner was ordered by the City of Lawndale to take down their mural honoring Kobe and Gianna Bryant. She says the city threatened to issue a fine and then pull their business license if the mural wasn't taken down immediately.

LAWNDALE, Calif. - Wearing a No. 24 Los Angeles Lakers jersey, a local artist is being forced to paint over her own work.

"This is very hard to do right now," Kay Luz said. "It's kind of making me really emotional, to be honest."

Over the weekend, Luz started painting a mural honoring Kobe Bryant and his daughter Gianna outside Xclusive Barbershop in Lawndale.

"Kay came to my pops and told him she wanted to do a mural for Kobe's anniversary," said Eric Lopez, whose dad owns Xclusive Barbershop. "I mean, we all grew up watching Kobe play. He inspired us all."

With their blessing, Luz began her work of art.

"I wanted to pay my respects to Kobe and his family," Luz said.

But before she could complete the mural, the City of Lawndale put a quick stop to it. 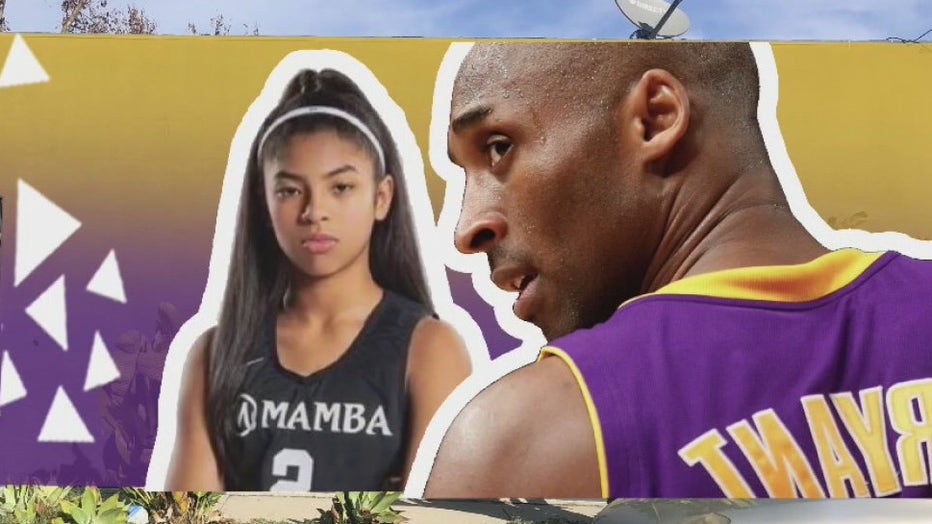 "One of the representatives from the city came over and said we have to take it down because murals aren't allowed in the City of Lawndale," Luz recalled.

Lopez said the city threatened to fine his dad and pull his business license if the mural wasn't removed immediately.

"We pretty much have to follow the rules or face the consequences," Lopez said.

Lopez told FOX 11 he found the timing of all this odd, considering Tuesday marks exactly one year after the helicopter crash that killed Bryant, his daughter "Gigi" and seven others.

"It's really ironic that they came to us on his anniversary…of when he passed away," Lopez said.

"I just assumed since it wasn't anything offensive and I had permission from the owner himself," Luz said. "That it was going to be OK."

Hours after FOX 11 shared Lopez and Luz's stories, Lawndale Mayor Robert Pullen-Miles told Gina Silva he wishes the city handled the incident differently. He said it should have stayed a little longer.

"At least during the period of time, in which we are celebrating Kobe's life and his legacy and his daughter's life," Pullen-Miles told FOX 11 Wednesday.

The Mayor of Lawndale is not happy with the way the city employees handled the mural painted over a barbershop honoring Kobe and Gianna Bryant.

Pullen-Miles says he is working with his colleagues to see if the city can make "some type of provisions" that can allow the Luz to bring back her work.

"Definitely something we are going to move speedily on," he added. "We're going to work. Work through it."

Luz told FOX 11 on Wednesday she is considering coming back to the wall.

"It's good to know there is some type of support coming from the mayor himself," Luz said.