MUSCOY, Calif. (FOX 11) - Authorities are warning the public about an armed and dangerous suspect wanted for murder in San Bernardino County.

Miguel Triana-Morales, 36, is wanted in connection with the Aug. 8 murder of Pomona resident, Norberto Mendoza, 31.

The sheriff's department said that on the day of the murder, deputies responded to the 2300 block of Darby Street in Muscoy after reports of shots fired. Deputies arrived and found Mendoza unresponsive in the driveway, suffering from gunshot wounds. He was transported to the hospital where he was pronounced deceased about an hour later.

Neighbors told detectives they heard the victim and suspect arguing and then shots fired.

Following the shooting, homicide detectives received information that the suspect, Triana-Morales, fled the scene in his black 2012 Jeep Wrangler Sport and may have traveled into Mexico.

Authorities said Triana-Morales has ties to California and Minnesota and is known to drive across the country frequently. He is considered armed and dangerous and detectives have obtained an arrest warrant for murder.

Detectives also released a photo, taken prior to the murder, of Triana-Morales standing near his Jeep Wrangler holding the handgun reportedly used in the murder, and a rifle. The rifle was recovered at the scene; the handgun has not been recovered. 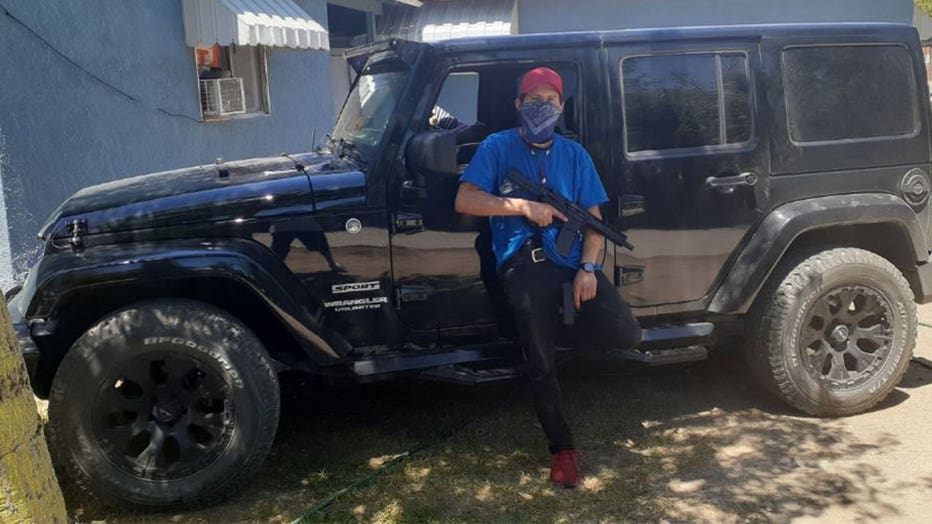 Anyone with information regarding the whereabouts of Miguel Triana-Morales was asked to contact Detective Simon Demuri, Specialized Investigations Division – Homicide Detail at 909-387-3589.