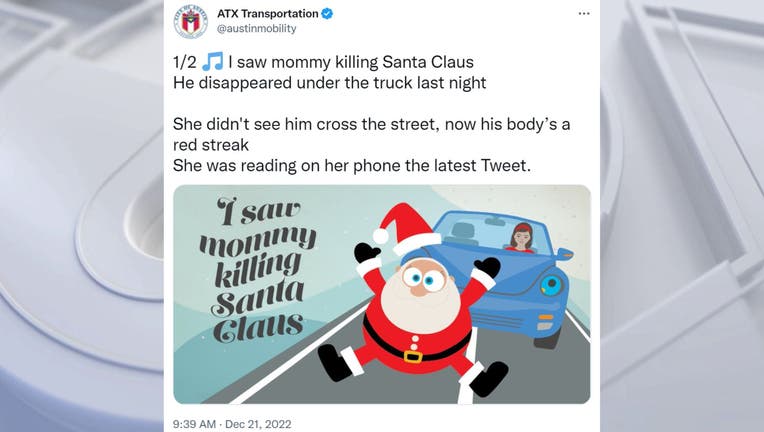 The Austin Transportation Department's tweet has drawn controversy due to the post's dark-natured take on the holidays.

The Austin Transportation Department turned to Twitter on Wednesday with a festive, yet dark message to not tweet, text, and drive this holiday season.

In the tweet posted to @austinmobility, ATX Transportation took on the spirit of Tommie Connor who wrote, "I Saw Mommy Kissing Santa Claus" in 1952.

"I saw mommy killing Santa Claus," the tweet read. "He disappeared under the truck last night[.] She didn’t see him cross the street, now his body’s a red streak[.] She was reading on her phone the latest tweet[.]"

"Then I saw EMS putting Santa Claus underneath a sheet of snowy white," the tweet continued. "Oh, what a sad day it has been [,] with distraction yet again[.] and mommy killing Santa Claus last night. Drive safe for the holidays and put distractions away before you drive."

Although the department may have thought the tweets were seasonally appropriate, some Twitter users responded differently.

Austin City Council Member Mackenzie Kelly tweeted she had heard concerns about the messaging from the transportation department, so she reached out to the city manager for more information.

Another user, MB, or @sugarcubedog2, said, "I think this is kind of extreme. I say that as someone who lost their grandmother to being [run] over when I was a kid, and then lost a friend at 17 to a [hit-and-run]. Think before you tweet."

While it may be difficult to hear Michael Jackson and the Jackson 5 sing Austin Transportation’s song, the messaging was clear to stay off the phone while behind the wheel.

In 2022, Austin had 617 vehicle accidents, of which 105 were fatal, according to the city’s Vision Zero statistics.

"Creating awareness and education around safety is only one part of the community’s Vision Zero goal to bring traffic deaths and serious injuries to zero," a spokesman for the City of Austin said on Wednesday. "The program leads with street improvements and also focuses on policy and enforcement. APD officers will be on patrol looking out for drunk drivers this holiday season with a No Refusal Initiative in effect through Jan. 1."

Today’s Christmas-themed safety tweets from the city are not the first. In fact, Austin also ran campaigns like, "Rudolph the Red Light Runner," and "Frothy the Snowman." Two more posts are planned for later this week, according to city officials.

"We hope the social media posts encourage the community to make good choices on the road this holiday season by planning a safe ride home and avoiding distractions," the city spokesman said. "In this series of posts, we are continuing to focus on the prime behaviors that cause severe crashes – speed, distraction, intoxication and failing to yield – and we hope the messaging will raise awareness in the community to travel safely this holiday season."

In a statement to Fox News, Council Member Kelly said she had heard from Austin Transportation Department Director Richard Mendoza. "He apologized to the city and provide assurance that the department will establish better controls over messaging going forward."