What has been a wet end to 2022 is going to get even soggier as another atmospheric river is drenching California through the weekend, bringing a renewed threat of flooding rains and heavy mountain snow.

Steady rains were already falling across the northern edge of the state Friday morning as the "firehose" of rainfall began to move ashore; its first stop on its eventual trek south through the entire state.

Flood Watches cover millions as they stretch across the northern and central California coastal area and inland valleys, including the Bay Area and Sacramento region. 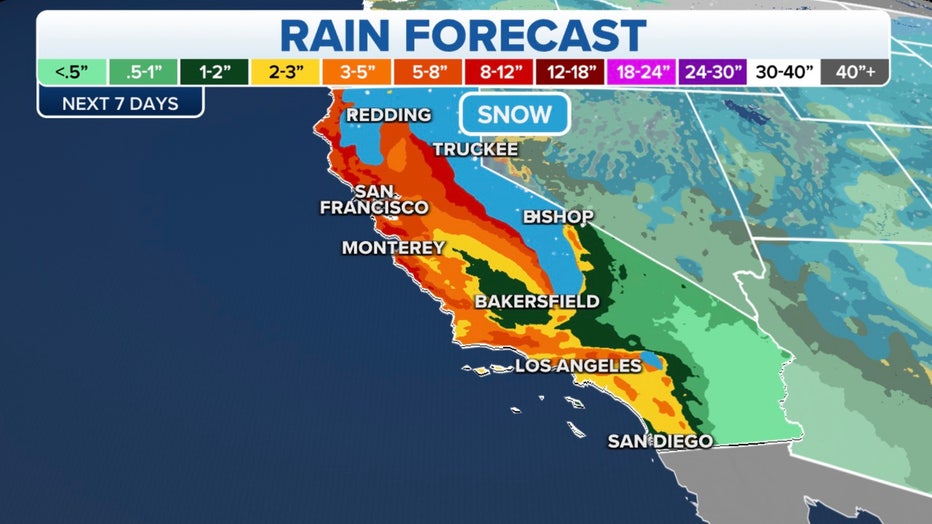 Northern California will continue to take the brunt of the moderate to heavy rain on Friday, with the atmospheric river focusing its wrath onto Central California and the Bay Area late Friday night into Saturday morning, according to the FOX Forecast Center.

Ponding of water on roadways, rises on small streams and creeks, and burn scar flooding will pose a hazard as rain continues to fall for nearly 36 hours straight.

Storm totals for Friday through Sunday are around 2-4 inches of rain in the coastal lowlands of southwestern Oregon into Northern and Central California, with higher amounts in the hills.

About 3-5 inches of rain are likely in the inland valleys, including Sacramento, by Saturday night, and about 1-2 inches of rain is likely in Southern California on Sunday. Even the arid areas of Arizona, such as Phoenix and Tucson, will net around a half-inch to an inch of rain from the storm. 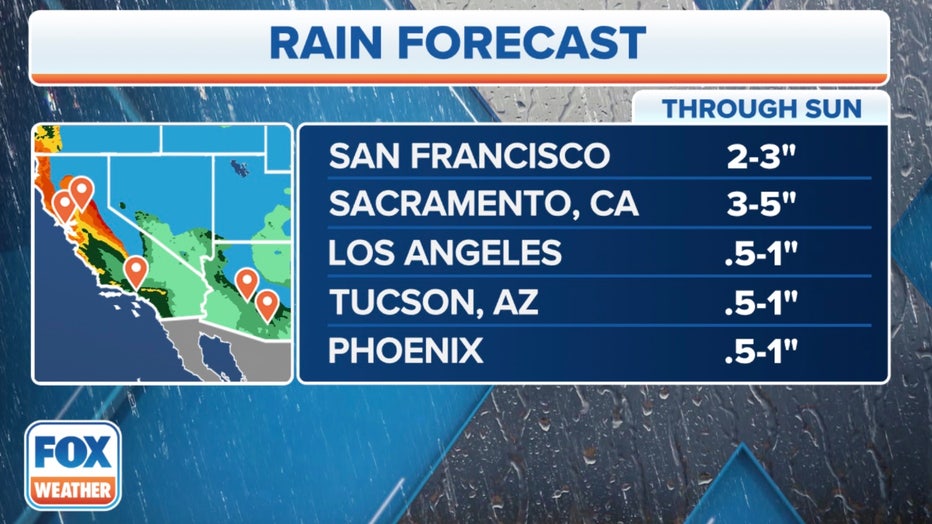 The storm will bring 2-5 feet of snow to the highest elevations of the Sierra Nevada, with about a foot of snow at the pass levels, bringing potential travel impacts.

But with snow levels starting as high as 7,000 to 8,500 feet, much of the mountains will receive several inches of rain instead, adding pressure to the region's rivers.  Flash flooding is another concern, especially in burn scar areas from recent wildfires.

The Influence of the atmospheric river in California will spread rain and snow into the Rockies through Sunday, according to the FOX Forecast Center.

Some travel impacts are likely, especially during morning and evening commutes. 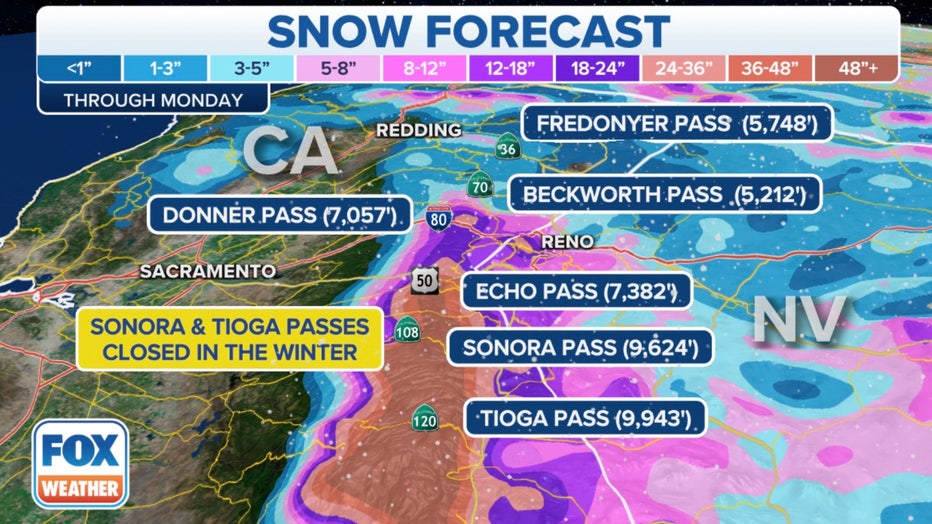 About 1-3 feet of snow is likely in the mountains, and Winter Storm Warnings have been issued in advance of this expected snow.

For Salt Lake City, it should stay as a mostly rain event with maybe an inch or two of snow toward the end of the weekend, but heavy snow is expected in the Wasatch Range.

In Denver, 3 to 5 inches of snow is likely, which may make for tricky commutes over the next few days. Already several spin-outs plagued the city's Thursday morning commute, according to FOX 31 Denver. 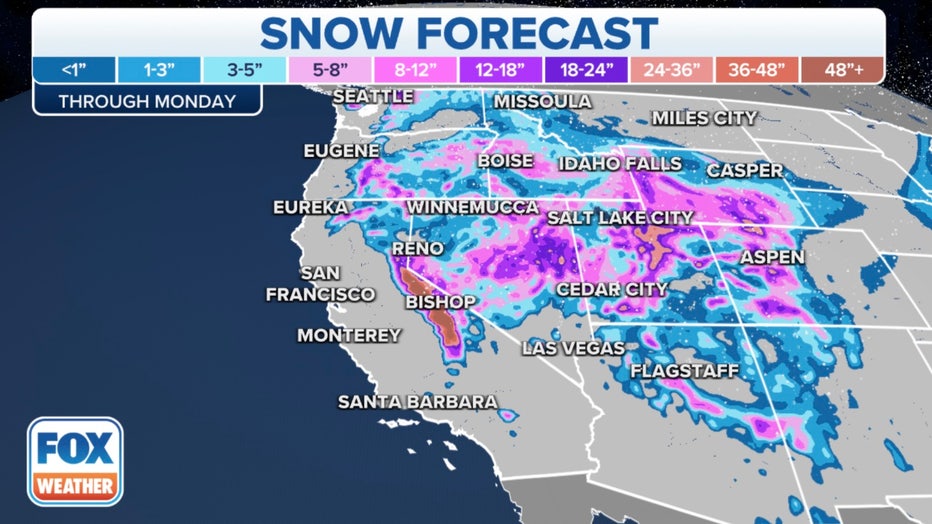 In addition to snow, avalanches will be possible across most mountain ranges heading into the weekend.

The calendar year may change on Saturday night, but the soggy weather pattern along the West remains the same.

Additional storms are set to roll through California next week -- about every 48 hours or so.

Long-range forecast charts suggest much of California could see 4-8 inches of total rainfall from the multiple storms through the end of next week.

Will the atmospheric river make a dent in California's drought?

Several inches of rain in the forecast this week on top of what's fallen already this winter is surely appreciated in a region that has been mired in a years-long drought.  But while every drop helps, the region has a long way to go.

"At this point in time, we still have another four or five months in our snow season and in our typical rainy season," said Andrew Schwartz, lead scientist at the Central Sierra Snow Lab. "That means that while we're kind of scoring the touchdown in the first quarter of the game. Right now, we still have three-quarters left, and there's a lot that can happen."

Schwartz said last year's winter season also started off well with a record-breaking December mountain snowfall. "But January through March kind of shut off, and we didn't see as much precipitation come through in that period as we would have wanted."

But even a normal snowfall season wouldn't be enough to get the region out of the drought.

"At this point in time, we realistically need about an extra winter's worth of precipitation," Schwartz said. "So it's not going to happen in one year. At minimum, we're probably looking at 3 to 4 of above-average before we can really talk about getting out of the drought."

In an average season, the lab sees 30 feet of snow. An extra season’s worth of snow would mean 60 feet in one year. That, he said, is a very "high task to try to take on.