LOS ANGELES - While reporting more than 60 new deaths and 3,000 additional cases, Los Angeles County health officials again pleaded with residents on Wednesday to take precautions against the spread of coronavirus, while also slamming the notion that COVID-19 is no more dangerous than flu.

County public health director Barbara Ferrer presented figures showing that during the recent flu season that ran from October to May, 1,521 people died of influenza in Los Angeles County. From January through June alone, 3,402 people died from the coronavirus.

"In the first six months of 2020, COVID-19 killed more than twice as many people as the flu did over an eight-month period," Ferrer said. "...Unlike the flu, there is no vaccine for COVID-19 at this time."

She also said the virus is on track to be the second-leading cause of the death in the county, behind only coronary heart disease.

Ferrer said she wanted to share the comparisons to counter"skepticism" that is commonly expressed "from people who are claiming that this virus is nothing to worry about. Unfortunately, it's just simply not true."

On a day that California reported a record number of cases statewide and overtook New York as the leader in infections, Los Angeles County reported 3,266 new cases, while Long Beach added 220 more and Pasadena reported 44, raising the countywide cumulative total from throughout the pandemic to165,134.

The county also logged another 64 deaths, although one of those fatalities was reported Tuesday by health officials in Long Beach. Long Beach added another fatality Wednesday, as did Pasadena.

The new deaths increased the county death toll to 4,215.

The county also reported that 2,207 people were hospitalized as of Wednesday with the virus, excluding Long Beach and Pasadena, which have their own health departments. It was the fourth day in a row the number has exceeded 2,200.

But while that number remains just shy of the record set days ago, health officials noted that the steady rise in hospitalizations seen earlier this month appears to have flattened out, and may actually be starting to decrease.

But they continued to warn that given the high number of people in the hospital, the number of deaths could rise in the coming days and weeks.

Nearly 1.6 million people have been tested for the virus throughout the pandemic, with roughly 10% testing positive, according to the county.

The rolling daily average of positive tests from the past seven days was 8.5%, down from peak levels about two weeks ago when the rolling average topped 11%.

The seven-day daily average of new cases reported by the county was at 2,952 as of Wednesday, a sharp increase from late June, when the average was 1,763.

"The seven-day average paints a clear picture about what's happened over the last few weeks, which is that here in L.A. County we continue to see a sharp increase in community transmission," Ferrer said.

She again continued to stress that younger residents are driving recent increases in infections. She noted that between mid-June and mid-July the number of people aged 17 and younger who have been hospitalized increased by 50%, while the 41-65 group saw a 33.5% jump and those 18-40 saw a 29.7% increase.

In terms of overall cases, the largest recent increases have occurred in people aged 18-29, followed by those aged 30-49 and 12-17.

"It's only through compliance with the order that requires physical distancing, infection control, the use of face coverings, heightened cleaning, that we can continue to make sure that businesses can stay open because this ultimately is what will help us get back to slowing the spread of COVID-19." 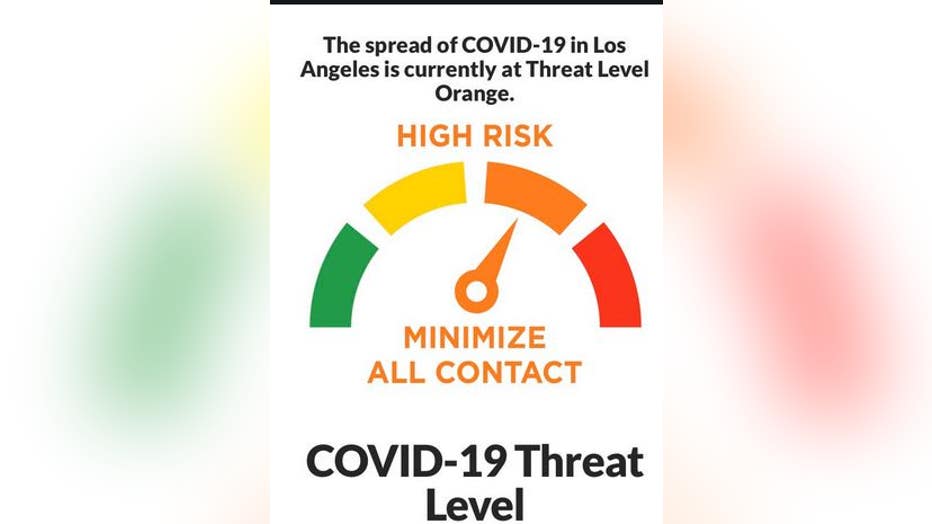 Health officials and Los Angeles Mayor Eric Garcetti have warned in recent days that continued increases in community spread of the virus and other key metrics could lead to a reimposition of tougher stay-at-home and business-closure orders.

Asked point-blank on Wednesday if the county planned to order such restrictions this week, Ferrer said no.

"We are not planning to shut down this week," she said, pointing the stabilization of some data, such as hospitalization rates.

She said the solution to defeating the virus is not remaining closed forever, but to combine reasonable health restrictions for businesses and ample precautions by residents.

"I hope that this week marks a turning point and that our considerate, kind behaviors and the actions we've taken in the past two weeks are going to translate into a healthier community that can resume its recovery journey," she said.

"Reopening all our schools and other sectors of the economy depends on us being able to do what we did before -- work together, all of us, so that we slow the spread by flattening the curve.

"I know its hard, I know it's a sacrifice, especially on beautiful summer days, but I'm asking people to stay home as much as possible,"   Ferrer said the state has authorized local health departments to grant waivers to school districts that want to offer in-person classes for pre-kindergarten through sixth-grade students, and the county is working to develop guidelines that would potentially allow such classes. But she said there would be strict protocols and waivers would only be granted in close consultation with the state.

Gov. Gavin Newsom has already ordered that school campuses remain closed in counties that are on the state's coronavirus monitoring list, including Los Angeles County.