Mariam Khaloyan who serves as the Congressional Relations Director for the Armenian Assembly has been on a fact-finding mission in Artsakh and Armenia. She is documenting the destruction and the aftermath of what happened during the war between Armenia and Azerbaijan.

Now,  more images are being released that show the destruction in the Armenian Republic of Artsakh.

"Arriving in Stepanakert, I immediately saw the damage that the shelling, the intensive shelling for 44 days took place in the city of Stepanakert, the capital," said Khaloyan.

The historic Armenian enclave inside Azerbaijan was invaded in late September when more than half the territory in Armenian control was taken over by Azerbaijan. Officials believe an estimated 4,000 Armenian soldiers and civilians lost their lives.

Khaloyan added that countless residential buildings have been damaged and destroyed.

"One of the biggest issues was the heating, as well as the damage to civilian and residential buildings. Many windows have been blown out. Those issues need to be addressed right away," she said.

In addition, the city’s main power station was destroyed.

"This did leave a significant impact as electricity is scarce in Stepanakert and so are other everyday needs, which the people of Artsakh need such as internet connectivity, electricity, heat and all of this comes from damage from the infrastructure," Khaloyan described.

Stepanakert’s central market was shelled heavily, leaving many shops without walls or roofs.

Thousands of people have returned home and they are eager to get back to whatever the new normal will be.

But the danger still looms.

The Halo Trust -- a U.K.-based charity that removes landmines -- said it doesn’t have enough time to clear the area of dangerous munitions from unexploded parts of cluster bombs.

"They can be found on roofs and attics. These unexploded, undetonated munitions are filled with small metal balls inside, which if detonated can explode and result in severe damage, if not permanent loss of limbs," Khaloyan explained.

On top of all of the issues in the nation, residents who had to hide in bunkers to survive got sick from COVID-19. Hunkering down in cold, dark basements turned into super spreader events.

"The central church in Stepanakert, the Holy Mother of God Cathedral at one point housed 120 people who sought refuge in the basement of the church.  It was horrible to see and hear that there were so many people who were sick and they couldn't do anything about it. They couldn't leave because of the constant alarm that was going off in the city and the constant shelling. So they had to all stay there together," said Khaloyan.

But perhaps the biggest and most urgent matter right now is the missing POW’s.

"What Mr. Beglaryan is saying is that the crimes that are committed and the human rights abuses are war crimes, and those need to be called out. As we've seen all the videos that are shared on social media. -- the desecrating of the church sites, the gravesites, desecrating Holy sites, cultural heritage sites, as well as committing human rights abuses towards those they have captured," said Khaloyan. 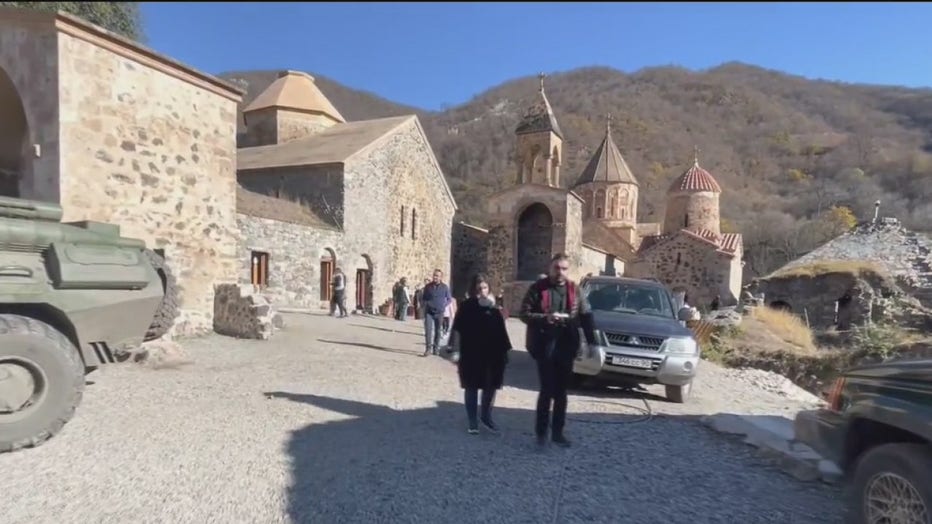 Khaloyan is set to return to Washington D.C. this week, as Congress is set to get back in session, where she will present her report.

Before Congress went into recess New Jersey Senator Bob Menendez-- who is the ranking member of the Senate Foreign Relations Committee--  took the Senate floor and demanded the U.S. sanction Turkey and Azerbaijan and urged for $100 million immediate aid to be sent to Armenia and Artsakh.