Russia-Ukraine: Humanitarian & medical relief provided to Ukraine through Save Our Allies

Save our Allies, a direct-response rescue organization, alongside partners NGOs, is continuing its mission to assist in evacuation efforts from war-torn Ukraine by providing humanitarian and medical relief. Save Our Allies is assisting with the coordination and delivery of medical relief to Ukranians wounded and injured during Russia’s unprovoked invasion of the country. As an agile and nimble organization, Save Our Allies is able to move to where care is needed and provide safe haven to those who are vulnerable.

The American public has shown overwhelming support for Ukraine as Russia wages war, and some U.S. citizens are ready to ship off to join the battle.

"We’re going to go out there, and we’re going to straighten it out," he said. "There’s a lot of similarities between what we did in Iraq and Ukraine."

Ukraine’s President Volodymyr Zelenskyy released a plea last month, offering up citizenship to foreign fighters who are willing to defend Ukraine from Russian attacks. According to Ukraine, 16,000 people from around the world have already volunteered. 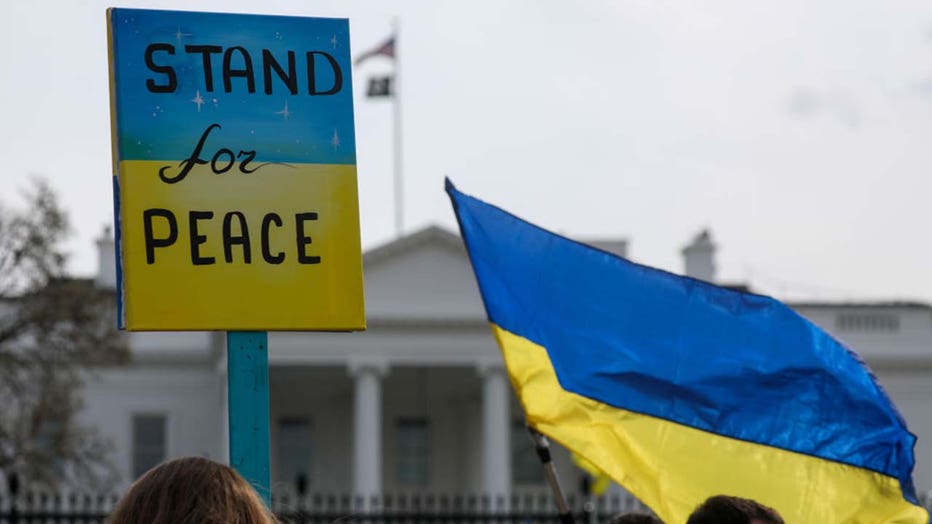 FILE - People gather around the Lafayette Park in front of the White House in Washington, USA to stage a protest against Russia's attacks on Ukraine, on March 6, 2022.

Bayonne, New Jersey union carpenter Andrew Bennett has no combat experience, but expressed his willingness to help in any way possible.

Some Americans, like former military contractor Sean McFate, shared concerns about the dangers of sending Americans into Ukraine, potentially pulling the U.S. into an unwanted conflict.

"What happens if they get captured or killed by the Russians?" he questioned. "That will hand Putin an immense propaganda tool."

But Diaz disagreed with these objections, arguing that fighting for freedom should be America’s greatest occupation.