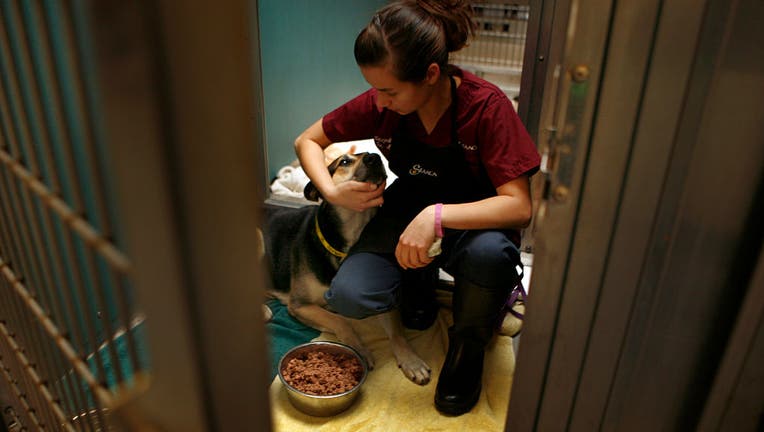 LOS ANGELES - Animal rescue groups are sending out urgent pleas for potential adopters for unwanted animals at the Southeast Area Animal Control Authority, where more than 50 animals are in danger of euthanasia due to overcrowding.

SEAACA was formed in 1975 to serve Downey, Norwalk and Pico Rivera, but has since expanded to encompass 14 cities that are not served by Los Angeles County Animal Care. Its shelter at 9777 Seaaca St. in Downey is frequently overcrowded with the burden of serving communities with a combined population of approximately 900,000 people.

On Wednesday, the shelter sent a notice to its rescue partners with a long list of animals on its "All Alert Report" who are "in need of a rapid exit strategy from SEAACA's Care Center." Those who have not secured a commitment by their mandatory pick-up deadlines are subject to euthanasia, with the various deadlines occurring this weekend and next week.

The list of endangered animals included 27 dogs, 14 cats and 15 rabbits.

The SEAACA shelter is open to the public from 1 to 3 p.m. Wednesday through Saturday for browsing, but also takes adoption holds and appointments by phone. Animals currently at the shelter can be viewed at www.seaaca.org/adoptions/view-our-animals. More information can be found at www.seaaca.org, or by calling 562-803-3301.

SEAACA is running a "Fall in Love" promotion through Nov. 30 offering a $15 adoption fee for cats and $30 for dogs who weigh 30 pounds or more.

With most of the attention generally paid to dogs and cats, rabbits are often overlooked, but they are also a sad and persistent presence at shelters.

Lejla Hadzimuratovic, founder and president of Bunny World Foundation, a Los Angeles-based nonprofit that's rescued thousands of unwanted rabbits from shelters and owner surrenders since 2008, was frantically trying to arrange for fosters or adopters for the 16 rabbits, but her group is already stretched thin caring for bunnies they normally rescue from the six shelters in the city of Los Angeles.

BWF was able to pull three of the 15 alerted rabbits from SEAACA, and Hadzimuratovic is asking interested parties to adopt directly from SEAACA or contact her to foster at info@bunnyworldfoundation.org.

"Bunny World Foundation is deeply saddened at witnessing the dire situation at SEAACA and struggling to assist with pulling each and every discarded rabbit on death row," Hadzimuratovic said. "The shelter claims that they do not have space to house so many animals and are reaching out to partners on daily basis to clear the shelter of dogs, cats, and rabbits. They do not have the resources to find out the gender of rabbits scheduled for euthanasia, let alone to spay/neuter them prior to sending them to partners."

She blames people who breed bunnies and those who fail to spay and neuter their pet rabbits for much of the overpopulation problem.

"When you buy a bunny, no matter where you buy that bunny from, you are supporting the breeders and the bunny mill owners. Please, never ever buy, always adopt; we promise you that whatever bunny you want, there is one waiting for you in a shelter or rescue today," she said. "If you have never adopted a bunny, then you have missed out on the most fantastic feeling, it's that feeling of saving a life. Ask anyone who has done it, and they will tell you the same, that bunny will repay you with a lifetime of love and affection."

Anyone considering adopting a domestic rabbit should do their homework first and know what to expect, for although they're undeniably adorable, rabbits are not low-maintenance pets. They require a specific diet of hay, pellets and green vegetables, humane indoor housing in a bunny-proofed room, veterinary care when necessary and understanding of their emotional needs, which are different from cats and dogs.

They're not ideal pets for small children, as they respond best to quiet energy and can be easily spooked by the hyperactivity of a child. Most bunnies do not like to be picked up or held, may scratch or bite in an effort to get free, and can be seriously injured or even killed if they're dropped.

Advocates for the animals do want them to be adopted into loving homes, but they stress that adoption is a serious commitment that requires a willingness to learn the ropes.

Retail sales of rabbits, dogs and cats is prohibited in California, but direct sales are still permitted, including online, and illegal street sales occur in urban areas where baby bunnies are sometimes deceptively marketed as adult "dwarfs."

Bunny World Foundation offers a support group with free mentoring for new bunny owners. The group's Facebook page has a wealth of tips, but here are a few basics: