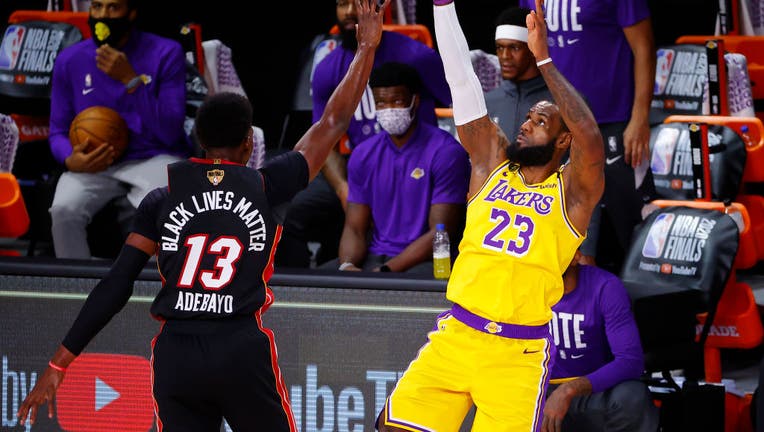 LAKE BUENA VISTA, FLORIDA - SEPTEMBER 30: LeBron James #23 of the Los Angeles Lakers shoots a three point basket against the Miami Heat during the first quarter in Game One of the 2020 NBA Finals at AdventHealth Arena at the ESPN Wide World Of Sports

LAKE BUENA VISTA, Fla. - The Miami Heat were not only badly beaten. They were beaten up.

Bam Adebayo (left shoulder strain) and Goran Dragic (left foot) departed with injuries and Jimmy Butler played through one in Game 1 of the NBA Finals. A series that started so impressively for the Heat could be a short one if their three best players are out or limited.

They were blown out 116-98 by the Los Angeles Lakers on Wednesday night, but their concerns go far beyond how can they compete.

Dragic didn’t play in the second half because of a torn left plantar fascia, a person with knowledge of the details told The Associated Press. The person spoke on condition of anonymity because no official announcement was made.

It was unclear how or when the veteran guard was hurt, or if he will be able to play in the remainder of the series.

The Slovenian is a veteran leader for the Heat, who acquired him in 2015, the season after their last NBA Finals appearance. He played as a reserve during the regular season but has been starting in the playoffs, and his six-point finish to Game 1 ended a streak of 33 consecutive postseason games in double figures.

“We’re still expecting to win. We still know that we can,” Butler said. “Like I said earlier, we want that guy out there with us. He’s a big part of what we’re trying to do, but until we can have him back, we got to go out there and we got to fight even harder.”

Just before halftime, Butler turned his left ankle on a drive to the basket. He was able to stay on the floor after a timeout for the final seconds, but the injury still appeared to be bothering him in the second half. The star swingman appeared to be hobbling when he landed after scoring while being fouled 13 seconds into the third quarter.

He said he felt some soreness after the game but would be OK with treatment.

“I’ve got to be ready to go, so we’ll see how it feels tomorrow but I’ll be fine,” he said.

Adebayo’s shoulder crashed hard into Dwight Howard as he drove into the lane with 7:03 left in the third quarter. Adebayo, Miami’s All-Defensive team center, is already wearing a sleeve on his left arm and was clearly hurting during the Eastern Conference finals against Boston.

The Heat said X-rays taken at the arena were negative. Coach Eric Spoelstra said he wasn’t sure if Adebayo had a lingering injury from the previous series.

“I don’t have that answer right now,” Spoelstra said. “We’ll reevaluate him tomorrow and see where we are.”

Adebayo overcame the injury to finish with 32 points and 14 rebounds in the Heat’s victory in Game 6 to eliminate Boston, but he couldn’t keep going Wednesday. He appeared to bang the arm again on a rebound attempt shortly after Howard fouled him and soon left the floor for treatment.

In case things weren’t bad enough by then, Butler appeared to be hobbling again after going back into the game in the fourth quarter.

Dragic averaged 22.8 points to lead the Heat in their first-round sweep of Indiana in the first round. Butler paced Miami with 23.4 per game when it knocked out top-seeded Milwaukee in the Eastern Conference semifinals and Adebayo scored 21.8 per game in the East finals, making the Heat the first team since the 1999 San Antonio Spurs to reach the NBA Finals with three leading scorers in each of the first three rounds.

That trio powered the No. 5 Heat to the finals as the lowest-seeded team since that year, when the Spurs beat the No. 8 New York Knicks.

The Heat then jumped on LeBron James and the Lakers with a quick 13-0 run — all but three points coming from Adebayo, Butler and Dragic — to open a 23-10 lead. But Los Angeles closed the quarter with a 21-5 finish to take a three-point lead to the second, when things quickly fell apart for Miami.

The Heat will try to bounce back Friday in Game 2. They just don’t know yet who can help them try to do it.