LOS ANGELES - The Los Angeles County Board of Supervisors Tuesday extended and doubled a reward for information leading to the person who fatally shot a 4-year-old boy in Altadena nearly six years ago.

Salvador Esparza III, who lived in Monrovia but was visiting family friends when the gunfire erupted, was shot about 10:40 p.m. July 5, 2016, in the 300 block of West Figueroa Drive.

The county Board of Supervisors originally offered a $20,000 reward for information in the case. That reward was increased to $25,000 last year. With the reward set to expire later this month, the board approved a motion by Supervisor Kathryn Barger to extend the reward offer, and increase it to $50,000. 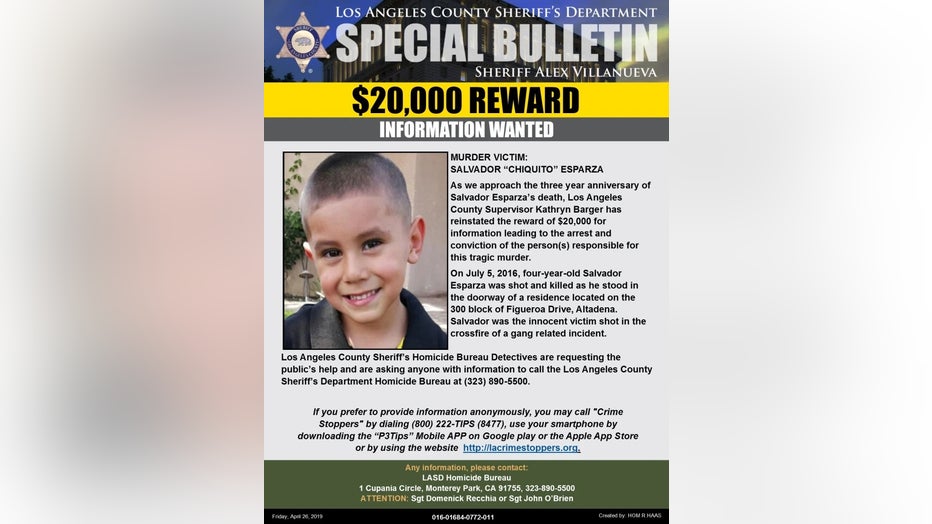 Sheriff's officials said the gunman walked up to the home, located just east of the 210 Freeway, and fired at least 13 rounds, striking the 4-year-old boy and a 27-year-old man, who was a family friend not related to the child. Both were taken to Huntington Memorial Hospital in Pasadena, where the boy was pronounced dead. The man survived.

Sheriff's officials said at the time that a person of interest had gotten into a heated, alcohol-fueled argument in the street with the live-in boyfriend of the boy's mother an hour or two before the shooting.

The boyfriend and his brother were the shooter's intended targets, sheriff's officials said.

The gunman, who sheriff's officials said is possibly a gang member who lived in the neighborhood, got into a dark car and left the scene. The attack was initially described as a drive-by shooting but investigators later determined the gunman walked toward the victims from the direction of Olive Avenue.

Anyone with information about the shooting was urged to contact sheriff's Sgt. Domenick Recchia at 323-890-5500 or, anonymously, Crime Stoppers at (800) 222-TIPS