Bekah King, Abi Roberts and Morgan Tabor didn't know each other until they found out they were dating the same man at the same time in 2020.

HELENA, Mont. - Bekah King, Abi Roberts and Morgan Tabor formed a friendship in the most unusual but inspiring way — they all dated the same man, and they were all cheated on by him.

They found out that their unidentified ex-boyfriend simultaneously dated the three of them without their knowledge. Rather than let the betrayal dictate their lives, they bought and converted a school bus and decided to take a cross-country trip together.

They found each other last December, when Tabor, 21, discovered her then-boyfriend was cheating after having a suspicion. She tracked down the other women and soon discovered the guy was dating at least five other women at the time.

"It was a cinematic masterpiece of a moment," she told FOX Television Stations Monday.

The trio of women said the unidentified boyfriend never offered a plausible explanation for why he cheated, often saying he was a "people-pleaser" and shifting fault to the women.

"We pretty quickly moved past him," King, 18, added. "We found our group of friends and just focused on healing and making this friendship work."

The trio then decided to cross something off their bucket list: a road trip across America. They saved, bought and transformed an old school bus into an RV of sorts for around $5,000. After that, they hit the road.

"We had all wanted to do to van life or live on the road at some point," Roberts, 19, of Salt Lake City said.

The BAM bus — named for their initials — left Boise, Idaho in late June. The ladies have traveled through much of Idaho, Montana and Wyoming, stopping by Yellowstone National Park and other landmarks along the way. 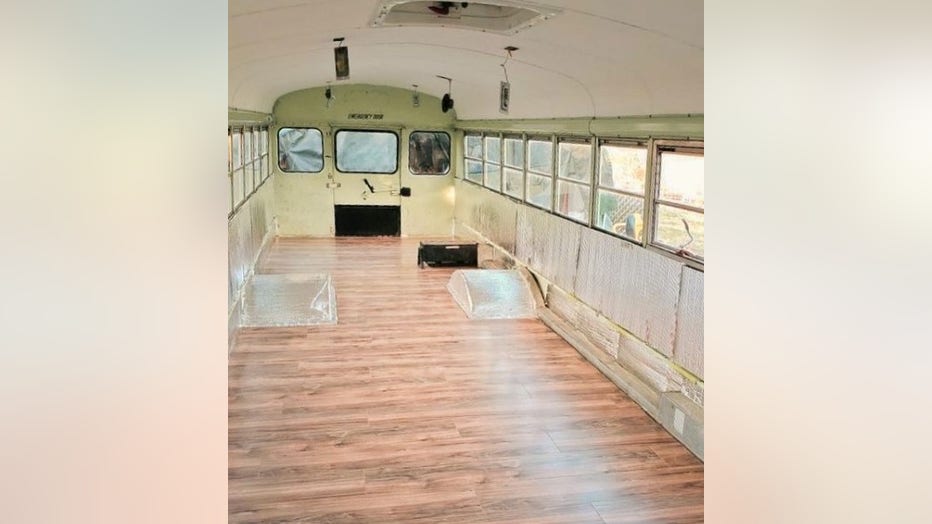 A look inside the BAM bus under renovation. (Credit: Morgan Tabor)

"We’re all really adventurous, and we love finding the adventure no matter where we are," King said. "Half of the adventures are the people you meet."

Safety is the utmost priority for the women, especially as they become known and meet more people. They don’t post to their Instagram page until after leaving a particular location. They also have other security measures onboard their bus. But so far, the trio said they haven’t had any troubling moments— other than some minor bus issues and temporarily not having insurance after a company dropped their coverage.

The women said they have learned a few things during their pilgrimage, including letting go of animosity and anger and taking risks.

"I’ve just learned to aim big and strive for your goals," Tabor added.

The group said they don’t know how much longer their road trip will continue. They had planned to end around November, but given the publicity, they believe they can make their journey last a lot longer.

FOX Television Stations was unable to reach the alleged ex-boyfriend. The women asked for his name not to be published, saying it’s not their intention to publicly humiliate him.

But he did break his silence to another media outlet.

"There are two sides to everything, but I think the best thing right now is to say nothing," he told the Washington Post on the condition of anonymity. "I really don’t want anything to do with them anymore."

The women would neither confirm nor deny that they’ve been approached with movie and book offers. Academy Award-winning actress Reese Witherspoon has liked some of their Instagram posts, however.