Nearly two dozen Ukrainian children battling cancer were safely flown from Poland to the United Kingdom to get life-saving treatment on Sunday, according to Sajid Javid, a member of Parliament and secretary of state for health and social care.

"I can confirm that 21 very ill Ukrainian children with cancer have landed safely in UK this evening. @NHSEngland
will now ensure they get life-saving care in safety. Hugely grateful to everyone involved in helping get these children and their families here," Javid wrote on Twitter.

Nine medical personnel from Southampton Children’s Hospital flew to Poland to retrieve the children, according to the BBC.

"The families were so incredibly grateful and the stories they told were horrific," the hospital told the BBC.

"I am proud that the UK is offering lifesaving medical care to these Ukrainian children, who have been forced out of their home country by the Russian invasion while undergoing medical treatment. I know that the incredible staff in the NHS will ensure they get the best possible care. I am hugely grateful to our partners and our Polish friends for their support in bringing these children to the UK. We stand together with the people of Ukraine and will continue to do all we can to help them," Javid said in a March 13 news release.

The children will receive treatment free of charge, according to the British government.

"I am hugely grateful to our fantastic NHS staff as well as our partners, including our Polish friends, for their support in bringing these children to the UK and we will continue to do all we can to support them as they continue their critical treatment here," British Prime Minister Boris Johnson said, according to a news release.

Meanwhile, Britain’s government announced it will pay a monetary reward to people who offer their homes as a refuge to Ukrainians fleeing the Russian invasion. Officials said Sunday the "Homes for Ukraine" program, to be introduced this week, will see sponsors receive a government payment of 350 pounds ($456) per month.

So far, more than 1.5 million refugees have arrived in Poland since the start of Russia’s invasion of Ukraine on Feb. 24 — out of a total of around 2.7 million people that the United Nations say have fled. 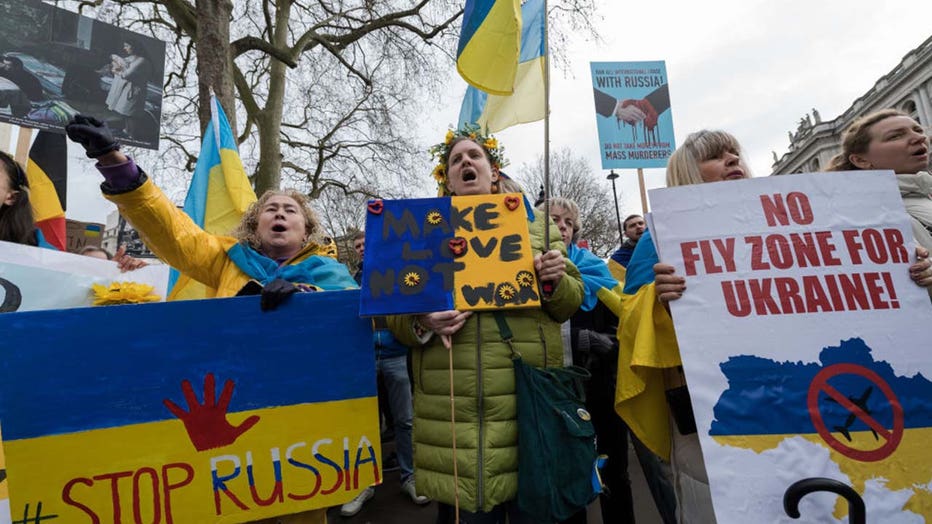 FILE - Ukrainian people and their supporters demonstrate against war outside Downing Street on the 18th day of the Russian military invasion in Ukraine on March 13, 2022 in London, England.

Polish border guard spokeswoman Anna Michalska said that the numbers of refugees arriving have eased in the past week with about 79,800 arriving on Saturday, compared to 142,000 a week earlier. In Romania, 29,636 refugees arrived on March 7, with the number dropping to 16,676 on Saturday.

Most of the refugees fleeing Ukraine have been women and children, because men from 18-60 have stayed behind to fight and are forbidden from leaving the country. Many already have moved to other countries in Europe, mostly to stay with friends and family there.

At dawn on Sunday, a bus carrying about 50 Ukrainian refugees overturned on a major highway in northern Italy, killing one person, Italian firefighters said.

The U.N. has recorded at least 596 civilian deaths, though it believes the true toll is much higher. Ukraine’s Prosecutor General’s office said that at least 85 children are among the dead.

The Ukrainian government meanwhile announced plans for new humanitarian aid and evacuation corridors Monday and a top Red Cross official says the war has become "nothing short of a nightmare" for those living in besieged cities.