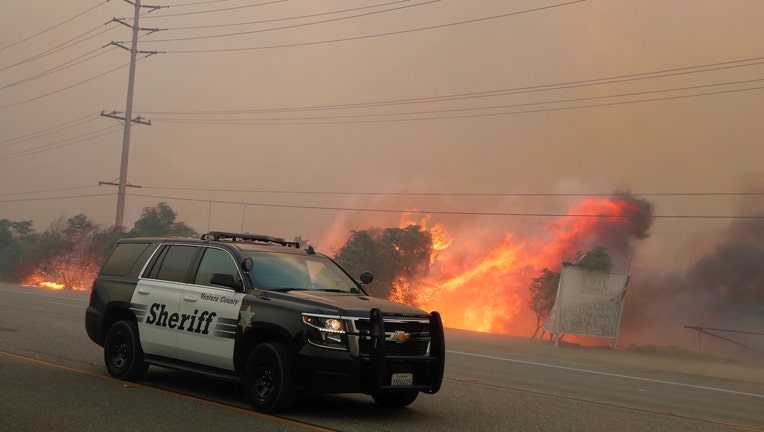 The Easy fire approaches power lines next to the road October 30, 2019 in Simi Valley, California. Fueled by the Santa Ana winds, the fire has quickly spread to 1300 acres. (Photo by Al Seib/Los Angeles Times via Getty Images)

The investigative results for two fires that broke out northwest of Los Angeles a year ago were released as power cuts were underway in parts of Northern California to prevent electrical equipment from igniting fires amid gusty, dry weather.

The 1,800-acre Easy Fire, which threatened the library and nearby Simi Valley homes, ignited Oct. 30, 2019, when an insulator attached to a Southern California Edison high-voltage transmission line swung into a steel power pole during windy, dry conditions, the Ventura County Fire Department said in a statement.

At the time, the utility reported to state regulators that its equipment may have been involved in the fire, which damaged two buildings.

The Ventura County department also said the Maria Fire near Santa Paula was ignited the next day by failure of a conductor on an electrical distribution line owned by California Resources Corp.

“Fire investigators found that an electrical conductor separated and contacted a metal pipe on the ground, igniting the fire,” the department said.

Nearly 15.6 square miles were scorched, and four buildings were damaged.

California Resources Corp., a publicly traded oil and gas exploration and production company, said in a statement that Southern California Edison was at fault.

The fire started when Southern California Edison “reenergized its power distribution to our field after a power safety shutdown without giving us prior notice and opportunity to inspect our equipment,” it said.

The company said it has filed a lawsuit against the utility in Ventura County Superior Court regarding the fire.

In Northern California, a public safety power shutoff begun by Pacific Gas & Electric on Wednesday night was underway in parts of nine counties, affecting around 32,500 customers. Changing weather allowed the utility to exclude six other counties.

The shutoffs included parts of Butte County, where a 2018 blaze ignited by Pacific Gas & Electric equipment destroyed much of the town of Paradise and killed 85 people.

Southern California, meanwhile, was benefiting from a cooling trend with night through morning low clouds and fog, and occasional drizzle. Light rain was possible during the weekend, followed by clear skies with gusty Santa Ana winds and a warming trend early next week, forecasters said.

California was free of drought indicators at the start of the year, but most of the north is now deep into extreme or severe drought, according to the U.S. Drought Monitor. Moderate drought extends down the state’s eastern flank into the deserts. ut counties along the southern and central coast remain drought-free.

Numerous studies have linked bigger wildfires in America to climate change from the burning of coal, oil and gas. Scientists say climate change has made California much drier, meaning trees and other plants are more flammable.

More 8,600 wildfires have scorched well over 6,400 square miles and destroyed about 9,200 buildings in California this year. There have been 31 deaths.

All of the huge fires have been fully or significantly contained, but more than 6,000 firefighters remain committed to 19 blazes, including a dozen major incidents, the California Department of Forestry and Fire Protection said.

Many of this year’s devastating fires were started by thousands of dry lightning strikes. But some of the fires remain under investigation for potential electrical causes.