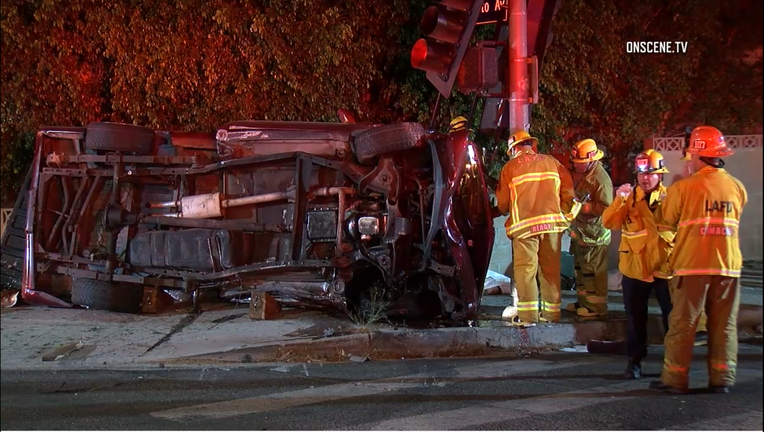 LOS ANGELES, Calif. (FOX 11/ CNS) - The Coroner's Office on Sunday publicly identified one of the two men killed near Chatsworth by a 21-year-old hit-and-run motorist, who was later arrested on suspicion of felony vehicular manslaughter.

Ernesto Javier Chinchillas Castro, 42, of Lancaster, was one of the two men who burned to death in the hit-and-run crash, according to Investigator Rudy Molano of the coroner's office.

The name of the second man will be released pending notification of next of kin, Molano said. He was also in his 40s.

Dylan Shane Rutherford was arrested and his passenger, an unidentified woman, was detained but later released, according to Officer Mike Lopez of the Los Angeles Police Department's Media Relations Section.

Lopez said he had no place of residence for Rutherford.

The hit-and-run crash was reported at 10:30 p.m. Friday at De Soto Avenue and Chatsworth Street.

Rutherford's black Ram 1500 truck was going east on Chatsworth, and hit a a 1991 maroon GMC pickup truck that had been going northbound on De Soto, Lopez said.

Police said the GMC overturned and caught fire with two people trapped inside.

The Los Angeles Fire Department pronounced Castro and the car's other occupant, dead at the scene.

Rutherford and his passenger bailed out and ran north on De Soto, according to LAPD Officer R. Carter. Police searchers were able to search and find Rutherford, as well as his passenger, Lopez said.