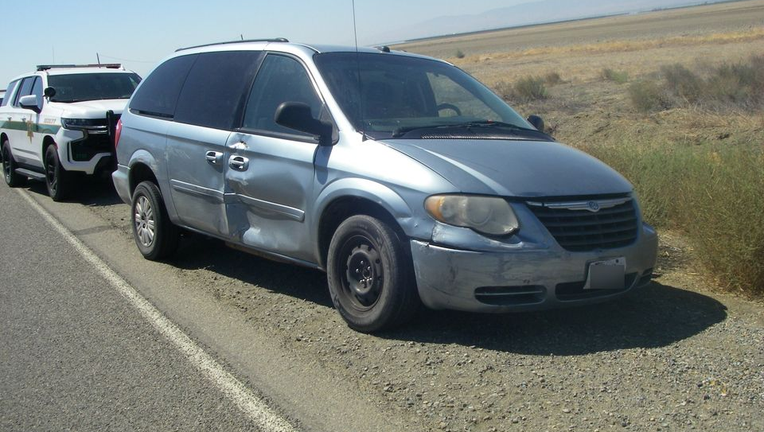 FRESNO COUNTY, Calif. - A 12-year-old California boy has been arrested on suspicion of stealing his family’s van and then leading deputies on a high-speed chase, according to authorities.

The Fresno County Sheriff’s Office said a deputy was patrolling the Riverdale area Monday morning when he saw a large cloud of dust.

As the deputy approached the scene, a resident told him that a mini-van struck an advertisement sign and drove away.

The deputy was able to catch up with the van and tried to get the driver to make a traffic stop, but the driver sped away topping speeds of over 70 mph, running into stop signs, and driving on the opposite side of the road.

Investigators said deputies made several attempts to stop the van by laying down spike strips, but the driver was able to avoid them. In one instance, the driver tried to swerve around a spike strip and nearly hit a sergeant.

"As the boy turned away from the sergeant, back toward the middle of the road, he ran over the spike strip," the sheriff’s office posted on Facebook.

"His mini-van suffered damage to a tire," the statement continued.

Deputies said they were able to detain the suspected boy and book him into the juvenile hall. He’s charged with auto theft, evading police and assault with a deadly weapon.

They believe the boy stole the family van to drive from Hanford, California, to Sacramento, where he used to live.