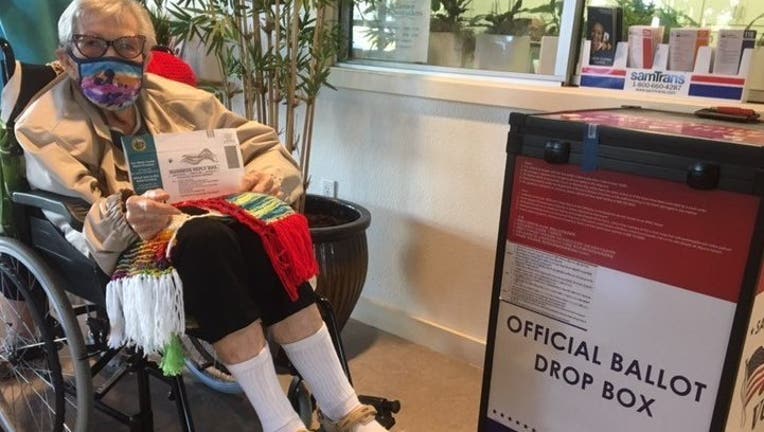 103-year-old Nina Jarvis, of Half Moon Bay has never missed an election. She cast her ballot last week.

HALF MOON BAY, Calif. - At 103, Nina Jarvis of Half Moon Bay has never missed an election. And even in the midst of a pandemic, this election would be no exception.

Last week, with help from her dear friend and neighbor, Kathy Railsback, Jarvis sent off her ballot at a location not far from her home. She sat in her wheelchair, with a scarf that she knitted herself on her lap, a coloful Mickey Mouse mask on her face, and to the cheers of a small group that had gathered around for the occasion, she placed her ballot in a drop box.

It would be the 22nd ballot the native Texan cast in a presidential election-- the first one being in 1932 when Democrat Franklin D. Roosevelt defeated Republican incumbent President Herbert Hoover.

And this election, 88 years later, Jarvis would say was the most important of her lifetime.

“‘I just hope I’ll live to make it to the election,’” Railsback recalled Jarvis saying jokingly a few months ago, as she noted that her friend was in great health for her age, and quite independent, still living on her own. Railsback also pointed out that Jarvis was quick to mention that she was 103 and 3/4, with her birthday coming up in January.

Railsback described her friend as one-of-a-kind. “She keeps up with politics, knits scarves & reads. She still cares for herself, cooks a yummy chicken soup and lives in her senior apt.”

The two live in the same apartment community and have forged a strong bond over the years. They've kept each other company, shared meals, and shared stories-- valuable moments, especially amid the isolation that has been so much a part of this pandemic. Railsback, who is 68-years-old, told KTVU she considered Jarvis her best friend, noting she's about the same age that her own mother would have been.

Railsback has cherished the stories her friend has shared, priceless stories from another time, when covered wagons and the gathering of chopped wood were involved.

And when asked, why this election was so important to someone who had been born even before women were given the right to vote, someone who had lived through a pandemic as a child, lived through wars, lived through the civil rights movement and other pivotal moments in this country's history. “She always says that she can't believe all the stuff that’s going on right now,” Railsback explained, adding that her friend would say so “not in a sad way,” but in a matter of fact manner from someone who has seen a lot in her 103 years of living.

And for Jarvis, she saw no excuses for not voting, demonstrated by her determination to have her voice heard in this election. Her message in a straight forward, matter of fact manner: “If I can get out and vote, so can you!”