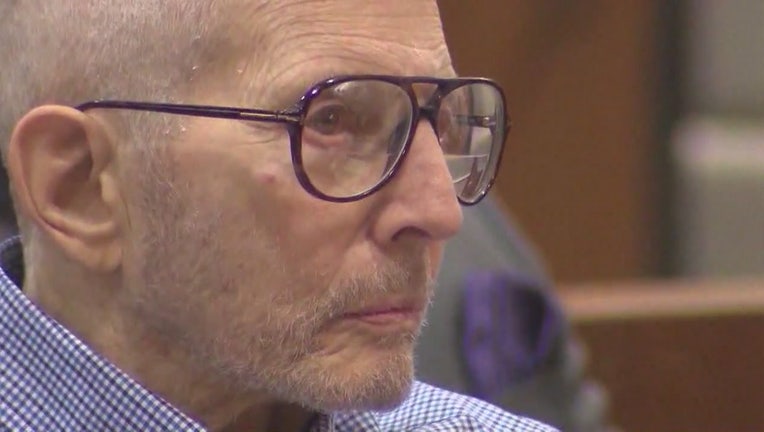 LOS ANGELES - The last time Robert Durst was on trial for murder, he testified that he had dismembered his elderly neighbor’s body, put it in garbage bags and tossed them in the Gulf of Mexico.

He was still acquitted and set free, with Texas jurors in 2003 accepting his testimony that Morris Black had died in a struggle over a gun.

When opening statements begin Wednesday in Durst’s next murder trial, for the killing of his close friend Susan Berman nearly 20 years ago, Los Angeles County prosecutors will have an even harder case to prove; one that unlike the last almost entirely lacks physical evidence.

Prosecutors hope a wide web of circumstantial evidence and a compelling tale of a multimillionaire real estate heir who they say has dodged justice for decades is enough to convict the 76-year-old.

"No direct evidence implicates Durst in the murder except for a note to the police and Durst’s own rambling and sometimes incoherent statements," said Neama Rahmani, a former federal prosecutor and co-founder of West Coast Trial Lawyers who has been following the Durst developments but is not involved in the case. "Prosecutors have their hands full."

One murder charge and three deaths loom over Robert Durst as his trial begins in the Del Aire neighborhood of Los Angeles.

Prosecutors say Durst killed both Berman in 2000 and Black in 2001 to cover up his role in the 1982 disappearance of his wife Kathleen "Kathie" Durst, which has made her husband a magnet for suspicion and media attention for nearly 40 years. She was later declared dead despite no body being found.

At trial, they will be allowed to present evidence from all three cases as they attempt to prove that Robert Durst shot Berman, a writer and mobster’s daughter who for years had acted as his unofficial spokeswoman, in her Beverly Hills apartment to keep her from talking to New York police in their reopened investigation of his wife’s death.

Prosecutors wrote in court filings that Durst “devised and carried out a diabolical plan to cover up the killing of his wife which ultimately cost two other people their lives.″

"The prosecution will essentially be retrying his wife’s death in order to establish motive," said veteran criminal defense attorney Lara Yeretsian, who also has no role in the case. "This will be like two murder trials in one."

Durst has denied any role in the disappearance of his wife, and says he did not kill Berman and does not know who did.

Deputy District Attorney John Lewin, the lead prosecutor, will attempt in his opening statement to give new life to evidence that has been public knowledge for years through constant coverage of Durst in New York media, the 2010 feature film “All Good Things” starring Ryan Gosling and Kirsten Dunst, and a 2015 HBO documentary series in which Durst’s words, in particular a notorious hot-mic moment, led to his arrest on the eve of the airing of the final episode.

"What the hell did I do? Killed them all, of course," Durst can be heard muttering in the concluding moments of the documentary.

Defense attorneys say Durst was smeared by deceptive editing, but prosecutors call it a confession, and it is likely to loom large at trial, where jurors will be shown unedited footage from the filming of HBO’s “The Jinx.”

• Robert Durst pleads not guilty to 2000 murder in LA court

In court documents describing the urgency of Durst’s arrest, prosecutors wrote that "while wearing a microphone during the production of what would become The Jinx: The Life and Deaths of Robert Durst, Defendant confessed to killing multiple people. The Jinx’s final episode, which included this recorded statement, was about to become public and defendant was about to hear for the first time this extremely damning evidence."

With no fingerprints, DNA or murder weapon recovered from Berman’s murder scene, the key evidence will most likely be a slip of paper with the word “CADAVER” written on it, which Durst mailed to authorities apparently intending to lead them to the body.

Durst’s attorneys have conceded that he wrote the note, which Durst denied doing for years.

The defense plans an all-out attack on the dearth of direct evidence against Durst.

"Our defense is: One, he didn’t do it, and, two, they can’t prove beyond a reasonable doubt that he did it," defense lawyer David Chesnoff said during the run-up to the trial. "It is a highly circumstantial case and we will have strong responses to explain the circumstances."

Rahmani said the jury may be receptive.

"Even though the law gives equal weight to direct and circumstantial evidence,” she said, “some jurors have difficulty or are outright unable to find guilt beyond a reasonable doubt without physical evidence."

Prosecutors will also lean on second-hand confessions that emerged in pretrial testimony, from one witness who said Durst told him he killed Berman, and from others who say Berman revealed to them that Durst told her he killed his wife, and that Berman had helped him cover his tracks.

The jury of eight men and four women may hear from more than 100 witnesses in the trial expected to last five months.