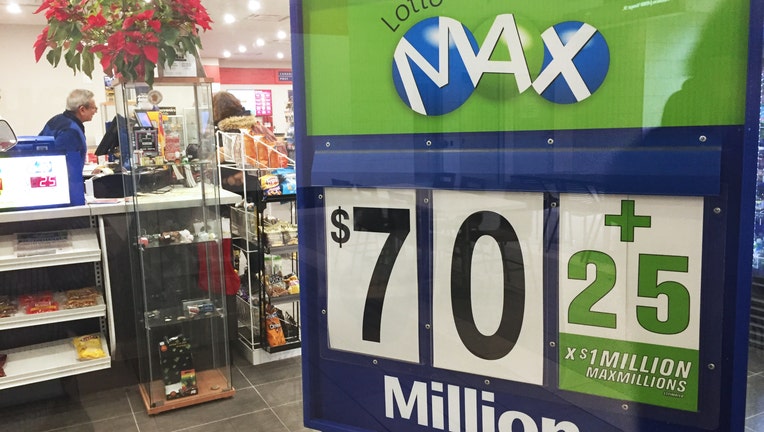 Sign seen in a shop as the largest lottery jackpot in Canadian history is up for grabs on January 07, 2020. The Lotto Max jackpot is worth $70 million. (Photo by Creative Touch Imaging Ltd./NurPhoto via Getty Images)

TORONTO - A woman won a $60 million lottery jackpot after playing numbers that appeared in her husband’s dream.

"My husband had a dream about some lottery numbers 20 years ago," Deng Pravatoudom said in a news release from Ontario Lottery and Gaming. Ever since, she’s played the same numbers, with the big payoff finally coming last month.

According to lottery officials, Pravatoudom is a mother of two adult children and has two grandchildren.

Due to the COVID-19 pandemic, she didn’t celebrate her win in person with family, friends or the media. Instead, she held a virtual celebration after collecting her prize from the OLG Prize Centre in Toronto.

John and Allison McDonald of England won a $2.6 million lottery and their teenage son was given the all-clear from his battle with non-Hodgkin's lymphoma.

Pravatoudom is an immigrant who came to Canada from Laos in 1980 with her 14 siblings.

"My family was sponsored by a local church and because we had nothing, I am thankful for the great support they provided us over the years," she said. "My husband and I have worked long hours as general laborers for over 40 years, trying to save what we could for our family. Due to the pandemic, I was laid off last spring, so this money will certainly help make our lives much easier."

Pravatoudom said she’s a regular lottery player and plays the same numbers from her husband’s dream for the past 20 years.

"I left my temple after prayers, went to a nearby mall for some errands and to check my LOTTO MAX ticket. I won a Free Play ticket and added ENCORE," she added. "I couldn’t believe a few days later that free ticket would be worth $60 million!"

Her husband broke the news to her.

"I went to the bank to pay some bills and my husband went to check the tickets. When we got into the car, he told me we won the $60 million jackpot. He was serious, not joking, so I knew he was telling the truth," she explained. "I started to cry. I have always prayed for a blessing that my family would be taken care of!"

The couple plans to move out of their apartment and buy a new house with the winnings in addition to paying off some bills and offering help to immediate and extended family.

They also would like to travel when it’s safe to do so.