Hurricane Zeta made landfall as a Category 2 hurricane Wednesday afternoon.

NEW ORLEANS (AP) - Millions of people were without power and at least six were dead Thursday after Hurricane Zeta slammed into Louisiana and made a beeline across the South, leaving shattered buildings, thousands of downed trees and fresh anguish over a record-setting hurricane season.

Zeta was a post-tropical storm Thursday evening with maximum sustained winds of 50 mph. The last of the heavy rainfall was expected over the mid-Atlatnic through the evening.

From the bayous of the Gulf Coast to Atlanta and beyond, Southerners used to dealing with dangerous weather were left to pick up the pieces once again just days ahead of an election in which early voting continued despite the storm.

In Atlanta and New Orleans, drivers dodged trees in roads and navigated intersections without traffic signals. In Lakeshore, Mississippi, Ray Garcia returned home to find a shrimp boat washed up and resting against its pilings

"I don’t even know if insurance is going to pay for this,” Garcia said. “I don’t know what this boat has done.”

Georgia remains the worst overall state for outages, with nearly 500,000 customers still without power in the Atlanta area and the northern parts of the state.

However, larger percentages of customers are without power in Louisiana and Alabama, with more than one-fifth of monitored meters without electricity.

In Jackson County, on the Mississippi coast, Circuit Clerk Randy Carney says the county's courthouse lost power during the storm and has been operating on a generator.

The courthouse had to close down Wednesday afternoon because of Zeta, but Carney says they managed to open the office around 10 a.m. Thursday with about a third of the staff. He says 20 people had come to the building to vote before noon, compared to nearly 200 who voted on Wednesday.

Trailers, small trucks, and boats were seen overturned and strewn on the side of a highway in St Bernard Parish, Louisiana, on October 29, the day after Hurricane Zeta hit the region.

That’s a massive dip from the 400 voters a day Carney says he was seeing earlier this week.

Despite less people coming in to vote because of the storm, Carney says he doesn’t think the storm will have an impact overall on people’s ability to vote in the election.

The remnants of Hurricane Zeta also cut power for tens of thousands of people in North Carolina and blocked highways and streets with downed trees.

The newspaper reports falling trees had blocked U.S. 421 southbound, but traffic was moving again within an hour. Other roads were also reported to be blocked, and some houses were damaged by falling trees.

Authorities say a tree fell on a pickup truck as it was being driven. The driver was taken to a hospital, but was not reported to be seriously injured.

A Category 2 hurricane when it hit the southeastern Louisiana coast Wednesday, Zeta was still a tropical storm late Thursday morning with maximum sustained winds of 50 mph (85 kph) about 100 miles (155 kilometers) northeast of Asheville, North Carolina — unusual even in a region accustomed to hurricanes and their aftermath.

Hundreds of schools canceled classes or planned to open late across from the Gulf Coast to the Carolinas, and widespread power outages occurred across six states from Louisiana to the south Atlantic seaboard. Some places could be in the dark for days.

The latest punch from a record hurricane season left people shaken. Will Arute said it sounded like a bomb went off when part of a large oak snapped outside his home in New Orleans, and part of the tree crashed into his car and a corner of his home.

“I did not anticipate this to happen. It was pretty intense along the eye wall when it went through here," he said.

Mackenzie Umanzor did not prepare much because the last hurricane to threaten her home a few weeks ago in D’Iberville, Mississippi, did little damage. Zeta blew open doors that she had tried to barricade, leaving her with a cut hand, and the top of her shed came loose.

“You could hear the tin roof waving in the wind. ... It was just rattling. And there was a couple of snaps, lots of cracks of branches and trees falling," she said. "It was pretty scary.”

Officials said life-threatening conditions would last into the day, with Zeta crossing the mid-Atlantic states as a tropical storm before moving offshore around Delaware and southern New Jersey.

Leslie Richardson, 58, drowned when he was trapped in rising seawater in Biloxi, Mississippi, after taking video of the raging storm, Harrison County Coroner Brian Switzer said. Richardson and another man exited a floating car and desperately clung to a tree before his strength “just gave out,” Switzer said. About 25 miles (40 kilometers) west in Long Beach, a large boat was washed up on the beachfront highway.

A fast-moving Zeta has weakened to a tropical storm as it barrels northeast after causing havoc along the coast. (Credit: nicolaas_migliore via Storyful)

A 55-year-old man was electrocuted by a downed power line in New Orleans, a Louisiana coroner said. In Georgia, authorities said a man was killed when high winds caused a tree to fall onto a mobile home in Cherokee County.

Morning rush hour happened despite major power failures in Atlanta, but commuters had to dodge downed trees and navigate their way past signals with no power. Trees blocked lanes on two interstates, the Georgia Department of Transportation said.

Northwest of Atlanta in Marietta, many stoplights were out and police directed traffic at a busy intersection. One residential street was covered by mix of campaign signs, amber and gold leaves, and limbs tossed by the storm. A few streets away, Billy Murdock was out picking up branches in his yard. 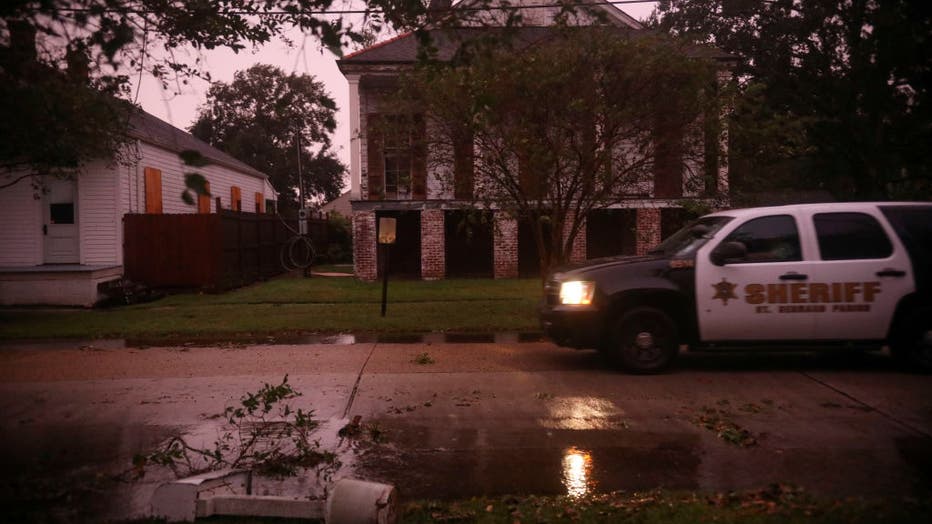 Debris on the streets is seen while Hurricane Zeta passes over on October 28, 2020 in Arabi, Louisiana. (Photo by Sandy Huffaker/Getty Images)

“These big old trees, they were swaying. It bothers you,” Murdock said. “It’s the worst storm I’ve been through in Atlanta.”

The storm raged onshore Wednesday afternoon in the small village of Cocodrie, Louisiana, as a strong Category 2 and then moved swiftly across the New Orleans area. The morning after in New Orleans' French Quarter, the wind was blowing lightly as a few people walked to work and some residents swept leaves in front of their houses.

Waveland Mayor Mike Smith told WLOX-TV that his Mississippi Gulf Coast city, which was part of the area most heavily damaged by 2005’s Hurricane Katrina, had taken what might be the worst hit since then from Zeta.

Among the many trees blown down was one that fell on Smith’s own house. “It was my next-door neighbor’s and he wanted to give it to me, apparently,” Smith said.

In Louisiana, Gov. John Bel Edwards was expected to tour the coastal regions hardest hit by the storm Thursday.

Zeta left much of New Orleans and the surrounding area without power as 200 falling trees and more limbs pulled down utility lines. Signs outside bars and restaurants swayed back and forth in the wind and palm trees along Canal Street whipped furiously as the storm passed.

Along coastal Louisiana, there were reports of some trailers flipped over, a gas station destroyed, and downed power lines and trees.

Zeta is the 27th named storm of a historically busy Atlantic hurricane season — with more than a month left to go. It set a new record as the 11th named storm to make landfall in the continental U.S. in a single season, well beyond the nine storms that hit in 1916. This extraordinarily busy season has focused attention on climate change, which scientists say is causing wetter, stronger and more destructive storms.

On Tuesday, Zeta raked across Mexico’s Yucatan Peninsula, toppling trees and briefly cutting power to more than 300,000 people but causing no deaths.

It then regained strength over the Gulf of Mexico along a path slightly to the east of those of Hurricane Laura, which was blamed for at least 27 deaths in Louisiana in August, and Hurricane Delta, which exacerbated Laura’s damage in the same area weeks later.

The deteriorating weather prompted early voting sites to close for hours in the western Florida Panhandle. One voter in Mississippi worried about how long felled trees and debris might block roads.

Thursday was the last day to request an absentee ballot or vote by absentee in person in Alabama, and power was out across parts of the state including heavily populated Mobile on the coast. Mobile County tweeted that the absentee voting office still would be open for normal business hours, but other county offices were closed. Voters, some holding umbrellas, waited outside the county courthouse in Birmingham to cast ballots.