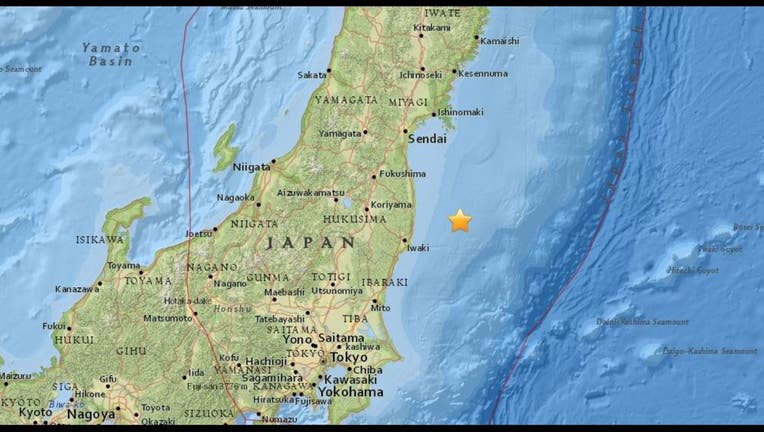 TOKYO (AP) - TOKYO (AP) -- Coastal residents in Japan were ordered to flee to higher ground on Tuesday after a strong earthquake with preliminary magnitude of 7.3 struck off the coast of Fukushima prefecture.

The Japan Meteorological Agency issued a tsunami warning for waves of up to 3 meters (10 feet) in Fukushima, and a tsunami advisory for much of the rest of northeast Japan's Pacific coast.

Tsunamis of up to 90 centimeters (3 feet) were recorded about an hour after the 6 a.m. earthquake.

Fukushima prefecture is home to the nuclear power plant that was destroyed by a huge tsunami following an offshore earthquake in 2011.

The operator of the plant said there were no abnormalities observed at the plant, Japanese public broadcaster NHK said.

The U.S. Geological Survey measured the magnitude at 6.9. The earthquake shook buildings in Tokyo, 240 kilometers (150 miles) southwest of the epicenter.

The meteorological agency said the quake struck at a depth of 10 kilometers (6 miles).

NHK urged people to evacuate immediately, reminding them of the devastating 2011 quake that killed about 18,000 people.

There were no immediate reports of damage or injury.