NEW YORK - Members of the U.S. women's soccer team waved from floats as fans cheered during a victory parade up the Canyon of Heroes in Lower Manhattan Wednesday.

'Ticker-tape' - named for the long strands of ticker tape that used to be showered down from office buildings, but has since been replaced with paper confetti-- rained down on the FIFA Women's World Cup champions. 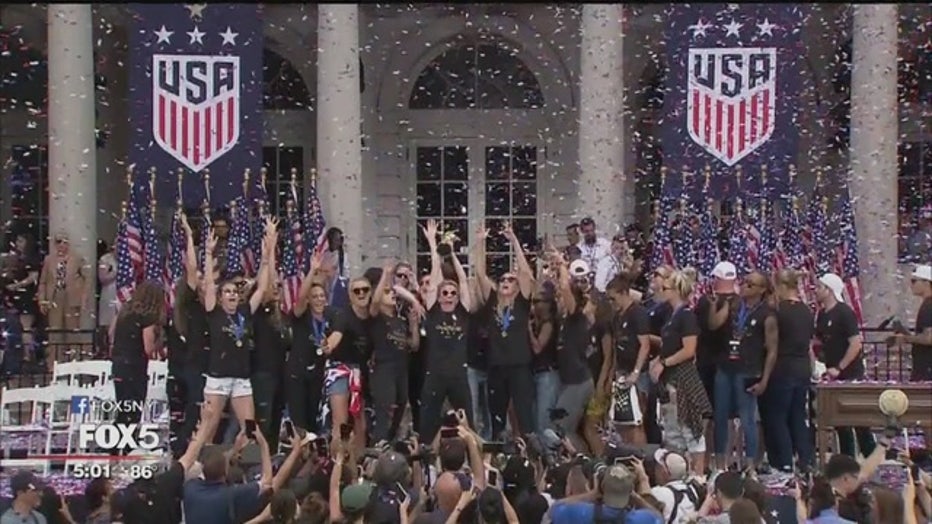 Co-captain Megan Rapinoe and her teammates shared a float with Mayor Bill de Blasio and U.S. Soccer Federation president Carlos Cordeiro. Rapinoe struck her now-famous victory pose, took a swig of Champagne and handed the bottle to a fan.

Team members, family, friends and politicians made their way up Broadway from Battery Park to City Hall where a ceremony was held honoring the team.

Chants of 'equal pay' were heard repeatedly as the players took to the dais in front of City Hall.

The team has sued the U.S. Soccer Federation for gender and pay discrimination.

The women will get bonuses about five times less from the USSF than the men would have earned for winning the World Cup. The case is currently in mediation.

The team was introduced one by one and were later given symbolic keys to the city.

He said women's soccer players should be paid the same as male players.

U.S. Sen. Joe Manchin, a Democrat, introduced a bill Tuesday that would bar federal funding for the men's 2026 World Cup until the U.S. Soccer Federation provides equal pay to the women's and men's teams.

A day earlier, the team hit the streets of NYC to celebrate.

Fans waited outside of their downtown Manhattan hotel as the players went to and from dining and shopping excursions.

Blocks away, the Alliance for Downtown New York separated a ton of shredded recycled paper into bags to be distributed to businesses along the Canyon of Heroes.

Jessica Lappin, the president of the Alliance, predicted crowds would be bigger than at 2015's parade.

"I think there are going to be bigger crowds, people are really inspired by these women," she said. "They have struck a nerve both in terms of their fight for civil rights, their accomplishments, their grit."

Ahead of the big celebration, fans were buying swag at soccer store Upper 90 in Downtown Brooklyn. Zev Eiger purchased two USWNT home jerseys for his daughter Aviva, who is just two, but already loves to play soccer.

"The plan is to see if we can get them signed, so we'll try but I don't know," Eiger said.

Store manager Robbie Baum said the last week had been consistently busy between the run-up to the final, and now the parade.

Text USACHAMPS to 692692 to receive important alerts and notifications!

The parade is free and open to the public. It kicks off from Battery Place at 9:30am, so don't be late!#USWNC #OneNationOneTeam pic.twitter.com/JovxaSWHzy