"Congratulations to the U.S. Women's Soccer Team on winning the World Cup!" Trump tweeted "Great and exciting play. America is proud of you all!" 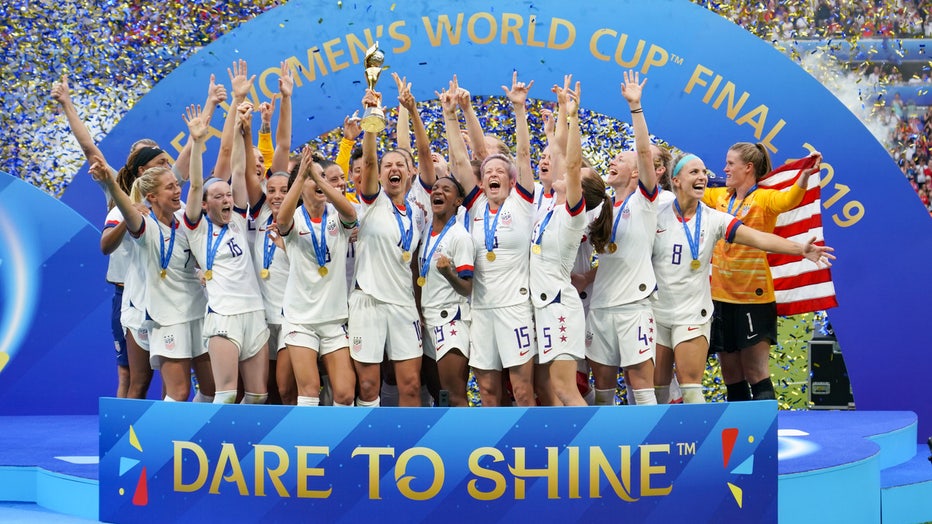 Asked by reporters later in the day whether men and women World Cup soccer teams should make the same money -- which Rapinoe has demanded -- Trump responded, "I would like to see that, but you've also got to look at numbers... you have to look at who's taking in what" and "see how they're performing."

"I don't know what those numbers are," Trump added. "And you have to see year round, how are they all drawing --- what is the attendance for women's soccer outside of World Cup. But I would like to see it." (In a viral moment during the 2016 presidential campaign, Trump responded curtly to an activist concerned about women's pay, "You're gonna make the same if you do as good a job.")

Rapinoe, the pink-haired team captain who emerged with the Golden Ball as top player and the Golden Boot as top scorer, has been an outspoken opponent of what she's described as systemic gender inequality in the United States. Rapinoe previously knelt during the national anthem prior to rules changes that barred the practice.

Congratulations to the U.S. Women's Soccer Team on winning the World Cup! Great and exciting play. America is proud of you all!

"I'm not going to the f------ White House," Rapinoe said in a widely publicized magazine interview in June. "No f------ way will we be invited to the White House. [Trump] tries to avoid inviting a team that might decline. Or, like he did when the [Golden State] Warriors turned him down, he'll claim they hadn't been invited in the first place."

Rapinoe has largely stood by her comments in recent weeks, except for the explicit language she used. On Saturday, Rapinoe said that she believed that "not many, if any" of her teammates would visit the White House if they won the final against the Netherlands.

Meanwhile, one of her teammates, Ali Krieger, expressed support for Rapinoe's refusal to go to the White House and said she wouldn't attend either.

CLICK HERE TO GET THE FOX 46 CHARLOTTE NEWS APP

"I refuse to respect a man that warrants no respect," Krieger told CNN. "I feel that staying silent at times can side with the oppressor and I didn't want her to feel like she was having to process this all alone, because a lot of us do have those similar feelings."

Trump had responded earlier this week to Rapinoe's initial remarks with a mixture of criticism and magnaminty.

"Megan should never disrespect our Country, the White House, or our Flag, especially since so much has been done for her & the team," Trump tweeted. "I am a big fan of the American Team, and Women's Soccer, but Megan should WIN first before she TALKS! Finish the job!"

Trump added, "We haven't yet invited Megan or the team, but I am now inviting the TEAM, win or lose."

Rapinoe previously said the pay disparity for champions in women's soccer, compared to the men, was "not fair," and called for doubling or even quadrupling the prize money awarded to women's teams.

FIFA President Gianni Infantino recently announced a proposal to expand the 2023 Women's World Cup from 24 to 32 teams and double the prize money from $30 million to $60 million. However, the men's 2022 World Cup in Qatar has a prize purse set at $440 million, up from $400 million in Russia last year.

According to audited financial reports from the U.S. Soccer Federation, U.S. women's games in recent years have out-earned men's games. However, because ticket sales are just one revenue stream -- and because broadcast rights are sold as bundles -- it is difficult to parse from available data which games actually generate more money.

In the end, U.S. indeed won its record fourth Women's World Cup title and second in a row, beating the Netherlands 2-0 Sunday after Rapinoe converted a tiebreaking penalty kick in the second half and Rose Lavelle added a goal.

Following the win, chants of "equal pay" broke out at the stadium in Lyon, France -- a reminder that players sued the U.S. Soccer Federation in March claiming gender discrimination.

Rapinoe scored in the 61st minute after a video review determined Stefanie van der Gragt had fouled Alex Morgan with a kick to the shoulder in the penalty area.

Two days past her 34th birthday, Rapinoe slotted the ball past goalkeeper Sari van Veenendaal for her sixth goal of the tournament. The oldest player to score in a Women's World Cup final, she struck a familiar victorious pose with arms outstretched.

"It's surreal. I don't know how to feel like now. It's ridiculous," Rapinoe said. "We're crazy and that's what makes us so special. We just have no quit in us. We're so tight, and we'll do anything to win."

Lavelle, at 24 the team's up-and-coming star, added her third goal of the tournament on an 18-yard left-footed shot in the 69th after a solo run from the center circle.

"She's superstar, not even in the making, she's straight up superstar at this point," Rapinoe said.

The Americans never trailed in the tournament and set records with 26 goals and a 12-game World Cup winning streak dating to 2015. U.S. coach Jill Ellis became the first coach to lead a team to two Women's World Cup titles, and the U.S. joined Germany in 2003 and 2007 as the only repeat champions.

It's just chemistry. They put their hearts and soul into this journey," Ellis said. "They made history."

Infantino handed over the trophy, a stark contrast to four years ago in Canada, when then-president Sepp Blatter was a no-show as U.S. prosecutors investigated corruption in soccer's governing body. While the U.S. added a fourth star to its jersey, Germany is the only other nation that has even two.

With confidence and brashness that some critics called even arrogant -- triggering a backlash that the angry response was sexist -- many analysts agreed the American team established a standard of excellence that exceeded the U.S. champions of 1991, 1999 and 2015, becoming a goal for all others to match. Former U.S. players joined the current generation on the field for the postgame celebration.

Rapinoe was given a standing ovation by the crowd when she subbed out in the 79th minute. The crowd of 57,900 at Stade de Lyon for Le Grand Finale included French President Emmanuel Macron.

Fox News' Adam Shaw and The Associated Press contributed to this report.