PHOENIX - The City of Goodyear was celebrating after the West Valley city put the finishing touches on a deal with Nike, but now those plans might be in jeopardy due to outrage over another Nike story making headlines. 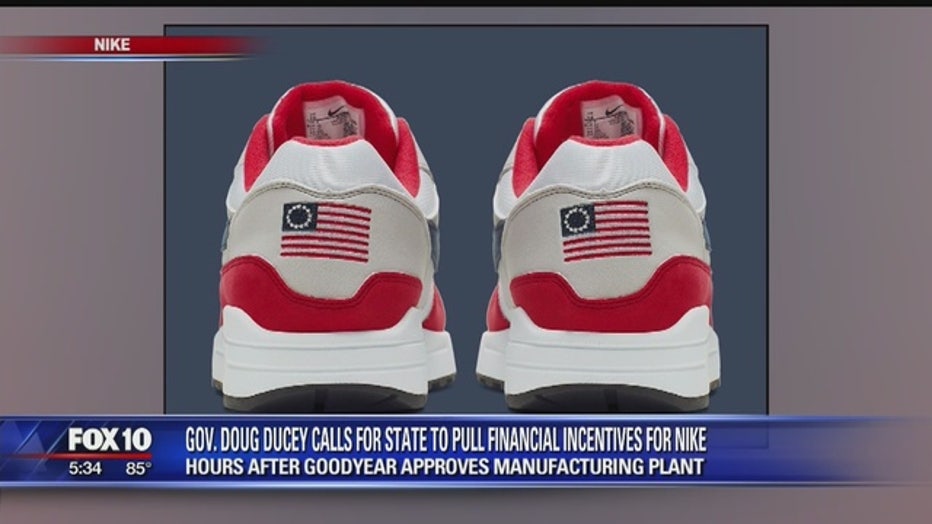 Words cannot express my disappointment at this terrible decision. I am embarrassed for Nike. 3/

The new Air Max 1` Quick Strike Fourth of July, which featured a Betsy Ross flag, was supposed to go on sale Monday, but Nike nixed the design after former NFL quarterback turned activist, Colin Kaepernick, told the company that he and others felt the shoes were an offensive symbol because of its connection to an "era of slavery."

The same day Goodyear approved a multi-million dollar manufacturing plant in the city. Nike is expected to produce its mid-sole cushioning portion of its athletic shoes that are seen on the well-known Nike Air shoes at the facility resulting in more than 500 jobs with an average salary of more than $48,000 a year.

In his tweets, Ducey said he was disappointed in Nike's "terrible" decision, and he was embarrassed for the company.

Arizona's economy is doing just fine without Nike. We don't need to suck up to companies that consciously denigrate our nation's history. 8/

He also said that the country's system of free enterprise allows Nike to prosper and flourish, but Nike has bowed to the "current onslaught of political correctness and historical revisionism."

Ducey stated he has ordered the Arizona Commerce Authority to withdrawal all financial incentive dollars under their discretion that the state was providing for the company to locate here.

The Arizona Commerce Authority responded to Fox 10's request for comment with this statement from Susan E. Marie, the Executive Vice President, Strategy:

"At the Governor's direction, we are withdrawing an up to $1 million grant from the Arizona Commerce Authority Fund. Unlike other programs in statute that are eligible to any and all companies, including Nike--this is purely discretionary."

"We regularly make business decisions to withdraw initiatives, products and services. NIKE made the decision to halt distribution of the Air Max 1 Quick Strike Fourth of July based on concerns that it could unintentionally offend and detract from the nation's patriotic holiday.

Nike is a company proud of its American heritage and our continuing engagement supporting thousands of American athletes including the US Olympic team and US Soccer teams. We already employ 35,000 people in the U.S. and remain committed to creating jobs in the U.S., including a significant investment in an additional manufacturing center which will create 500 new jobs."

"The city of Goodyear has found itself in the middle of a difficult situation. Today, much has unfolded. I can appreciate the emotion and discussion that I've heard on this important topic.

Last night, the Goodyear City Council unanimously approved a job creation agreement with Nike. This deal is expected to bring more than 500 jobs and a significant investment to the city.
We will honor the commitment we made in our agreement.

It has been a focus of the Goodyear City Council to build a strong economy for years to come and we will continue to work hard to bring the kind of high quality jobs that our residents deserve."