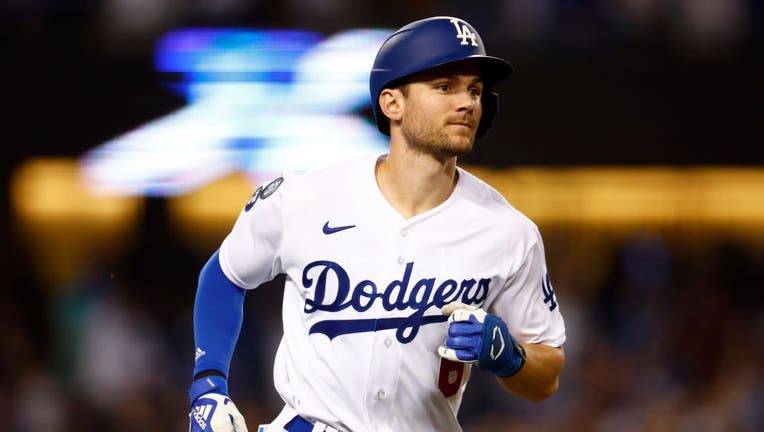 LOS ANGELES, CALIFORNIA - OCTOBER 12: Trea Turner #6 of the Los Angeles Dodgers runs the bases after hitting a solo home run in the third inning in game two of the National League Division Series against the San Diego Padres at Dodger Stadium on Octo

PHILADELPHIA - The Philadelphia Phillies landed Trea Turner on Monday, agreeing to a $300 million, 11-year contract with the dynamic shortstop.

The deal includes a no-trade clause, according to a person familiar with the negotiations who spoke to The Associated Press on condition of anonymity because there was no immediate announcement.

Turner joins a Philadelphia team that made it to the World Series this year before losing to the Houston Astros. He also reunites with slugger Bryce Harper after the two played together with the Washington Nationals from 2015-18.

Turner was terrific in his first full season with the Los Angeles Dodgers, batting .298 with 21 homers and a career-high 100 RBIs for the 2022 NL West champions. He also swiped 27 bases and scored 101 runs.

The free agent market for the talented Turner likely was enhanced by bigger bases and restrictions on defensive positioning coming to the game next year — two changes that make Turner’s athleticism and defensive versatility even more valuable than before.

He turned down a $19.65 million qualifying offer from the Dodgers in November, joining a stellar group of free agent shortstops that also included Carlos Correa, Xander Bogaerts and Dansby Swanson.

Turner and ace right-hander Max Scherzer were traded to the Dodgers in a multiplayer deal at the 2021 trade deadline. Turner hit .338 with 10 homers and 11 steals down the stretch, and Los Angeles made it to the NL Championship Series before being eliminated by Atlanta.

Turner is a .302 hitter with 124 homers, 434 RBIs and 230 steals in 849 games. He has spent most of his career at shortstops, but he also has made big league starts at second base and in center field.