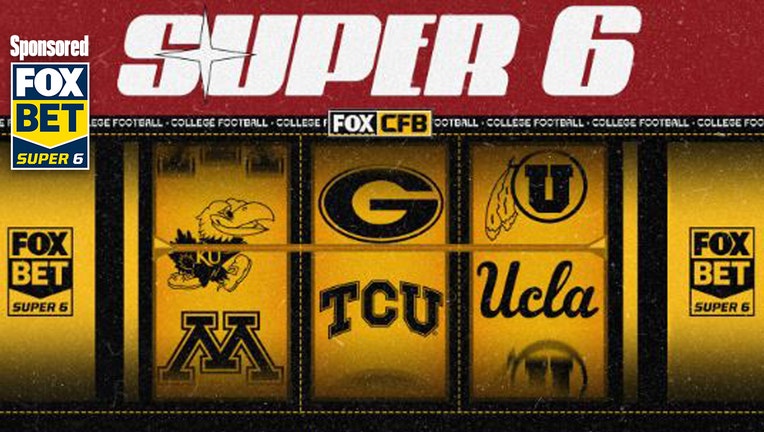 Find out how the $25,000 jackpot could be all yours by playing the FOX Bet Super 6 College Football Pick 6 challenge for Week 12! (FOX Sports)

The penultimate week of the college football regular season. Was it not just yesterday when we were fawning over Oklahoma being ranked sixth in the country? Remember when Syracuse was ranked in the top 15 and gave opponents all the smoke?

Now OU couldn't sniff the Top 25 even if you put Boomer and Sooner's noses right in it, and the Orange have lost four in a row. Good times.

Well, the one constant through these exciting twists and turns of this college football season has been the FOX Bet Super 6 $25,000 College Football Pick 6 contest.

Many people have won cash playing this season, and the money's in the jackpot again this week, ready for you to claim it.

FOX Bet Super 6 is a free-to-play contest. To get in the game for your chance at the $25,000 prize, download the FOX Bet Super 6 app, pick the winners and margins of victory of the six college football marquee matchups and submit your picks before the games kick off on Saturday.

It's free, it's fun and people really do win!

Before you try your luck at becoming our next $25,000 winner, read our predictions below.

Are the Horned Frogs for real? Well, they keep handling business and leaping opponents like they are. The team has a pristine 10-0 record, so maybe it's time to take TCU seriously.

This is the first time since 2010 that the Frogs have been 10-0. As a matter of fact, TCU has already posted five more wins this season than it had all of last season. And the grass will get even greener for the Frogs as they face 6-4 Baylor this weekend.

While the Bears rank second nationally in fourth-down conversions and first in the Big 12 in interceptions, TCU — with all that it does right — will be too tough to muster. The Frogs average 270 passing yards per game and 200 rushing yards per game. They are also on pace to score 567 points this season.

Baylor will put up a fight and keep it tight in Waco, but TCU will come out on top.

Prediction:
TCU by 5 to 6 points

They say it's never wise to bring a cat to a dog fight. Actually, that's not how that saying goes, but if it did, it would apply here. Simply put, the Wildcats need to beware of the Dawgs.

UGA has outscored its opponents 95-9 in the first quarters of games this season. The Dawgs' 40.6 points per matchup is tied for sixth in the country. And when it comes to the red zone, Georgia is good there, too. They've scored in 55 of 56 trips, which ranks first in the nation.

Regarding the history between these SEC East foes, Georgia leads this series 61-12-2 and has won 29-7 in Lexington.

The silver britches have already clinched their SEC Championship date with LSU, so these Dawgs might be too sleepy to beat Kentucky by an incredibly wide margin. So Dawgs on top by a comfortable two scores.

Prediction:
Georgia by 16 to 20 points

FOX Bet has the 6-4 Horns as 9-point favorites over the 6-4 Jayhawks, so according to the odds board, Texas should do-si-do out of David Booth with a win. But after the Longhorns' 17-10 loss to TCU in Week 11, after beating Kansas State by only a score in the game before that, and after their late-game meltdown loss to Oklahoma State in the game before that, we don't trust them.

Kansas, by the way, is averaging 7.3 yards per play, which ranks second in the nation behind Ohio State. Also, the Jayhawks have racked up at least 500 yards of total offense in five games this year.

So even though college basketball has tipped off, don't be afraid to give the Kansas Football Jayhawks a look this weekend.

Prediction:
Kansas by 7 to 8 points

Iowa has a slight edge in this series, owning it 43-42-2. The Hawkeyes have also won seven straight against the Golden Gophers, including 17 of the last 21.

But it's the Gophers we like in this contest.

Minnesota’s rushing defense ranks 13th in the country, the Gophers have the fourth-best scoring defense in the nation and their offense leads the country with the best conversion percentage.

FOX Bet has Minnesota as a 2.5-point favorite. And we expect for everything to go golden for the Gophers at home this weekend.

Prediction:
Minnesota by 7 to 8 points

The battle for bragging rights in the city of LA is here, and, guys, this year, this game actually matters.

Both squads are ranked in the top 20, both are playing for a shot at the Pac-12 conference, and the Trojans — with their No. 7 ranking — could possibly be in contention for a CFP berth.

Which of these cross-town rivals gets the glamorous win in La La Land in Week 12?

Despite USC's 9-1 record, its defense this season has been lackluster, to put it lightly. The Trojans D ranks 78th, allowing opponents an average of 394.2 yards per contest. And now they face UCLA's top-ranked offense. Led by star QB Dorian Thompson-Robinson, the Bruins average 39.5 points per game. They are the only team in the country that has eclipsed 2,400 rushing yards and 2,600 passing yards this season.

Back to this CFP berth that's a stake. Admittedly, it's more interesting when a Pac-12 team is in the mix. However, once the Trojans go down this weekend, the hopes of seeing a squad from the conference in the playoff will be all but dashed. And you can blame that one on the Bruins.

Prediction:
UCLA by 3 to 4 points

After bouncing back so spectacularly after the Week 1 loss to Georgia, the luck of the Duck ran out in Week 11 when they fell to the Huskies 37-34. Utah also lost its Week 1 season opener, falling to Florida 29-26. The similarities don't end there.

Both these Pac-12 teams are 8-2 overall and 6-1 in the conference. And both would love to get this huge conference win this weekend.

Oregon ranks fourth in points per game, is tied for third in red zone touchdowns and ranks first in the fewest sacks allowed. Utah leads the Pac-12 in time of possession, passing yards allowed and total defense.

This will be an epic battle, and it will come down to the wire.

But the Utes will get the best of the Ducks and hand Oregon its second loss in as many weeks.

Prediction:
Utah by 3 to 4 points

Open your FOX Bet Super 6 app and make your selections before Saturday's games kick off. Remember to tag us across all social media platforms at @FOXSuper6 and @EricaReneeD and show us your picks using the #EricaSuper6 hashtag!