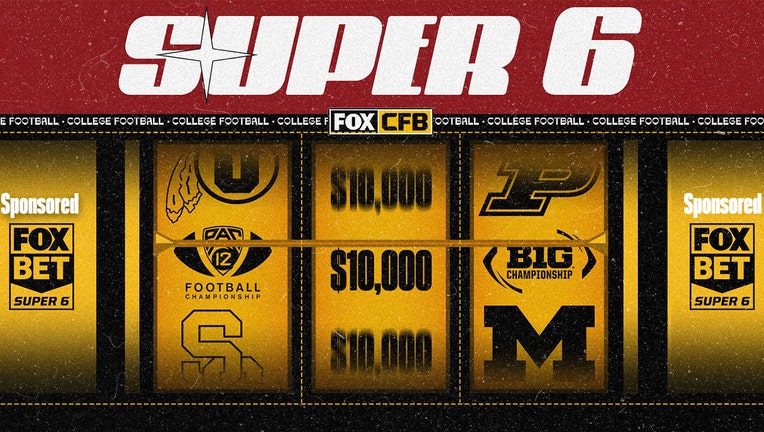 You could win two $10K jackpots playing the FOX Bet Super 6 Big Ten and Pac-12 college football contests. Find out how you could win the big prizes! (FOX Sports)

So let's cut right to the chase.

Because college football championship weekend is so huge, FOX Bet Super 6 is letting you double your chances of winning big in Week 14. The Big Ten and the Pac-12 championship games could end up being your ticket to pocketing some extra cash for the holidays.

The Big Ten and Pac-12 Challenges are free-to-play contests in the FOX Bet Super 6 app where contestants pick six different outcomes from the Purdue-Michigan and Utah-USC marquee matchups. From the team with the longest punt to the total points scored in the game, predict all six perfectly, and you could be on your way to a big payout.

We'll know which teams get into the committee's coveted four by the end of the weekend. And if you play your picks right, by the time the final four are revealed, you could be tens of thousands of dollars richer.

Sounds easy because it is. Sounds fun because winning free money is always a good time. And folks really do win.

We have you covered if you need advice on which selections to make. Before you open up your FOX Bet Super 6 app to make your picks, check out our predictions for both the Big Ten and Pac-12 championship games below!

How many total points will be scored in the game?

The Trojans have the third-highest scoring offense in college football, but the Utes are not too far behind at 14. Simply put, these squads light up the scoreboard. At FOX Bet, the Over/Under is 66.5, and we're thinking Over and then some.

Prediction:
68 to 74 points scored by both teams combined

Which team will have the most tackles and how many will they have?

The Utes are a top-20 defense this season. On the other hand, SC's defense has so many holes in it, we have to marvel at the fact that the Trojans have been so successful.

Utah will win the tackle battle in this Pac-12 showdown.

Which team will have the longest punt and how long will it be?

This will be a high-scoring affair, so we don't anticipate a lot of punts. However, we do predict that these Pac-12 squads will be evenly matched Friday night in the punt game. Take the Utes and Trojans to break even here.

Which team will have the highest kick return average and what will that average be?

We're going with the speed of the Trojans here. We'll even go as far as predicting that SC will run at least one back for a TD. That will really tack on some yards to that average.

Which team will have the longest field goal and how long will it be?

SC's kicker Denis Lynch's longest FG this season has been 49 yards. The longest field goal for Jordan Noyes, Utah's kicker, has been 43 yards. Southern Cal gets the slight edge.

Which team will win and by how many points?

The Utes will try their best to play spoiler in this huge Pac-12 title game. However, the Trojans — in spite of their questionable defense — will ride Caleb Williams and that high-powered offense to a win and into the CFP semifinals.

Colin Cowherd explains why Michigan is the 'tougher program.'

How many total points will be scored in the game?

The Wolverines boast college football's fifth-best scoring offense. Purdue? Well, the Boilermakers are so far down that list that they're almost not even on it. Perhaps we're exaggerating, but Purdue's 26.1 points per game against FBS opponents isn't much to brag about.

Michigan will carry the points load in this one, while Purdue contributes minimally to the total points scored.

Prediction:
48 to 52 points scored by both teams combined

Which team will have the most tackles and how many will they have?

Michigan didn't get to have the second-best defense in the league by missing tackles. Big Blue will smother Purdue all day.

Which team will have the longest punt and how long will it be?

We're going with Purdue here. Boilermaker punter Jack Ansell has a season-long punt of 67 yards. Big Blue's Brad Robbins' longest punt this season was 62 yards. Also, Ansell will probably be punting way more than Robbins in this championship game. So he'll have more opportunities to put that leg to work.

Which team will have the highest kick return average and what will that average be?

This is easy. Michigan will own this spot. Go Wolverines to run over Purdue on offense and special teams.

Which team will have the longest field goal and how long will it be?

Which team will win and by how many points?

Coach Jim Harbaugh & Co. are favored by 16.5 points at FOX Bet, and they're rolling right into back-to-back trips to college football's semifinals. After the thrashing the Wolverines put on Ohio State at The Shoe, we have no doubt they'll do the same — or worse — to the Boilermakers.

Prediction:
Michigan by 19 to 21 points

Now, it's your turn to cash in!

After you download the app and submit your selections for both contests, remember to share your picks with us by tagging @FOXSuper6 and @EricaReneeD and using the #EricaSuper6 across all social media platforms.

Let's get lucky and win these jackpots!