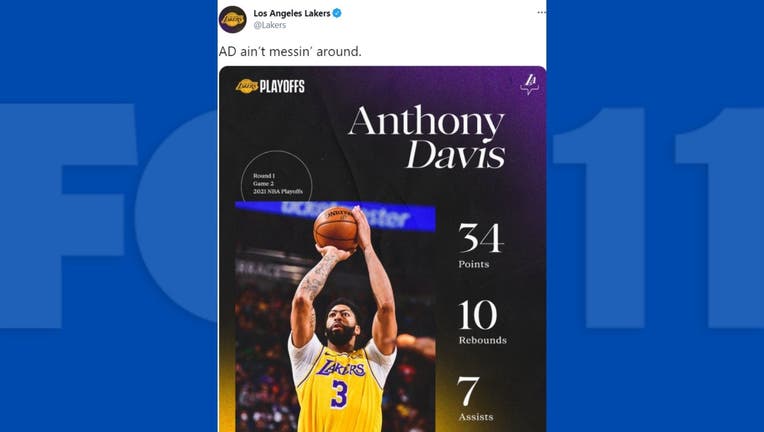 PHOENIX, Ariz. (KTTV) - Anthony Davis and the Los Angeles Lakers bounced back Tuesday to beat the Phoenix Suns 109-102 to avoid a 2-0 series hole in Game 2.

Davis roared back into All-NBA form for Game 2, finishing with 34 points and 10 rebounds in the road win. The Lake Show returns to Staples Center Thursday with the best-of-7 series now tied at 1-1.

LeBron James finished the game with 23 points, 9 assists and 4 rebounds for the Lakers.

Davis' performance Tuesday night more than atoned for his underwhelming Game 1 performance. Although Davis had three blocks in the series opener, he finished Sunday's game with a pedestrian 13 points and 7 rebounds, making 5 of 16 field goals in the team's 99-90 loss.

The Lakers locked in the Western Conference seventh seed after beating the Golden State Warriors 103-100 in the play-in tournament. The reigning NBA champs finished the COVID-shortened regular season with a 42-30 record.

The Suns secured the second seed after finishing the season with a 51-21 record. Phoenix's ended the franchise's 11-year playoff drought after clinching the playoffs earlier this spring.