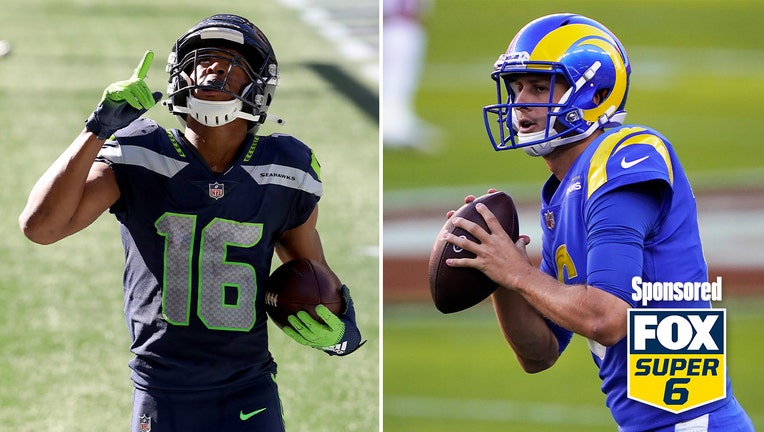 LEFT: Tyler Lockett #16 of the Seattle Seahawks celebrates in the end zone after scoring a touchdown against the Dallas Cowboys during the second quarter in the game at CenturyLink Field on September 27, 2020 in Seattle, Washington. (Photo by Abbie P

Another week in the NFL, another chance to become a millionaire with FOX Super 6.

Nobody picked a winner of all six games of FOX’s Super 6 contest, meaning a rollover for another week of the $1 million jackpot.

Here’s the six games to pick for this coming week:

Aaron Rodgers looked very comfortable last weekend in beating down an injury plagued 49ers, throwing for  305 yards and four touchdowns with no interceptions in a 34-17 Packers win. He gets to feast on the Jaguars, who entered Monday night with the second worst percentage of passing yards per attempt allowed at 8.5 – just ahead of New England’s 8.6. The Jags will start Jake Luton at quarterback with Gardner Minshew still out with a thumb injury.

This could be a battle of backup quarterbacks- or in Washington’s case, third string quarterback Alex Smith, who will replace Kyle Allen (ankle) under center for the near term. Meanwhile, the biggest question for Detroit is the status of Matthew Stafford, who was in COVID-19 protocols last week and now entered concussion protocols. The person to really keep an eye on is Washington receiver Terry McLauren, who had 115 yards and a touchdown in Sunday’s loss to the Giants and is on a 100 catch pace for a really bad team.  The Lions have allowed 29 plays of 20-plus yards – among the worst in the NFL.

Who wins this NFC matchup? With FOX Super 6, you could pick the winner of six NFL games and take a crack at $1 million. Download the app today.

Houston completed its sweep of Jacksonville this week- the only team they have beat in the first six weeks. Lost in Houston’s troubles, however, has been the strong season that DeShaun Watson has put up. Watson is on a 4,700 yard pace for the season with 17 touchdowns thrown and only six interceptions. Meanwhile, Cleveland returns from the bye and a stinging loss to the Raiders at home before it. Baker Mayfield will need to take advantage of a Texans defense that is allowing 430 yards per game.

Three weeks after playing a sloppy but close Thursday night game won by Philadelphia 22-21 in South Philly, the Eagles have a shot to take the division by the horns and get above .500 after nine games. They need a better Carson Wentz, who was awful in Philadelphia’s last game before the bye in a win over Dallas. Meanwhile, the Giants beat Washington this past weekend and continue to show a little bit of fight. A win would move the Giants just a half-game behind the division lead with Philadelphia still staring down games at Cleveland, at Green Bay, New Orleans, Seattle and at Arizona in the second half of the year.

With FOX Super 6, you can bet and take a shot at great prizes. If you win all six games, you can win a million dollars. Download the app at the App Store or Google Play.

Not all losses are equal. Carolina was game for a long time Sunday in Kansas City before falling 33-31. Yet, the Panthers have lost four in a row and desperately need to find some answers. Meanwhile, Tom Brady and the Bucs were flat out awful in a 38-3 home thumping at the hands of the New Orleans Saints. Tampa’s offense looked completely out of synch – perhaps an element of having Antonio Brown fly into the mix for the first week. Another week of practice could be key for Brady and the Bucs, who need this game to stay on pace in the NFC South.

This is the first of two late season meetings between these two teams- the second will be in Seattle on Dec. 27- and this could easily be a swing game in the division. For as good as Russell Wilson has been, the Seahawks have been a mirage. Seattle’s defense has allowed 2,897 passing yards through the air in eight games. That could be trouble against Jared Goff, who has been as consistent this year as any quarterback in the lead. This is a fulcrum game in this division- a Seattle win likely starts the process of putting it away. A Rams win opens the door for them and the Cardinals to make a move before the end of this.

It’s a big game for both teams and it could be a huge game for you on the FOX Super 6 app. If you pick that game and the five others correctly, you could win $1 million. It’s free to play, so download today at the App Store or Google Play.