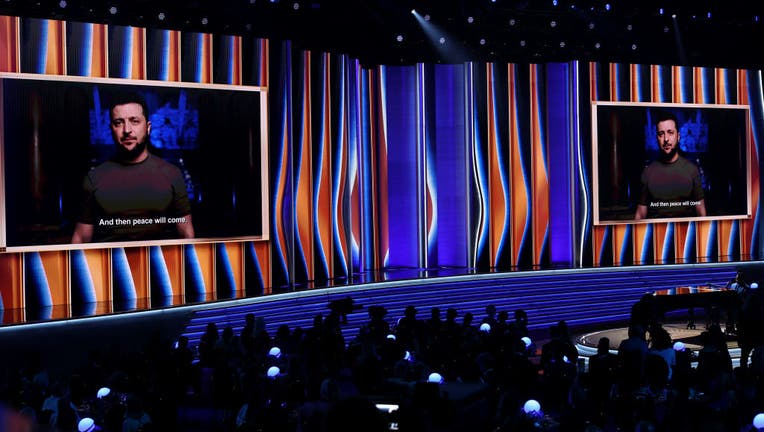 During a pre-taped appearance that aired on Sunday, Zelenskyy addressed the ongoing war with Russia, asking viewers for support in telling the story of Ukraine’s invasion by Russia.

Zelenskyy likened the invasion to a deadly silence threatening to extinguish the dreams and lives of the Ukrainian people, including children.

Zelenskyy went on to add, "On our land, we are fighting Russia which brings horrible silence with its bombs. The dead silence. Fill the silence with your music. Fill it today. Tell our story."

Zelenskyy also added, "Support us in any way you can. Any - but not silence."

According to Variety, Zelenskyy filmed the pre-taped segment within the last 48 hours from a bunker in Kyiv. 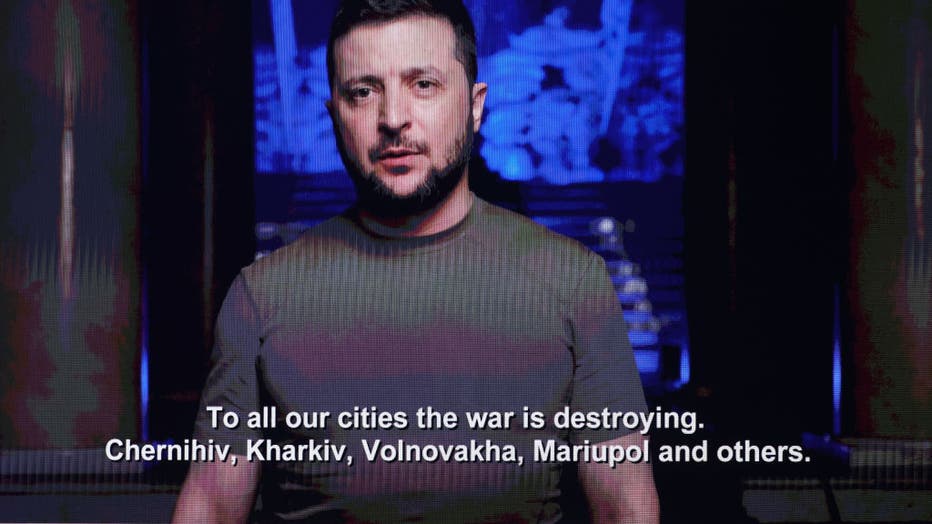 "On our land, we are fighting Russia which brings horrible silence with its bombs. The dead silence. Fill the silence with your music. Fill it today. Tell our story."

Zelenskyy's appearance was followed by a performance led by John Legend and Ukrainian musicians, Siuzanna Iglidan and Mika Newton, as well as poet Lyuba Yakimchuk.

Images from the war were shown on screens behind them.

Newton sang "Free" by Legend alongside Iglidan. Newton is from Burstyn, Ukraine. The Grammys went on to mention that her sister is currently back home serving in the Ukraine army as they fight against Russia.

During the performance, Iglidan played the bandura, a plucked-string Ukrainian instrument, while Legend was on the piano.

Iglidan, who is from Odesa, Ukraine, shared photos leading up to her big performance on Sunday, captioning the images, "I’m sitting on the middle of this stage in front of all these famous musicians — Lady Gaga, John Legend, many, many others," she said.

She continued: "I got on stage and looked at this huge theater and barely holding my tears, started crying. I could not stop my emotions because I’m there in front of all the U.S. showing how beautiful Ukraine culture and music sounds like."

Yakimchuk was also on stage during the Grammy's performance on Sunday night. The Grammys noted that Yakimchuk had fled Donbas.

Zelenskyy and the performance received a standing ovation.

During an interview earlier on Sunday, Zelenskyy  reacted to disturbing new images coming out of a suburb of the capital Kyiv showing the bodies of executed civilians by calling Russia's attacks "genocide."

"Indeed, this is genocide," Zelenskyy said during a "Face the Nation" interview on CBS. "The elimination of a whole nation, and the people -- we are citizens of Ukraine."