Thousands of cards flooded in for Capt. Tom Moore, who celebrated his 100th birthday on April 30 and raised some 30 million pounds for England’s health system.

BEDFORD, England - A British World War II veteran who raised more than $37 million for the country’s National Health Service amid the COVID-19 pandemic received a heartwarming celebration to mark his 100th birthday.

Capt. Tom Moore completed 100 laps of his 25-meter garden earlier this month as part of a challenge in honor of his centennial birthday on April 30. As a way to thank the doctors and nurses who took care of him when he broke his hip, Moore’s family used social media to seek donations to support health care workers.

But as he walked, using a walker with each step, the public watched and just kept donating. 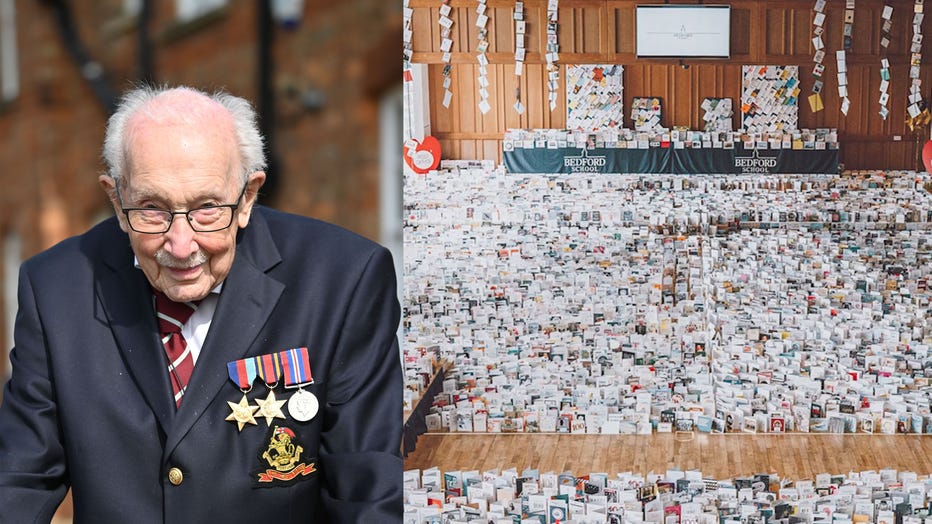 British World War II veteran Captain Tom Moore poses doing a lap of his garden in the village of Marston Moretaine, 50 miles north of London, on April 16, 2020, alongside the hall at Bedford School covered in cards sent to the veteran to mark his 100

Along with monetary donations, more than 125,000 cards also flooded in to celebrate the army veteran’s birthday. A timelapse video shows the cards being set up at Bedford School, which Moore’s grandson, Benjie Ingram-Moore, attends in England.

One of the birthday cards even came from Queen Elizabeth II.

Ingram-Moore, 16, has managed the social media operation for his grandfather’s fundraiser and described how much the response meant to him and his family.

“The volume of cards that have been sent to grandad is just astonishing,” Ingram-Moore told Storyful. “So many of the cards are truly heartfelt with thousands from young children who have taken the time to use their artistic talent and write a personal message … We are hugely proud of how the nation has taken grandad to its heart.”

“Words can’t express how much I idolize him,” Ingram-Moore said.

Moore received a Pride of Britain Award on April 23 for his fundraising efforts, an honor given to those who have acted bravely or extraordinarily in challenging situations.

Prime Minister Boris Johnson described him as a "point of light'' to a country locked down due to the coronavirus.

“You have touched our hearts, lifted our spirits and enabled millions to show their support for the wonderful men and women of our unique NHS,'' Johnson said. ”Because of their extraordinary courage and dedication our country will get through this difficult time and, in doing so, fulfill your optimism that tomorrow will indeed be a better day."

Capt. Tom Moore is 99, and he has raised millions of pounds for the U.K. NHS by walking laps in his garden.

Moore said his legs “may be tired,” but his “mind is racing” and hopes to come up with other ways in which he can help people. He thanked the public for their generosity.

“I felt a little frustrated and disappointed after I broke my hip and it knocked my confidence,’’ he said. “However, the past three weeks have put a spring back in my step. I have renewed purpose and have thoroughly enjoyed every second of this exciting adventure, but I can’t keep walking forever.”