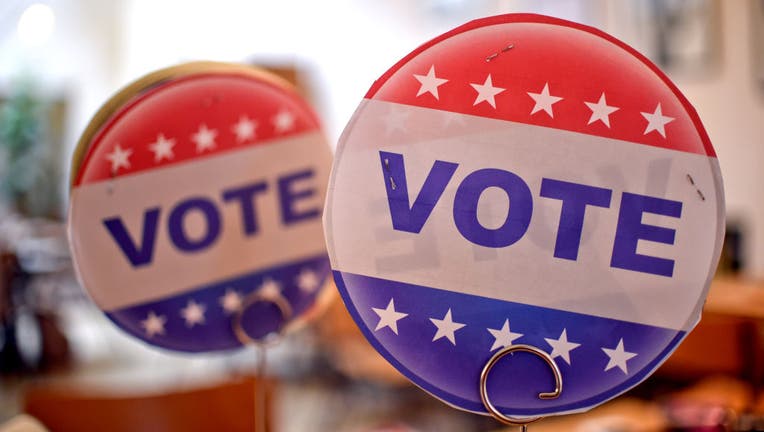 LOS ANGELES - Twelve statewide propositions appear on the California ballot for the November 3 election and voters will decide what becomes law. Those measures cover an array of topics including criminal justice, affirmative action, and the state's gig economy.

Here's an overview of the proposed state laws that voters directly control with their ballot.

Proposition 14 would allow California to sell $5.5 billion in general obligation bonds for continued stem cell and medical research. The measure builds on Prop 71 that was enacted by voters in 2004 to support stem cell research and authorized $3 billion in bonds. According to the League of Women Voters of California, almost all the funds from the sale of the bonds authorized by Prop 71 have been spent.

Yes on Prop 14: This means California could sell $5.5 billion in general obligation bonds primarily for stem cell research and the development of new medical treatments.

No on Prop 14: A "no" vote opposes the sale of the bonds for stem cell research.

Proposition 15 would raise taxes on business properties with a value of $3 million or more. The measure would repeal portions of Proposition 13, the landmark 1978 ballot initiative that changed how California assesses property taxes. Supporters say the change will generate an additional $12 billion for struggling local government and public school budgets that depend on property taxes for most of their revenue. But opponents say the measure will hurt businesses during a pandemic-induced economic recession that has already cost millions of people their jobs.

The Pros and Cons of Prop 15

We profile Prop 15 which has been called the biggest change to California's tax system in a generation. It will hike property taxes on big businesses raising billions for schools and local governments.

Yes on Prop 15: Property taxes on most commercial properties worth more than $3 million would go up in order to provide new funding to local governments and schools.

No on Prop 15: Property taxes on commercial properties would stay the same. Local governments and schools would not get new funding.

Proposition 16 would enable public agencies to consider diversity in decision-making policies. If approved, the proposition would repeal Proposition 209, approved by voters in 1996, that made it unlawful for California’s state and local governments to discriminate against or grant preferential treatment to people based on race, ethnicity, national origin, or sex. In other words, Prop 16 would re-introduce affirmative action in California.

Proposition 16 to restore affirmative action is on the California ballot

Proposition 16 to restore affirmative action is on the ballot in California for November 3, 2020. Affirmative action would allow universities and government offices to factor in someone's race, gender, or ethnicity into hiring, spending and admissions decisions.

Yes on Prop 16: State and local entities could consider race, sex, color, ethnicity, and national origin in public education, public employment, and public contracting to the extent allowed under federal and state law.

No on Prop 16: The current ban on the consideration of race, sex, color, ethnicity, and national origin in public education, public employment, and public contracting would remain in effect.

RELATED: Proposition 16 to restore affirmative action is on the California ballot

Proposition 17 would restore voting rights to an estimated 50,000 people who have completed their prison sentences and are on parole. Supporters say parolees have paid their debt to society and should be able to choose their representatives and shape the policies that affect their daily lives. However, some opponents argue that restoring rights early to felons is a slap in the face to their victims, who should have the assurance that criminals are punished fully.

Many people wrongly believe they cannot vote if they are in jail or have been convicted of a felony. As it stands, only people who are currently on parole, are serving a state prison sentence, or are mentally incompetent cannot vote.

Proposition 17 would allow people on parole to vote in California

Proposition 17 is on the California ballot, and it would amend the State Constitution, allowing people on parole in the state to vote which is currently not allowed.

Yes on Prop 17: People on state parole who are U.S. citizens, residents of California, and at least 18 years of age would be able to vote if they register to vote.

No on Prop 17: People on state parole would continue to be unable to vote in California.

RELATED: Proposition 17 would allow people on parole to vote in California

Proposition 18 would allow 17-year-olds to vote in primary elections if they turn 18 before the general election. Currently, California voters must be at least 18 at the time of an election to cast their ballot.

The Election Integrity Project California, the main opponent to Prop 18, says that 17-year-olds are still considered children under the law and have no business deciding elections.

No on Prop 18: No one younger than 18 years of age may vote in any election.

Proposition 19 would allow homeowners who are 55 and older, disabled or wildfire victims to transfer a primary residence’s tax base to a replacement home. It would also tighten the rules around homes that are inherited from parents and grandparents. Currently, homes that are passed down can keep the same tax rate without it resetting to market value. Under Proposition 19 that could change. Beneficiaries must live in the inherited home or they forfeit the tax break.

Proponents of the ballot measure said seniors would be able to downsize into smaller homes and that would, in turn, free up housing inventory, as CalMatters reports. And closing inheritance tax break would generate tens of millions of dollars in property tax revenue. The new revenue would be spent on local and state resources.

Some opponents of the measure say children who inherit their parent's or grandparent's home could be the biggest losers, according to the Los Angeles Times. If they intended to keep the property as a second home or rental, meaning it's not their primary residence, their property taxes would increase.

Proposition 20 would amend criminal sentencing and supervision laws enacted during the last administration of Gov. Jerry Brown that critics say are too favorable to criminals. The initiative would reinstate the list of crimes for which a perpetrator’s DNA is collected, allow repeated thefts of property worth $250 or more to be prosecuted as felonies, and toughen parole and supervised release standards.

Yes on Prop 20: People who commit certain theft-related crimes such as repeat shoplifting could receive increased penalties like longer jail terms. Additional factors would be considered for the state’s process for releasing certain inmates from prison early. Law enforcement would be required to collect DNA samples from adults convicted of certain misdemeanors.

No on Prop 20: Penalties for people who commit certain theft-related crimes would not be increased. There would be no change to the state’s process for releasing certain inmates from prison early. Law enforcement would continue to be required to collect DNA samples from adults only if they are arrested for a felony or required to register as sex offenders or arsonists.

The measure would allow for local governments to enact rent control measures on properties that are more than 15 years old. People who own one or two single-family homes would be exempt from the measure. Supporters say the measure is a critical attempt to slow rent increases and prevent homelessness. But critics say it will dampen sorely-needed new construction.

Yes on Prop 21: State law would allow cities and counties to apply more kinds of rent control to more properties than under current law.

No on Prop 21: State law would maintain current limits on rent control laws cities and counties can apply.

The ballot measure would classify app-based rideshare drivers for Uber and Lyft as well as delivery and delivery drivers, like those who work for DoorDash and Postmates, as independent contractors. The proposition would exempt them from following Assembly Bill 5 or AB5, which went into effect in January, requiring these so-called Transportation Network Companies (TNC) to treat drivers as employees.

Prop 22 would mean app-based delivery companies do not have to provide drivers with employee benefits such as minimum wage, overtime, unemployment insurance and workers' compensation that they had just obtained through AB5.

Proposition 22 is actually a battle that started when Assembly Bill 5 which was signed into law last year.

Uber and Lyft have shelled out a record $190 million to back Proposition 22.

Yes on Prop 22: App-based rideshare and delivery companies such as Uber and Lyft could hire drivers as independent contractors. Drivers could decide when, where, and how much to work but would not get standard advantages and protections that businesses must provide employees.

No on Prop 22: Uber and Lyft would have to hire drivers as employees if the courts say that AB5 must be upheld. Drivers would have less choice about when, where, and how much to work but would get standard benefits and protections that businesses must provide employees.

What’s at stake in battle over gig economy

Proposition 23 would require the state's 600 dialysis clinics to have a doctor, nurse practitioner, or physician assistant on-site during treatment hours. Health care workers say it would improve patient care, but opponents say the law would create a financial burden that could force some clinics to close.

Yes on Prop 23: Chronic dialysis clinics would be required to have a doctor on-site during all patient treatment hours.

No on Prop 23: Chronic dialysis clinics would not be required to have a doctor on-site during all patient treatment hours

Proposition 24 would expand provisions under California's Consumer Privacy Act (2018) that gave residents more control over their personal information collected online. It limited how companies could gather users' personal data and make money from it and allowed consumers the right to opt-out of the sale of their information.

Proposition 24 would establish the California Privacy Protection Agency, with an annual budget of $10 million, to enforce the law and fine companies that violate user protections.

Yes on Prop 24: Existing consumer data privacy laws and rights would be expanded. Businesses would be required to meet privacy requirements would change. A new state agency and the state’s Department of Justice would share responsibility for overseeing and enforcing state consumer privacy laws.

Prop 25: Getting rid of cash bail

If approved, Proposition 25 would eliminate cash bail and make California the first state in the nation to do so. No one would pay bail and most misdemeanor suspects would remain free before trial. San Francisco already moved forward with ending cash bail in January.

Under Prop 25, those suspected of felonies or misdemeanor domestic violence, sex offenses or driving while intoxicated would be evaluated for their perceived risk of committing another crime or not appearing in court. Most would eventually be released without paying bail, unless they are accused of certain crimes like murder or arson, or if a judge finds there are no conditions like electronic monitoring that could assure their appearance at future hearings.

However, opponents believe there is a strong likelihood that some newly freed suspects would be arrested for new crimes.

Yes on Prop 25: No one would pay bail to be released from jail before trial. Instead, people would either be released automatically or based on their assessed risk of committing another crime or not appearing in court if released. No one would be charged fees as a condition of release.