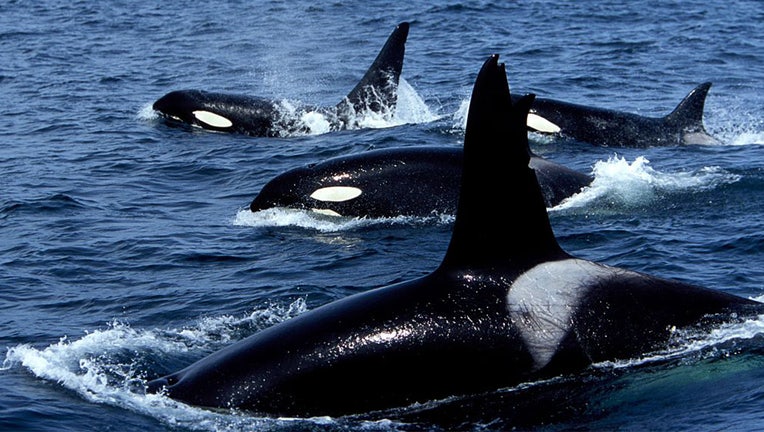 A research and conservation team based in South Africa claims it has captured the first detailed video evidence of orcas, also known as killer whales, hunting white sharks, according to a recent study.

"This behavior has never been witnessed in detail before, and certainly never from the air," said lead author Alison Towner, a senior shark scientist at Marine Dynamics Academy in Gansbaai, South Africa, in a news release.

The footage only shows one hunting event but scientists believe at least three white sharks were killed.

While killer whales have been observed hunting other shark species in the wild, this is the first time they were witnessed hunting white sharks in the Mossel Bay area, the news release continued.

The study also highlighted the evasive tactics the white sharks took in order to avoid predation, also known as their flight response, which has never been observed before.

On two other occasions, researchers witnessed killer whales slowly approach their prey but instead of fleeing, the sharks would stay very close to the whales, "keeping it in view." This is a common strategy among other orca prey such as seals and sea turtles, researchers said.

"We first observed the flight responses of seven gills and white sharks to the presence of killer whales Port and Starboard in False Bay in 2015 and 2017. The sharks ultimately abandoned former key habitats, which has had significant knock-on effects for both the ecosystem and shark-related tourism," said South African National Parks’ shark expert and marine biologist, Dr. Alison Kock.

Unfortunately for the white shark shown in the footage, killer whales like to hunt in groups and researchers speculate the evasive tactics taken on by the prey are not as effective as it is outnumbered.

Researchers also noted they recognized a familiar killer whale named "Starboard," was part of the pod that killed the white shark. It was speculated that Starboard was responsible for eating a large chunk of the shark’s liver after bringing it to the surface.

"I first saw Starboard in 2015 when he and his close-associated ‘Port’ were linked to killing seven gill sharks in False Bay. We saw them kill a bronze whaler [copper shark] in 2019 – but this new observation is really something else," said David Hurwitz, a boat-based whale-watching operator from Simon’s Town Boat Company.