LAWRENCE, Kan. - A father and his 12-year-old son are being hailed as heroes after authorities said they helped rescue a drowning, 4-year-old boy with autism from a pool.

Authorities in Lawrence, Kansas said little boy, Xavier Rigney, briefly got out of his mother's sight and somehow made his way through a locked fence before jumping into the pool.

"His head goes completely under the water. His mouth and nose never come up above the water, and that's why we say they don't have the ability to scream," Lawrence-Douglas County Fire Medical Lt. Jeff Krall, a paramedic who lost a child of his own in 2008, explained at a press conference. "What you see with his arms, you see just a little bit of movement, we call it climbing, they're trying to climb out of the water.

That was when 12-year-old Maddox Westerhouse saw what happened and ran to get his father, Tom, from their nearby apartment.

"My friends were yelling at me to go get help and I just went like, 'Oh no,' and ran," Maddox said.

Tom jumped over the 6-foot fence, pulled Xavier from the pool and started performing CPR.

Tom sprang into action, leaping the 6-foot fence then jumping into the pool to pull Xavier out before performing CPR.

"When he started to cough up water and everything, I knew that was a good sign," Tom later recalled. "It definitely hits home a lot harder having a son myself." 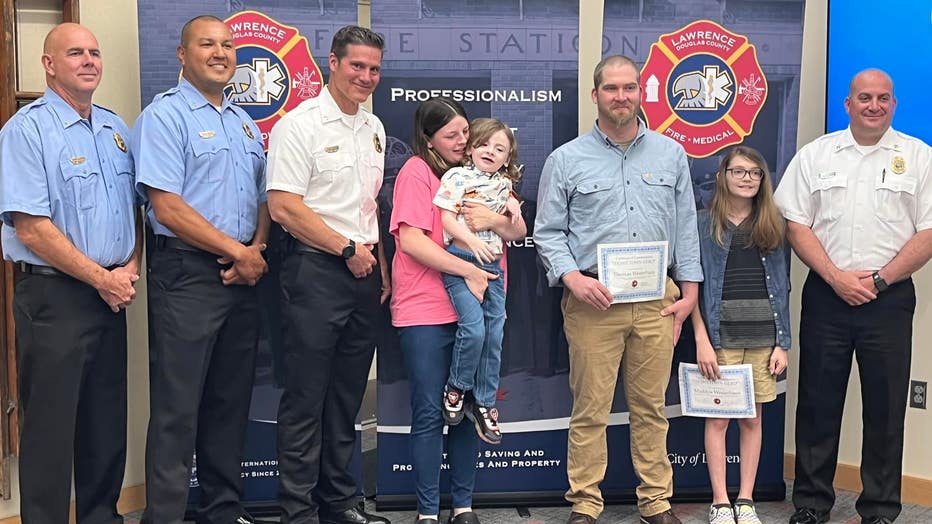 Xavier's mother, Alexis, reunited with Tom and Maddox for the first time on Thursday and thanked them for their heroic actions.

"He's my best friend so I don't know what I would do without him," Alexis said through tears.

According to the American Red Cross, 10 people die each day from unintentional drowning, and on average, two of them are under age 14.

The U.S. Centers for Disease Control and Prevention encourages people to take swimming lessons, install sufficient barriers around swimming pools as well as other prevention methods.