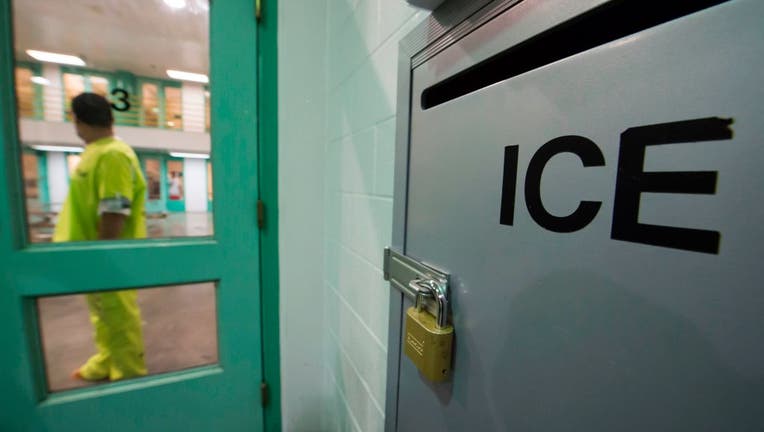 LOS ANGELES - Nearly three dozen people have died in the custody of U.S. Immigration and Customs Enforcement since April 2018, with a seven-fold increase in deaths even as the average daily ICE detainee population decreased by nearly a third between 2019 and 2020, a USC study released Thursday shows.

"Potentially preventable causes of death -- including COVID-19 infection, influenza and suicide -- are responsible for at least half of recent deaths," said researcher Sophie Terp, an assistant professor of clinical emergency medicine at the Keck School of Medicine of USC and a clinical scholar at the USC Schaeffer Center for Health Policy and Economics.

For the study, the USC researchers examined three years of congressionally mandated reports on deaths in ICE custody. Their findings appear in the journal AIMS Public Health.

The death rate -- 10.833 per 100,000 detainees -- is the highest since ICE implemented its Performance-Based National Detention Standards in 2008, researchers said. The findings lend support to civil liberties organizations' longstanding concerns that substandard medical care in ICE facilities has contributed to preventable deaths.

Of the 35 in-custody deaths since April 2018, nine people died by suicide and 26 people died from medical causes. Eight of the medical deaths were attributed to COVID-19, which represents 72.7% of 11 deaths occurring since April 2020.

In one case, a 54-year-old citizen of Mexico fell ill one month after being taken into custody two decades after first entering the United States. A nurse noted that the patient appeared normal "except a heart rate of 103 and pulse oximetry reading of 83%." A normal blood oxygen level is typically between 95 and 100%. Interventions such as supplementary oxygen or emergency transport were not recorded. The man died the following day.

In another case, a 55-year-old Russian citizen detained after nearly 20 years in the United States was put on suicide watch after he said: "If I can't go home, then I just want to kill myself." Over the next year, the man was diagnosed with acute stress disorder, anxiety, insomnia and hallucinations.

Although the man had low blood pressure, he was prescribed medication for high blood pressure. He was eventually hospitalized, diagnosed with small bowel obstruction and anemia, and placed on suicide watch. He left the hospital against medical advice and died the following day.

"Refusing to cooperate with care for a diagnosed bowel obstruction while on suicide watch (raises) questions about the detained individual's capacity to refuse care for a potentially life-threatening condition and whether mental health issues may have been contributory to this death," the researchers wrote.

The researchers noted that most of the COVID-19-related deaths occurred among detained individuals whose age or medical conditions -- including diabetes, chronic kidney disease or lymphoma -- put them at high risk for severe illness and for death from COVID-19.

"Safety measures such as masks, hand hygiene and social distancing can be difficult to implement in often-crowded detention environments," Terp said. "Although the COVID vaccine was not yet available during the study period, immunization should be prioritized for incarcerated populations."

The fact that most of the people who died were detained for more than a month before their deaths suggests conditions in detention, rather than events prior to detention, contributed to premature death, the researchers said. In addition, the average age at death -- 47.3 years -- is markedly lower than the reported life expectancy for foreign-born individuals in the United States, Terp said.

"This is concerning, particularly considering that foreign-born individuals in the United States have a 2.4-year advantage in life-expectancy relative to United States-born population," Terp and her colleagues wrote. "There is considerable room for the improvement of infection control measures, as well as access to and quality of psychiatric care and suicide prevention efforts for individuals in ICE detention."

In addition to Terp, authors of the study include Sameer Ahmed, Briah Fischer, Madeline Ross, Molly Grassini, Elizabeth Burner and Parveen Parmary, all of the Keck School of Medicine.