According to IHME, part of the University of Washington’s School of Medicine, nearly 770,000 lives worldwide could be saved between now and Jan. 1 through coronavirus preventive measures suggested by the CDC, including mask-wearing and social distancing.

LOS ANGELES - The U.S. recorded 71,671 new confirmed cases of the novel coronavirus on Thursday in the highest single-day increase since July, according to a tally by John’s Hopkins University.

Texas, California, Florida, Illinois, Wisconsin, Tennessee, Ohio, North Carolina, Michigan and Indiana were among states that saw the highest increase in new cases, contributing to the nation’s staggering total of 8.4 million. As of Friday, the U.S. had recorded 223,059 COVID-19-related deaths since the outbreak began, with 856 new deaths having been reported on Thursday.

Amid spiking coronavirus cases, patchwork partial shutdowns and social distancing measures to prevent further spread of the virus continue as the country prepares for what medical experts warn will likely be a deadly winter marked by coalescing epidemics: the flu and the coronavirus.

In South Dakota, the Oglala Sioux Tribe is locking down the Pine Ridge Indian Reservation for one week in response to surging coronavirus cases in the state. Tribes nationwide have taken an aggressive approach to preventing infections amid concerns Native Americans could be particularly vulnerable to the coronavirus.

The lockdown comes as South Dakota surpassed 9,000 coronavirus cases on Thursday and reported an all-time high of 973 cases and 14 deaths in one day. October has been South Dakota’s deadliest month, with 124 of the 347 deaths.

Massachusetts ordered the shutdown of all indoor ice skating facilities in the state for two weeks in response to several coronavirus clusters linked to ice hockey games and practices.

There have been at least 30 coronavirus clusters associated with organized ice hockey activities, involving residents from more than 60 cities and towns in the state, the state’s health department said.

In Idaho, members of a regional health department board voted Thursday to repeal a local mask mandate even after hearing reports of a local hospital being overwhelmed. 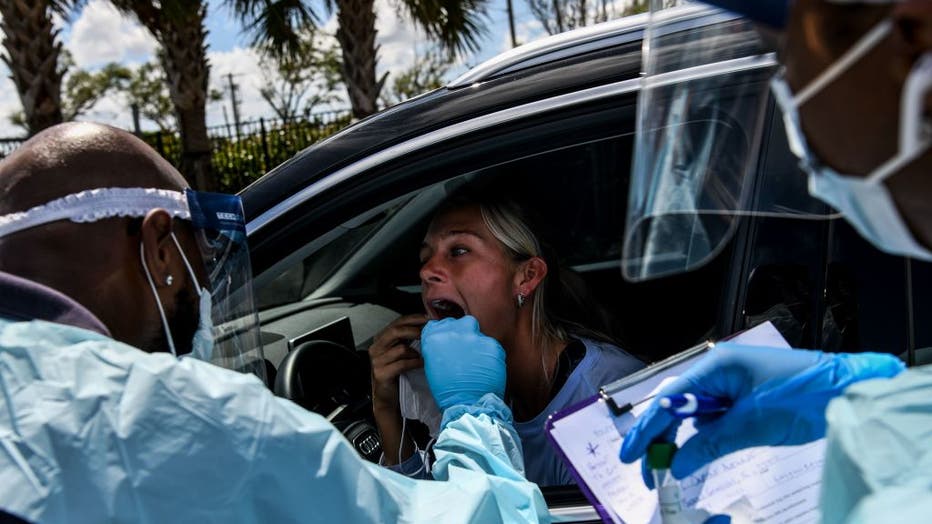 FILE - A medical personnel member takes samples on a woman at a "drive-thru" coronavirus testing lab.

The hospital in Coeur d'Alene reached 99% capacity a day earlier, even after doubling up patients in rooms and buying more hospital beds. Idaho is one of several states where a surge of COVID-19 infections is overwhelming hospitals, likely in part because cooler weather is sending people indoors, U.S. health officials said.

Idaho reported 987 new COVID-19 cases Thursday, according to a tally by Johns Hopkins University, bringing the total to more than 56,600 since the pandemic began. Infections are thought to be higher because a lack of testing and other factors. At least 553 people have died of the virus, including seven reported Thursday.

California's oldest prison, San Quentin, home to its death row, was the site of one of the nation's worst coronavirus outbreaks, with 28 inmate deaths and 2,200 infections at its peak — about 75% of the inmate population. Nearly 300 employees were sickened and one died, though all but nine employees are now back to work.

Puerto Rico has reported more than 29,700 confirmed cases of coronavirus infections. It has had more than 770 deaths from COVID-19, the disease that can be caused by the virus.

FOX News and the Associated Press contributed to this report.